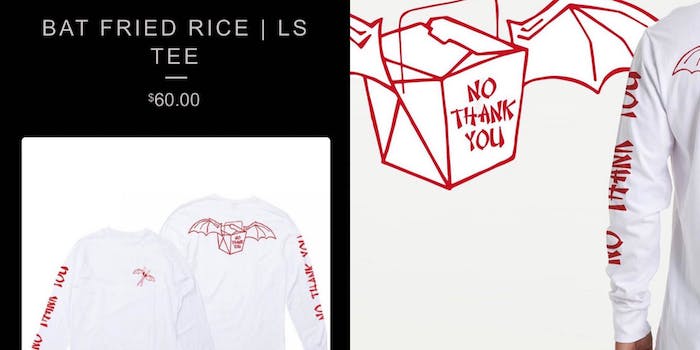 'The image and the post were inappropriate and inexcusable.'

Exercise apparel company Lululemon issued an apology Tuesday after one of its art directors shared a racist T-shirt design on Instagram, Reuters reports.

California artist Jess Sluder designed the shirt, which depicted a pair of chopsticks with bat wings on the front and a Chinese takeout box with bat wings and the words “No Thank You.”

“Where did COVID-19 come from? Nothing is certain, but we know a bat was involved,” Sluder wrote in the Instagram caption, according to screenshots. “Beginning today, my limited edition #quarantees are now available. … Thank you for your support and sense of humor!”

Lululemon issued an apology and wrote that Fleming is no longer employed at the company.

“We apologize that an employee was affiliated with promoting an offensive t-shirt, and we take this very seriously,” Lululemon wrote in a comment on Instagram. “The image and the post were inappropriate and inexcusable.”

Fleming, whose Instagram account is now private, apologized in his bio and wrote that he did not design the T-shirt or take part in its creation.

Sluder, who did not immediately respond to the Daily Dot’s request for comment, apologized in an Instagram comment, writing that the shirts were never produced, and the intent was never to profit from them.

“Lulu and the employee had absolutely no involvement,” Sluder wrote. “Of course, at this point, I am seeing all of this from a different perspective. The racial aspect of this honestly had not occurred to me, which is clearly something I need to explore further.”

Anti-Asian xenophobia and racism have been rampant online following outbreaks of the deadly coronavirus, which first emerged in Wuhan, China.

Actress and entrepreneur Dorothy Wang said she felt she had to speak up about the T-shirt design in order to avoid production and distribution, NextShark reports.

“I was completely shocked and disgusted that people took the time and energy to create such a hateful and racially charged shirt, and were proudly marketing it in hopes of profiting off of the current xenophobia against Chinese/Asians due to the coronavirus,” Wang told NextShark.

Lululemon did not immediately respond to the Daily Dot’s request for comment.