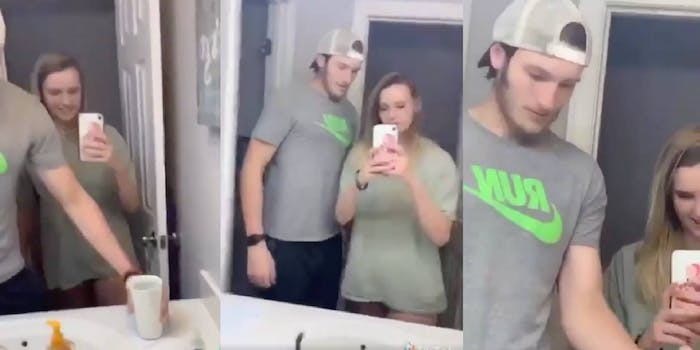 'I believe blacks are human too,' says the teen, who is begging people to stop sharing the video and calls the backlash 'not fair.'

Last week, two high school students were expelled after a racist video, which they recorded and posted to TikTok, began making the rounds online.

The forces of the internet quickly coalesced to bring down harsh punishment upon the teens in question, Stephanie Freeman and Jeffery Hume. A fellow student at their Georgia high school flagged the video and helped it go viral. Within a few days, the harsh fallout had led to both students being expelled. The backlash didn’t end there, however, as people online continued what they felt was well-deserved punishment.

Now, Freeman is taking to her own social media pages to plead with the justifiably angry online horde. Several screenshots of what users claim are the teen’s Instagram Story have been shared online, where she claims that she has received death threats from commenters. She also asked people to stop sharing the video with her prospective college, calling the entire situation “not fair.”

“I want to apologize for the abhorrent video I posted,” she began the Instagram Story. She went on to blame her racist actions on Hume, whom she said “slowly normalized his racism” with her. “I believe blacks are human too, made in the image of Christ. I have dissapointed (sic) God and I want to apologize. Please don’t contact my college, it’s my future and one mistake should not ruin a life. Also please stop with the death threats.”

Freeman continued her pleas in several follow-up posts. In one, she promised to dedicate her life to “serving God and treating every human being with respect.” She noted that she did not expect to be forgiven by the public at large. “But I do take issue with one thing,” she wrote. “Hatred does not defeat hatred. Threatening, bullying and cancelling me will not resolve the world’s problems.” She urged readers to “seek God” and find peace. “I understand why people are angry at me, but how will ruining my life change that? My parents live om (sic) fear for my life. This is not fair!”

In the final post shared online, the teen appears to have lost her patience. “For the love of God, stop sharing the video and my name and picture,” she wrote. “You do not know what this feels like. I’ve never been this scared. It just isn’t fair. Imagine you’re a stupid teenager just going along with stupid teenager stuff and then your life gets ruined. Forever. People not caring what’s in your heart or what you’re really like. Only defining you by a stupid video. Please, please stop sharing!”

Freeman’s pleas appeared to fall on deaf ears. In the comment section for a tweet sharing screenshots of her post, people quickly tore into both teens. “Whew…If only she could imagine being hated or being in fear daily for something you couldn’t change or undo such as the color of our skin,” one user wrote. “Ppl not caring what you are/could be. She had a choice, her choice has consequences. She should have thought outside of her bubble. Smh.”

A few people shared screenshots of an Instagram account they claim belongs to Hume. On the page, which has since been deleted, several posts had been made to the story. In one, the user proclaimed, “y’all have ruined my entire life, what’s wrong with you people.” In another post, they wrote, “I worked so hard for my wrestling career now in the blink of an eye it’s gone.”

Following the original, racist TikTok’s discovery, claims that they belonged to the two Georgia teens were investigated by their school. Soon after, Hume received word that he would no longer be welcome on the school’s wrestling team.

The entire situation has continued to escalate over the last several days, ultimately resulting in Freeman’s name trending on Twitter. Users have been dragging the Georgia teen up and down the platform for days now. The resulting tweets are a harsh and unforgiving condemnation of her actions. There is little sympathy to be found.

Many people could not help but highlight the immensely offensive nature of the TikTok. “Looked up that Steph Freeman video that everyone is talking about and holy shit is it so much worse than i thought it would be,” one user wrote. “Like how do you dedicate that much time to a tiktok and not ONCE think ‘maybe not.'”

As the repercussions from the video continue to pile up, Freeman has attempted to shield herself by making her Instagram private and by changing her TikTok handle. Hume has taken similar measures. These attempts will almost certainly fall short in light of the heaps of people online looking to take the duo down.

Freeman did not respond to the Daily Dot’s request for comment.