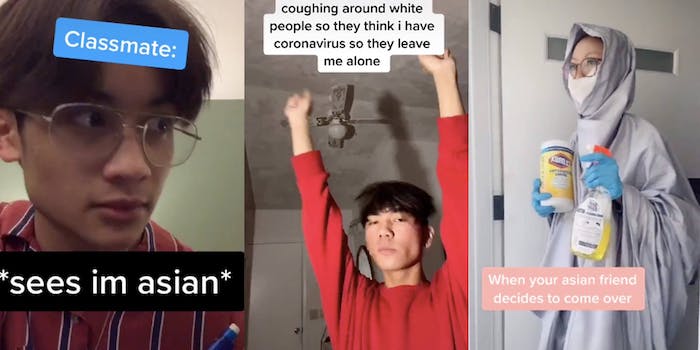 The videos are hilarious. The racism, not so much.

As the death toll from the coronavirus rises and new cases continue to pop up around the world, one side effect has been a staggering increase in racism and xenophobia. But Asian teens are pushing back against this in the way that they do best: through TikTok videos.

While incidents of the virus are now being reported in a growing number of countries, it is believed to have originated in Wuhan, China, with a high rate of cases being reported in China and the surrounding Asian countries. And as people in western countries begin to panic over the thought of contracting the potentially fatal contagion, they’re often turning that fear into a generalized fear of Asian people. Because, you know, racism.

There are plenty of people out there online saying, “Hey, an epidemic that happened to originate in China isn’t an excuse to be racist or xenophobic,” but that isn’t exactly stopping racism in its tracks.

So, Asian teens who are feeling targeted by their peers of other races as potential coronavirus carriers are responding by making videos mocking the ridiculousness of that kind of overt bigotry.

“I can see the racism behind this virus, truly,” 16-year-old David Kim told BuzzFeed News. “Even if it might be a joke from my friends, I am constantly being targeted or laughed at because I am Asian and they think I have the virus.”

The fact that Asian people are facing racism over a disease that clearly doesn’t care where you come from or what your genetics are made up of when it infects you is blatant ignorance. But it’s happening, and some folks are trying their best to joke their way through the unfortunate experience.

But at the end of the day, as enjoyable as these videos may be, they still only got made because people are approaching a worldwide incident with unnecessary hatred and fear. So, even though it’s not a funny video or meme, remember:

“The coronavirus outbreak doesn’t give u the right to be racist & xenophobic towards asian people.”