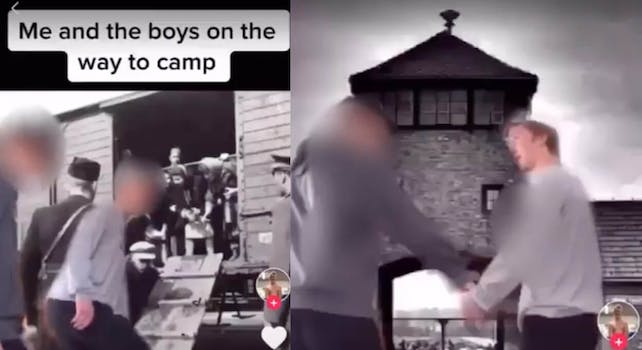 Their punishment is to write an essay on Hitler.

Two high school students are facing backlash over a TikTok video wherein they mocked Jews sent to the Auschwitz concentration camp where more than 1 million people were killed during the Holocaust.

The Nicollet Senior High School students posted a video that was reportedly taken down on Wednesday. The video showed them holding hands, dancing, and pretending to skip to the concentration camp.

At least one outlet reported that the students attend Minnetonka High School, where students have come under fire for sharing anti-Semitic content in the past. But the Daily Dot verified the students who made the TikTok video attend Nicollet Senior High School.

The Auschwitz video is a few seconds long. “Me and the boys on the way to camp,” reads part of the caption, according to a screen recording of the video shared by TC JewFolk, an online media platform for the Jewish community in the Twin Cities. The recording showed that the video had more than 7,000 views by Thursday.

The account that uploaded the video was not active as of Monday afternoon.

Dennis R. Morrow, superintendent of Nicollet Public Schools, wrote a letter to the students demanding an apology. Morrow also demanded they hand in an essay on “Hitler’s Final Solution at Auschwitz” by May 15.

“If you had time to create the video, you have time to write this paper,” Morrow wrote in the letter. He wrote the incident was first brought to light by a university student in Indiana who viewed the video while in quarantine.

Nicollet Public Schools did not immediately respond to the Daily Dot’s request for comment.