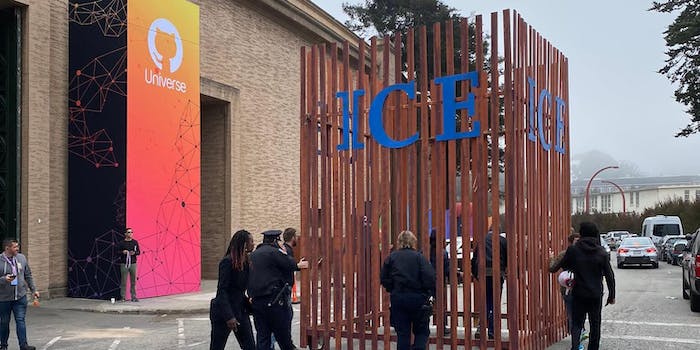 'GitHub has a lot of problems it needs to address. ICE is only the latest.'

A flood of employee resignations and last-minute speaker drops marked GitHub’s annual tech product conference, which is scheduled to conclude Thursday. At least five employees have reportedly left in part due to the company’s controversial work with Immigrations and Customs Enforcement (ICE).

On Wednesday, GitHub engineer Alice Goldfuss announced in a series of tweets that she was resigning and implied the decision was related to GitHub’s ties with ICE.

“GitHub has a lot of problems it needs to address. ICE is only the latest,” she wrote. Goldfuss did not respond to the Daily Dot’s request for comments.

I wish my former coworkers nothing but strength in fighting for what they believe in, against both ICE and internal inequality.

GitHub has a lot of problems it needs to address. ICE is only the latest.

She was applauded online for taking a stance.

I applaud your integrity to act on your values. Those decisions are never easy, and for URMs, also so painful (at the cost of economical stability, career opportunities and more).

It's hard for people to do the right thing, especially in tech because it's so insular and monolithic. Thank you for showing us how. I hope for you and the industry that you do something absolutely phenomenal next 💪

Goldfuss wasn’t the only one. At least five GitHub employees resigned in the buildup to the annual event, GitHub Universe, VICE reported on Wednesday.

“All five cited the ICE contract and management’s handling thereof in their resignations,” a GitHub employee, who isn’t named in the report, told VICE.

GitHub’s decision to renew a $200,000 contract with the border security agency, known for separating immigrant children from their families at the border, received widespread criticism within the company in October.

GitHub CEO Nat Friedman has defended the move, saying the software company has no “professional service” with ICE but lets the agency purchase a server license. Friedman condemned ICE’s policies and announced that the company would pay $500,000 to organizations working in immigrant justice and helping families that have been separated by ICE.

GitHub employees, however, remain wary of any work to do with the agency.

Sophie Haskins, who VICE identifies as the first employee to quit GitHub over its work with ICE, resigned on Nov. 1, a few weeks after Friedman’s announcement.

there are some amazing people there and everyone's situation is different. I'm privileged to have been in a position to take a firm line on my morals, but I'm hopeful that continued organizing will cause change.

“Doing business with ICE is not okay,” she wrote, acknowledging that certain privileges allowed her to take that stance.

Beyond employees, people also dropped out from speaking at the GitHub event.

Lily Dart, a British product researcher, was scheduled to speak at a GitHub event in London next week but announced on Tuesday that she was pulling out.

“Given their position with ICE I don’t feel comfortable promoting them,” she wrote.

Super sad to say this, because I have always been a big fan of @github.

I was supposed to speak their Universe Roadshow in London next week.

Given their position with ICE I don't feel comfortable promoting them, so I have just dropped out.

Ada Rose Cannon, a developer advocate at Samsung, also announced she would be withdrawing from the GitHub Universe conference.

I have withdrawn from speaking at GitHub universe because of they provide support for ICE. I will not be speaking there nor will I be attending.

Sorry to those who were hoping to meet me there i hope we can meet on another occasion.

“I felt supported because my team puts ethics as top priority in everything we do,” she wrote, adding that they even offered GitHub the opportunity to hold a discussion on the intersection of ethics and developers, but the organizers “decided withdrawing from the event would be the best option.”

On Wednesday, many GitHub employees organized to protest before Friedman’s speech with a makeshift cage outside the event to demonstrate the cruelty of ICE:

It’s not clear to what extent GitHub’s employees’ grievances were addressed at the event. The Daily Dot has reached out to the company.