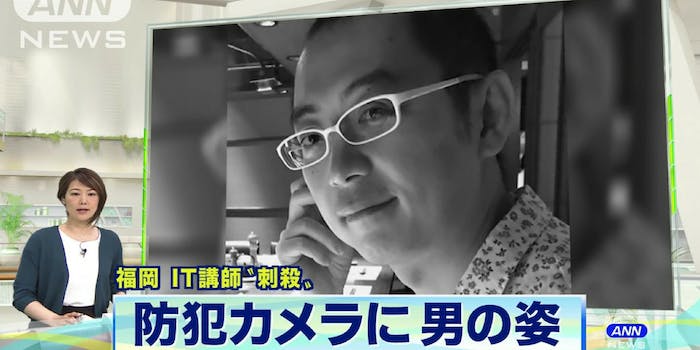 Police have arrested a man claiming to be the blogger's internet troll.

Just moments after he gave a talk on online harassment and internet trolls, a popular Japanese blogger and dark web expert was killed by a man who authorities say harassed him online.

Kenichiro Okamoto, 41, was attacked with a knife in a men’s restroom 15 minutes after his seminar on June 23 in Fukuoka, Japan, according to the Washington Post. The attacker fled the scene on bike, Japanese newspaper Asahi Shimbun reports, and Okamoto was taken to a hospital and pronounced dead.

Okamoto’s two-hour seminar covered two topics: how to become a professional blogger and get more page views for your website, and how to deal with “blog trouble,” such as when readers fight, question the blog’s content, or send “love letters.” The event hosted 30 people.

Okamoto, who worked for Tokyo-based consulting company Sprout, anonymously operated a blog under the username “Hagex.” He wrote more than 26,000 posts and had more than 1,000 followers. Asahi Shimbun reports that Okamoto’s death exposed his identity as the man behind the blog, though Okamoto was well-known in the internet security industry as a writer with a focus on cyberattacks and hackers.

Okamoto had published multiple blog posts about an internet troll of his, whom he called “Teino Sensei” or “Mr. Half-wit” (or “Mr. Low I.Q.,” per the New York Times). He had accused the troll of “repeatedly posting slanderous remarks on the internet” about him.

“It’s not a problem for people who are used to abusive language, like me, but a great many people would feel frightened when they receive invectives out of the blue,” Okamoto had blogged in May about threats he received.

On June 24, Hidemitsu Matsumoto, 42, turned himself in to police for Okamoto’s death. Police say the two men had never met in person before but that Matsumoto told police he “held a grudge against him over internet [exchanges] … I thought I would kill him.”

Matsumoto is suspected to have published a blog post about Okamoto after the killing, claiming to be Mr. Half-wit and writing, “I am going to go now to my neighborhood police box to voluntarily surrender and take responsibility for my actions.” Police announced on June 25 they had arrested Matsumoto and are investigating whether he wrote the post himself.