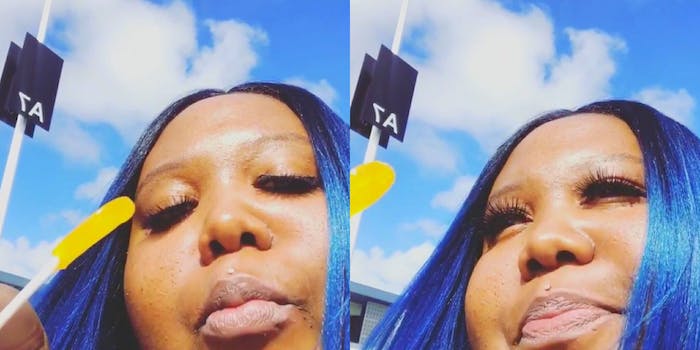 Amber Wagner, who you might know as jstlbby, wants you to ask yourself why you’re not having a good day.

“Is this shit that bad that you can’t have you a good day, bitch?” the 27-year-old Instagram personality asks in one of her many motivational Instagram videos. She goes on to point out that her lashes are falling off, her wig is blowing like a “mothafucka,” but she doesn’t have anyone pressing her—she’s stress-free AF, and she wants you to figure out why you aren’t, too.

This viral video, featuring Wagner’s blue wig and a yellow lollipop in hand, is one of hundreds showcasing her radical principles of self-love. She’s become a kind of unconventional preacher to more than 1.6 million Instagram followers (unless your preacher regularly asks you if the “shit” is that bad, too). Her videos somehow exude both levity and gravity, gassing up her followers to lead #WorryFreeWednesdays while urging them to also value themselves. In an online community dominated by astrology and mental health memes, Wagner’s videos finally put a face to the self-help and self-care practices that the platform passes around.

In the three years since she started her first Instagram account, Wagner and her pieces of inspiration have gone on to grace magazine covers, mixtapes, and live performances. People have an easy time relating to her. In her own words, it’s probably “cause when I give a message, I’m speaking off of personal experience,” she told Fader. “I put it in a way where everybody can relate to me, but giving real-life problems and giving solutions to them.”

13 facts about Amber Wagner, aka jstlbby

IT KOST NOTHIN TO SMILE BITCH

Wagner was raised in a “devoutly Christian family,” according to Fader, in Inglewood, California. However, she told Oprah Magazine that she initially stopped going to church after the death of her father in 2009. Now, based in Carson, California, about 16 miles south of Los Angeles, she inspires her followers with her words of praise and empowerment. As a teen, she was the class clown—“loud, outspoken, a trendsetter, just a big ball of fun,” as she puts it, according to feminist newsletter Salty.

According to Oprah Magazine, Wagner’s Carson home, which she shares with her mother and grandfather, is adorned with hand-drawn art from fans. She posted a video of her celebrating her birthday on Aug. 10, 2018.

Previous accounts ran under the name jstlivinbby, with a reference to the 2 Chainz song, “Living.” Wagner started her first account in 2015, where she said she shared “ratchet posts” that she characterized as “negative.” Instagram users reported her first two accounts often, she told Oprah Magazine, to the point where they were taken down.

Her third account, however, is where Wagner hit her stride. Her account namesake and 2 Chainz reference to remains and she credits Instagram personality @iamperez with helping her learn how to make a living off of sponsored posts alone.

“In the chorus, he says, ‘I’m just livin’ baby,’ and I just love that, ‘cause that’s really what I’m doing. Like, I’m just livin’ out here,” Wagner told Fader.

She said she started posting to Instagram after being in a “dark place,” according to a video she did with BuzzFeed. Her mother then encouraged her to go back to church, she told Oprah, and Wagner says that’s when her life began changing. Wagner told Fader she started recording her videos for her religion, to show other people “how good God is.”

“I was dead broke at age 24 and had no ambition of getting a job,” Wagner told Salty. “I had just lost my high school boyfriend. It was horrible!”

4) She has an entire “Break Up to Glow Up” guide, courtesy of Salty

The first step is to realize that the relationship is finally over, and the final step is to go eat!

“Lol I don’t care if you’re vegan, vegetarian, or just a regular eat-everything-in-sight person like ME! Lol a good meal to celebrate a new chapter, a new beginning is always needed!” Wagner told the publication.

Already, that’s some solid advice to live by.

She told Oprah that she doesn’t eat breakfast, but she will read the app in the morning, and relies on the app or a 365-day prayer book for “content strategy.”

Wagner has several video compilations of her clips posted to YouTube, along with a robust Twitter presence. She also told Salty that she’s working on a podcast.

In between depressing news and mind-numbing memes, Wagner’s tweets are just the amount of inspiration that the oft-toxic social network needs.

Wagner’s hand is emblematic of the way she speaks, motioning and emoting for her entire being. Her vibrant acrylic claws sift nuances through the air.

Wagner told Salty that she can spend up to $400 a month on her nails if she “wanna be fancy.” According to Oprah, Wagner’s go-to place is an “unassuming” storefront in a plaza “across from an old donut shop” about 20 minutes from her home.

8) Her sunglasses have become a required accessory

One of her most prominent videos—the one asking her audience to analyze how bad of a day they’re having—features Wagner with a yellow lollipop.

9) A ton of celebrities follow Wagner and preach her inspirations

Some prominent jstlbby fans include Rihanna, Cardi B, SZA, and Kelela, among others. Wagner has even partied with Tiffany Haddish at the Emmy’s, according to Oprah.

Wagner told BuzzFeed that her mother, who she considers to be her greatest inspiration, shrugged off her social media gig—until she saw just how prolific her daughter’s videos were with the world. Now, Wagner’s mother sports her daughter’s face on T-shirts, proudly.

“So ever since I heard Beyoncé sing, ‘I been drinkin’ watermelon,’” Wagner winds up before lifting a watermelon flavored Arizona tea into the frame, “Bitch, me too, the fuck!”

Following the video’s creation, the clip of Wagner saying “Bitch, me too, the fuck!” became a popular internet reaction, akin to tweeting “same” with 10 times the entertainment value. Iconic.

11) Her monologues have been featured in several musicians’ live sets

In August 2018, Wagner appeared on her first magazine cover for Salty, a feminist newsletter. However, Wagner found herself on the righteous end of a body positive controversy after Instagram took down the image. Later, after Wagner’s protest, the image was restored, with Instagram stating that the cover was “removed in error.” Wagner told Yahoo that she might have had her controversial cover censored “because [she’s] bigger.”

“Everybody else doing it—all the celebrities, Kim Kardashian. Why can’t I do it—see what I’m saying? And mine wasn’t even that provocative,” Wagner told Yahoo.

While Wagner has been characterized as “body positive,” she’s stated that she’s just trying to get others to embrace and love themselves.

“People always think I’m just trying to be supportive of big people, but I tell them it’s not just about big people—it’s about big, small, any size,” Wagner told Yahoo. “Embrace yourself, you know what I mean? It makes you unique.”

She said the whole experience, however, has compelled her to post more pics that intentionally show off her body.

“The Salty cover actually took me out of my element, because I never show my arms, you know? That was the first time I showed my arms and full body,” Wagner told Oprah. “And it made me feel good to be free.”

13) Ultimately, she hopes to inspire others to keep their faith

She wants people to start loving themselves more, she told Yahoo, and wants to be an example of that for others.

“No more negativity. This world is already corrupt with fuckin’ [Donald] Trump and all that,” she told Fader. “We just need to keep it positive, you know?”