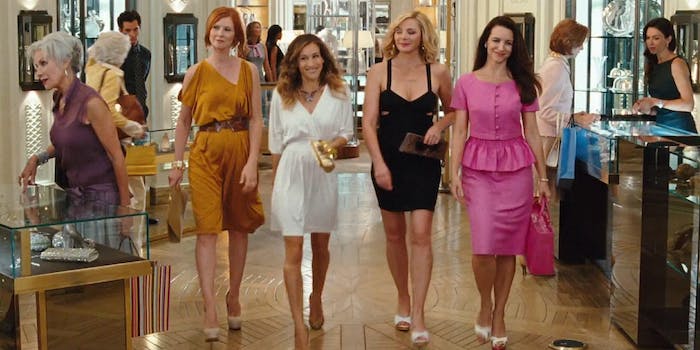 Come for the bad outfits, stay for the Woke Charlotte memes.

The Instagram account @everyoutfitonsatc documents, as the name suggests, the outfits worn by Sex and the City characters. Each post shows a photo from a scene on the TV show, or the two films that followed, along with an often wonderfully scathing caption. It’s part fashion critique, part commentary on the SATC universe. Writer/director Lauren Garroni and Female Trouble designer Chelsea Fairless launched the account in 2016, and it rapidly gained popularity. Currently, Every Outfit on Sex and the City has nearly 400K followers, including Kristin Davis (Charlotte York Goldenblatt), Sarah Jessica Parker (Carrie Bradshaw), and SATC costume designer Patricia Field. An illustration of Miranda Hobbes, played by Cynthia Nixon in the series, is the Instagram account’s avatar. (Although Carrie is the star of SATC, a cynical, no-nonsense lawyer is a more relevant character for women in 2017.)

SATC, which began airing in the late ’90s, is an easy target for memes and internet jokes. The characters and dialogue on the show are often parodied—especially Carrie’s overused line, “I couldn’t help but wonder.” But by focusing specifically on the character’s wardrobe choices, Every Outfit feels smart and fresh.

The captions on the Instagram posts are often filled with pop culture references, like this one that calls Samantha Jones’ outfit “one part Fraggle Rock.”

Here’s another great post: “Robert is basically the human equivalent of a sage stick.”

Every Outfit seems to highlight details that even longtime fans never noticed. Exhibit A: This dreadful lamp.

Everything about this look is perfect and quintessentially late '90s. But we're too distracted by that atrocious floor lamp to really consider the clothes. Carrie may buy her shoes at Barneys, but when it comes to lighting, the Pier One clearance section will do just fine (S2/EP18) #CarrieBradshaw #InteriorDesign #PierOneImports

And the account constantly defends Miranda, who deserved a nicer wardrobe in early seasons.

☔️ACK ☔️ Most of Miranda’s early series outfits have her dressed like an IRL Cathy comic. It’s cruel. She’s a woke, independent female, who has to fuck Steve. There’s no need to further punish her by making her wear the best of the 1998 Talbots holiday catalogue. (S2/EP5) #MirandaHobbes #PrayForMiranda #TalbotsCatalogue #CathyComic

Every Outfit also isn’t afraid to get political. Before the presidential election of 2016, the account posted about a scene in Season 3 of the TV show in which we find out that Carrie isn’t registered to vote. “For the love of god, everyone please get your shit together and vote tomorrow,” the caption reads. “Don’t be like Carrie.”

For the love of god, everyone please get your shit together and vote tomorrow. Don’t be like Carrie. But DO be like Samantha, who is enchanting us with this leopard mafia wife look (S3/EP2) #FuckingCarrie #ImWithHerOutfit #LeopardMoment

The captions on Every Outfit are some of the best writing on the internet. Following it is like rewatching SATC episodes with a really witty, sardonic friend.

“Like Simon Cowell, we vocalize things that people are already thinking,” said Fairless in an e-mail to the Daily Dot. “Everyone that watched the first Sex and the City film thought that the Louis Vuitton bag that Carrie gave her assistant Louise was ugly, but there was no one to affirm that. So we’ve taken on that role for fans of the show.”

In case you forgot what that bag looked like, here it is, along with the caption roasting Carrie’s gift:

What the fuck is this bag Carrie? I work my ass off for you and you don't even think to buy me something classic from Louis Vuitton, like a motherfucking Speedy? This shit doesn't match anything I own! And just because Richard Prince designed it doesn't make it cute. If you're going to subject me to one of these overhyped artist collabs at least hook a bitch up with some goddam Stephen Sprouse. Or some motherfucking Murakami. Those cherries were cute as fuck! I can't with this bullshit. #LouiseUncensored #LouisVuitton #RichardPrince #SATCmovie #FuckingCarrie

“On the surface…is a quest to document every outfit on Sex and the City, but we’ve obviously gotten a bit away from that,” said Garroni. “I think at the moment we’re using the show as a prism to dissect the fashion and culture of today.”

Recently, the Instagram account created a “woke” version of Charlotte’s character and turned her into a meme. Woke Charlotte interjects problematic scenes (there are many on SATC) to enlighten the other characters on class, feminism, systemic racism, and white supremacy, among other issues.

Here she is explaining to Carrie why she shouldn’t use the term “ghetto gold.”

Introducing #WokeCharlotte, the fictitious voice of reason that Sex and the City desperately needed but never actually had. Today, she schools Carrie on why referring to her jewelry as “ghetto gold” isn’t cool. (S4/EP16) #CharlotteYork #WokeCharlotte

And here she is explaining bisexuality to a sex writer.

Bunny definitely would have voted for Trump.

On this deeply problematic holiday, #WokeCharlotte is here to remind us that racism is never ok and failing to address it directly is what allows it to continue. Plus, you know that Bunny voted for Trump. (S4/EP12) #CharlotteWokenblatt #BunnyMacDougal #ThanksgivingMuse #MandarinBaby #PearlMoment

#WokeCharlotte is here to remind us that communicating with your partner about your boundaries is an essential component of a healthy sex life. (S3/EP6) #CharlotteWokenblatt #SexPositive #KinkPositive #Misogyny #Boundaries

Woke Charlotte is a way to address the “problematic dialogue” in the series, said Fairless, which “has become more pronounced as the years go by, as marginalized people have been able to make their voices heard in mainstream culture.”

“I thought that it would be so much more impactful if Charlotte was the one calling people out,” she continued. “We wanted to recast one of the characters in the show as a social justice warrior, and Charlotte just seemed like the most hilarious option. And we’re so thrilled that people love her as much as we do.”

“I think it’s a mixture of content and form,” she said. “Subtitles, real or imagined, are a micro trend on Instagram right now. Additionally, people still love the show, but there are some really cringe moments watching it now. I think using the subtitle format to correct some of the more un-woke moments was something our followers, and ourselves, never knew [we] needed.”