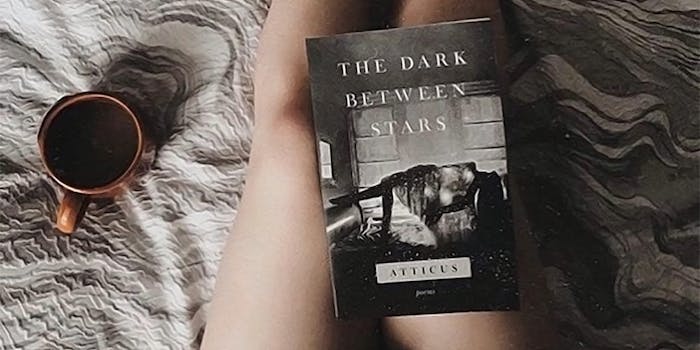 Amid questions about ethics and plagiarism, a rival Instapoet makes a startling accusation.

Atticus, the popular Instagram poet who wears a mask and obscures his identity, has been on a book tour for latest poetry collection The Dark Between Stars. At New York City bookstore the Strand, he offered to take off his mask, only to reveal another mask underneath. In Houston, where he pulled the same trick, he told an audience member who asked if he’ll ever take off the mask: “The more notoriety, the more I want to keep the mask.”

Asked if he wears the Guy Fawkes mask when he’s not Atticus, he replied: “When you take off the mask, it’s its own mask. Because no one knows who you are.”

As detailed in a piece about Atticus earlier this month, the poet has a devoted (and largely female) fanbase, book deals, branded merch, and celebrity fans. The actress Lucy Hale recently got a tattoo of one of Atticus’ most popular poems, “Love her but leave her wild,” adding to a list of women who’ve done the same and documented it online. Atticus is an “Instapoet,” the name applied to a subculture of Instagram-first poets (who often also publish books) and has close to 1 million followers on the platform. Much of his work is pithy but inspirational, vaguely familiar but reproduced in a new font. Atticus’ real identity is apparently known to some in the poetry community, and critics long claimed he appropriates older quotes and poetry and passes them off as his own.

Poet Collin Yost, who faced backlash for his own work last year, posted about Atticus’ identity on Instagram earlier this week, and reached out to the Daily Dot with several instances where Atticus’ poems appear to plagiarize or reappropriate older quotes and poems. In some cases, the authenticity of the initial quote—as with F. Scott Fitzgerald’s “She was beautiful, but not like the girls in those magazines” passage—is difficult to discern. Others, like the Proust quote from The Captive & the Fugitive and Bruce Lee’s documented speech that ends with a line about “the art of dying” are a little more clear-cut.

Yost also says Atticus hasn’t be outed publicly yet because he is “untouchable in the community.” Yost says that Atticus is a reality TV star, so that may have something to do with why.

If you Google Duncan Penn, it autofills to “Duncan Penn Atticus” as well as “Duncan Penn is Atticus?” Penn is one of the four hosts of MTV’s feel-good reality show The Buried Life, which aired from 2010-2011 and helped people live out their bucket lists, like attending a party at the Playboy Mansion. The show’s website states that the project started in a “garage in Victoria, B.C.” Atticus has claimed in interviews that he’s from British Columbia; his current tour ends in Vancouver.

In late August, The Buried Life’s Twitter account announced it was working with Atticus to help raise money for the nonprofit To Write Love On Her Arms, which assists those battling addiction and depression. The same kind of marketable, live-out-loud vibe fostered on The Buried Life is apparent in Atticus’ aesthetic.

Poet Thom Young, whose recent novel Instapoet satirizes the subculture’s oft-mediocre musings, says “plagiarism is pretty rampant on Instagram.” But more troubling is how Atticus has used women’s experiences to sell his brand to young women. He, and other male Instapoets, have been meta-labeled within the community as “she” poets, for their framing of poems around women’s emotions and trauma. Poet Scott Laudati calls Atticus “the subprime mortgage of literature,” and says: “I don’t think teenagers should be held accountable for falling for a con artist, but the publishing industry should. Bookstores who carry his book should. Emma Roberts, who runs these ‘contests’ with him, should.”

In one recent review of Atticus’ current book tour, from America magazine, writer Emma Winters said she was “expecting a room full of eighth-grade girls who wanted to feel #deep, but I was surrounded by a diverse group of adults and older teens.” She also captured a curious trend:

A woman in the back of the room asked: “Where do you draw your inspiration?”

“That is a great question,” Atticus said. “Are you a writer?”

She said yes, and Atticus asked what she wrote. The woman said that lately, she had “an inspired burst of poems come” to her. “Cool,” Atticus replied. “You should DM me,” meaning send him a direct message on social media. He had this interaction with six other fans throughout the night.

Earlier this week, Penn’s Instagram went from public to private, but, as noted in Yost’s post, there are several similarities between Atticus’ Instagram and Penn’s, like the Triumph motorcycle he flaunts. Penn’s celebrity would also explain the ease with which Emma Roberts and Karlie Kloss have promoted Atticus. According to IMDb, Penn was an executive producer on the series Movie Night with Karlie Kloss.

Atticus still has his defenders, and there is always some possibility this is all leading to a reveal of “It was just a social experiment,” a favorite refrain of content producers looking to downplay elements of their “pranks.” Perhaps he’s trying to say something about the nature of celebrity. But a celebrity using their fame to leverage anonymity while also profiting off it is a calculation, not an experiment.