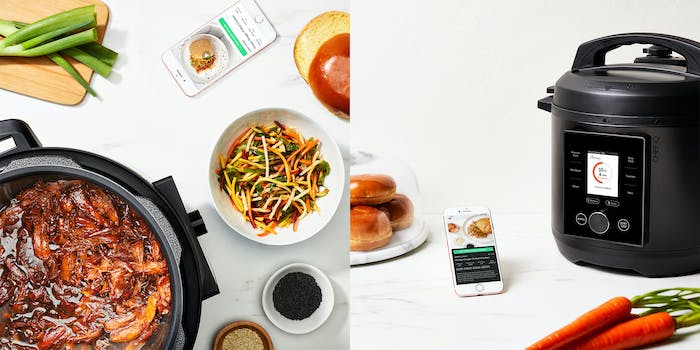 CHEF iQ is the pinnacle of pressure cooking technology

Puts the Instant Pot to shame.

Far too many new products like to throw in a companion app or slew of unnecessary “smart” features. I don’t mean to go full boomer here, but many of these so-called smart devices are, actually, kind of dumb. Not every appliance needs an app, let alone the need to connect to Wi-Fi to even operate. There are, perhaps, two or three exceptions. One of them is the CHEF iQ pressure cooker.

If you’ve used a stand-alone pressure cooker before, the CHE FiQ doesn’t look too far flung from these ubiquitous countertop marvels. Here are some of the specifications and features of this smart pressure cooker.

What sets this device apart from the brand of pressure cookers you’re probably comparing it to in your head right now is two fold. There are the features you can see, and the features that aren’t immediately obvious until you take it for a spin.

CHEF iQ pressure cooker review: Is it worth it?

As I’ve said before, smart devices are a dicey prospect, and in more cases than not, bring nothing but annoyance or outright heartbreak. And you’re just trying to get dinner on the table. However, my two weeks playing with this pressure cooker rendered nothing but positive results and pleasant surprises. Here are some of my favorite features.

Unpacking your CHEF iQ pressure cooker and plugging it in reminded me of booting up my Nintendo Switch for the first time. Using your phone, you set up a profile, connect your device to the Wi-Fi, and update your device firmware. The app comes with more than 300 recipes that not only provide a detailed ingredient list, but guided video directions.

However, you don’t actually need to use the app if you don’t want to. I like scrolling through it for ideas and occasionally peeking at recipes to inspire something I can riff on. You know, dinnertime jazz. The CHEF iQ app is fantastic, but perhaps more importantly, it’s totally optional.

Like any pressure cooker, the CHEF iQ has a bunch of built-in presets in the machine. Lesser devices have a catch all button for things like “rice” or “eggs.” The CHEF iQ expands these categories to super specific lengths.

Yes, there’s a preset button for eggs. But you can choose between soft, medium, or hard cooked yolks. Not only is there a preset for rice, but a handful of other popular grains like quinoa and oatmeal. But as anyone knows, rice alone is a wide-world of variables. The CHEF iQ carries presets for every style of rice categories including short-grain brown rice, wild, and even sushi.

Better yet, the built-in scale offers untold amounts of precision when cooking these varied grains, and just about every other preset recipe. When adding water to the pot, a weight scale counted down on the LCD screen.

I overshot it at first, but once I took a little water out, I got the perfect amount of liquid for the amount of rice I was cooking. I don’t have to tell you that the rice came out perfectly. I’m talking, Zojirushi perfect. Unlike a stand-alone rice maker, this baby makes way more than just rice.

And this is just scratching the surface. There are presets for meat, poultry, and all manner of vegetables, ensuring that everything you cook in the CHEF iQ won’t just come out great, but precisely great.

The pressure cooker is large enough to cook a whole chicken, and makes six quarts of stock in less time than it takes to watch a couple episodes of Seinfeld. The black matte finish is gorgeous enough that you won’t want to hide it in a cabinet when it’s not in use.

The LCD screen interface is a joy to use. Not every appliance should have an app, but every appliance should have an LCD screen. When I first used it, I spent about ten minutes just scrolling through the device presets. Not only were the presets listed, but some brightly colored examples of the presets were also provided. Totally unnecessary, but it’s the little things that make the CHEFiQ far more of a looker than the competition.

Things I made in the CHEF iQ pressure cooker

Most pressure cookers will render adequate results. Many of them fail when you make them cook stuff that requires a little more precision. And as stated above, precision is sort of the CHEF iQ’s wheelhouse. Here are three things I made that I believe showcase the versatility of the pressure cooker.

The CHEF iQ is a good example of what a “smart appliance” should be. It does everything a run of the mill pressure cooker does, but it does it better. It provides precision cooking that in some cases has a sous vide-like quality. Its companion app is perfect for folks who struggle with the eternal question “What the heck am I going to make for dinner?”

Handy as the app is, you can go totally analog with it and still enjoy its space-age additions like the built-in scale and gorgeous LCD screen. Whether you’re looking to buy your first pressure cooker or simply treat yourself to an upgrade, the CHEF iQ is not only the best looking model on the market, it’s also the most effective. The CHEF iQ pressure cooker is available on Amazon for $179 (regularly $199).