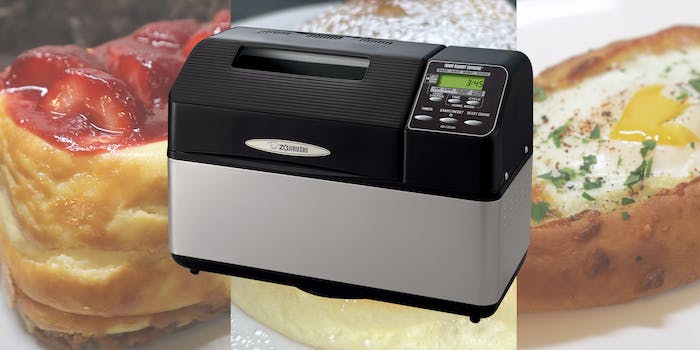 Everything from pizza to cheesecake is a click away.

Is there anything better than bread? Of course, I’m using that term extremely loosely. When I say bread, that includes everything from sourdough boules to jerk chicken pizza. Is there a machine that can spit out these treats? The answer may not be universal with every machine on the market. But, the Zojirushi Home Bakery Supreme is a carb-filled dream.

If it’s a dough and it’s risen by yeast, in my humblest opinion, it falls under the bread category. I eat (and, more importantly, cook) so much that I’ve always considered whether getting a dedicated bread machine would be a prudent investment. This Zojirushi Home Bakery Supreme review will take a deep dive into the machine’s features.

Because it’s a closed, tidy environment, it takes care of every single step of the bread making process. All you have to do is load it up with ingredients, click what bread style you want, and then wait. Bread, like many other great things, takes time. A few hours later, your bread will be ready to slice and eat.

The Zojirushi Home Bakery Supreme looks like many two pound bread machines on the market. It’s a beast of a machine and takes up a fair amount of counter space.

I expected the machine to be heavy, and almost fell backwards as I went to pick it up. It’s lightness is deceptive, which I’m not at all mad at, save for the fact that it almost accounted for falling on my ass. Even if I did almost take a weird John Cleese-esque spill, it would have been on me.

It also came with a charming little cookbook which offered tons of recipes for bread, cake, and even jam.

Zojirushi Home Bakery Supreme Review: Is it worth it?

There are many appliances that can produce pretty solid bread dough. Or, if you’re a luddite, you can go really old school and do the whole thing by hand. Still, even under the best circumstances, you’re still doing more work than you want to do, and still left with a pile of dishes.

I was positive that the Zojirushi Home Bakery Supreme would be good at making bread. In fact, the first thing I made with it was a two pound loaf of white bread. And would you believe it, it was a perfectly serviceable loaf. Great even! And while it was soft and perfect for eating with some jam and butter or pressed into a panini, I wasn’t going to waste time photographing a loaf of white bread. That would simply be a little too (pun heavily intended) whitebread for what I’m going for. Yes, this is an excellent bread maker. But is that all it does? Luckily, no. So yes, I did make a standard bread loaf with the machine, but here’s a small selection of what you can do with the Zojirushi Home Bakery Supreme that isn’t standard. Here’s what I made using my machine during a week-long adventure.

In most cases, I was able to clean out the removable pan with a quick wipe with a kitchen towel. It’s one of the most non-stick surfaces I’ve ever encountered. On rare occasions with stickier doughs, I went in with a sponge and didn’t have to wrangle too hard with any messes. However, if you’re more inclined, the pan and the paddles are 100 percent dishwasher safe.

Buying a machine that does one thing is quite silly, given the fact that everyone has limited counter and cabinet space. But luckily, the Zojirushi Home Bakery Supreme doesn’t simply make bread. Utilizing the many functions of the machine can render plenty of tasty stuff that’s not even tertiarily related to bread.

Pita, boules, calzones, bao, and other yeast-raised doughs are a mainstay in my kitchen. I make so much bread every week that it’s become a chore. Well, it used to be anyway. Now, I pop the removable bread pan out of the machine, plop it on top of a scale, weigh out ingredients and let the machine do the rest. No fuss, no muss, no messy countertops, or extra dishes to clean. The possibilities are truly endless, and bread is only the beginning of what this machine can make.

There are three caveats I would like to point out if you’re considering getting it, however.

The Zojirushi Home Bakery Supreme bread maker is available on Amazon for $269.99.