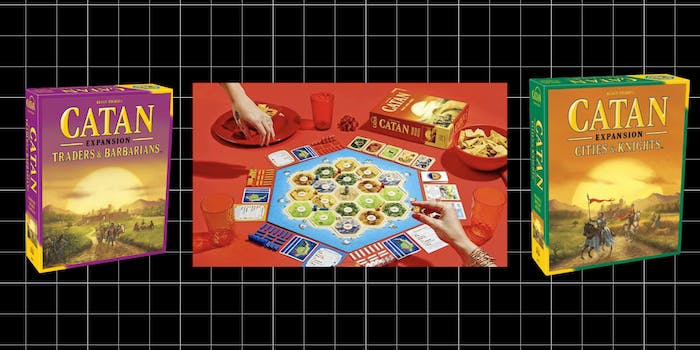 It’s settled: These are the 10 best Settlers of Catan expansion packs

If you've exhausted the base game, it's time for an expansion pack.

Settlers of Catan is one of the most prolific games for board game fans. It’s easy to learn and downright addictive to play. Players focus on growing their own resources, establishing trade, and fighting off invasion—the game has virtually endless variations on how you can grow your city.

But the game is so enjoyable, that you may want to add more facets to the world of Catan. There are several Settlers of Catan expansion packs—and expansions on those expansions! Here’s a handy guide to choosing the best Catan expansion for your next game night.

Base game versions of Catan

Before you know which expansion pack to buy, it’s important to know which base game you’re building off of. There are a few versions of the Settlers of Catan base game.

Select the base game you have (or want) below, and we’ll send you to the compatible expansion packs.

7 Settlers of Catan expansion packs for the original game

1) The Original Settlers of Catan with Expansion Pack

Of course, the classic Catan is the most popular, so most of your expansion packs will be fit for this game. The base game is equipped for 3-4 players, and it’s fairly easy to play. Competitively manage your resources in order to gain more resources. Have a fun time with some of your game night friends and subtly learn how having resources is the only way to get more resources. Take that, Kim Kardashian!

Already have the base game but want to play Catan with a larger group of frienemies? The 5-6 player Catan expansion pack is also available on its own. These expansions are always handy to have on reserve for when you’ve got company and you’re feeling a little friendly collaboration (or competition.)

Traders & Barbarians focuses on Catan’s growth after its starting cities and settlements are built. This quintessential Catan expansion comes with 5 new scenarios exploring Catan’s fishing market, rivers, caravans, an attack by Barbarians, and the re-establishing of trade. If you’re looking for your first Catan expansion pack, this is a great place to start. And if you’re looking for a larger game night, you can snag the 5-6 player expansion.

Catan is all well and good, but if you’ve got a hankering for the salty-sweet air of the sea, expand out into the waters! Build ships, create new sea lines for trade, and explore the islands surrounding Catan. This expansion has nine new scenarios and its own scenario called Legend of the Sea Robbers. It also has an available 5-6 player expansion for bigger crowds.

As Catan begins to thrive, barbarians attempt to steal resources from your beloved city. Cities & Knights brings the Knights of Catan to your board! You and your fellow players must ally yourselves and fight off the upcoming invasion.

Knights is considered one of the essential expansion packs. You can combine the expansion with Seafarers and Traders & Barbarians, making for an incredibly expansive gameplay experience. Catan even has expansions for its expansions! You can also upgrade your game for 5-6 players.

Explorers & Pirates is a Catan expansion with 5 new sea-based scenarios on deck. Your goal is to build new outposts on islands you discover. Build settlements and flourish—but watch out for pirates. Put on your sea-shanty playlist and climb aboard your ship. Plus, this game also includes its own game mechanisms, so it can be a great way to mix up your regular Catan game.

This Crop Trust Scenario expansion for Catan is fun and educational! The scenario prioritizes seed diversity in a growing agricultural community. As you and other players work together to make sure Catan has food enough for the present and the future, you’ll gain an appreciation for real-world logistical issues. Plus, profits from the sale of this scenario go to Crop Trust, a non-profit that helps address food shortages in poor and marginalized communities.

Expansions on expansions: 3 Settlers of Catan expansion packs for the player who has everything

Settlers of Catan expansion packs are so well-loved that there are expansions on the expansions. Woah. Don’t think about it too much, you’ll go all “Inception.” Just kidding.

They all require a base game, plus whichever expansions required to tell the story. They’re ideal for seasoned Catan players who like to play around with the game’s mechanics—or just have a very large board game table you’re looking to fill.

1) Cities and Knights expansion pack: Legend of the Conquerers Scenario

If you enjoyed the battleground elements of your Cities & Knights expansion, guess what? That expansion has an expansion, too. Almost 600 years after the first settlers reach Catan, knights from every region will band together to defend Catan from a major invasion from the North. This expansion includes 3 new scenarios that rely on cooperation and battle strategy. Take up arms in defense of Catan!

If Seafarers is your favorite Catan expansion pack, get ready for 4 new scenarios revolving around a shipwreck. Set out under the directive of the Council of Catan by solving the mystery of the ship’s origin. What does this ship’s arrival mean for Catan and its surrounding seas? This expansion is the ultimate pack if you want to know everything there is to know about the seas surrounding Catan.

So you’ve got your ocean exploration gig going with the Seafarers expansion, and you’ve saved Catan from invasion with Cities & Knights. Now what? I’m so glad you asked. Adventures comes with six new scenarios to give you the most in-depth variation on Catan yet. The game comes with several new game components and mechanics—if you’ve been looking to express some gameplay creativity because you’ve played it all, this is the box for you.

Are there any expansion packs for Catan Starfarers?

There are only a few different variations on the Settlers of Catan base game. One of the most beloved by game-players is Catan: Starfarers.

Wanna do Catan but in space? Travel to the 3rd millennium, where you’ll guide your spaceships across the galaxy in search of resources. Establish trading relationships with alien life, and build transport ships and spaceports. And of course, it’s Catan, so watch out for pirates!

This incredibly expansive game has its own 5-6 player expansion pack, but it doesn’t have any themed expansions or scenarios – yet. We promise to update this article in the event that one is created.

Are there any expansion packs for Rivals for Catan?

Rivals for Catan is the 2-player card game version of Catan. It’s pleasantly portable and a great game for couples or roommates who don’t always have the headcount for a traditional game. You’re next in line for the crown of Catan. It’s your responsibility to build roads, cities, ships, and buildings while you attempt to thwart your opponent wherever possible. Establish trade, harvest resources, and use your cards to interact with Catan in a one-on-one setting.

If you really want to intensify your Rivalry, why not introduce religion? Age of Darkness finds players in a Catan in the midst of spiritual turmoil. This 90-card expansion adds 3 new scenarios to expand your game’s trade capabilities and defense from invaders. All under the shadow of the religious tension within. Can you unite all of Catan under one ideology?

Onward into the future! This expansion urges you to nurture the arts of culture of Catan. You’ll take to the seas to expand your knowledge of the world around Catan, and encourage the idealogical growth of your people. This 125-card expansion will still bring out the head-to-head competition that Rivals is most loved for. But at least the two players will be nurturing fictional artists, philosophers, and explorers!