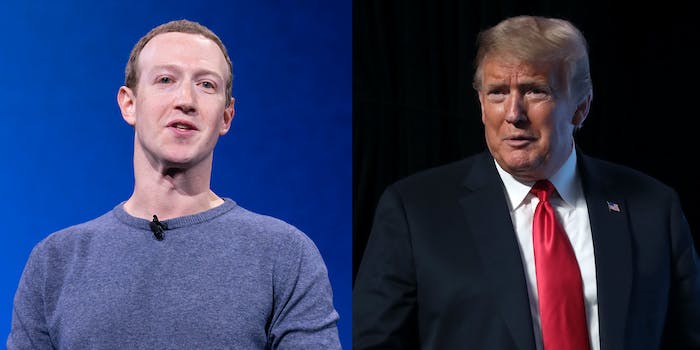 Zuckerberg says he doesn’t have a secret deal with Trump

He called the idea 'pretty ridiculous' in an interview published Monday.

Facebook CEO Mark Zuckerberg called speculation that he and President Donald Trump have some sort of secret arrangement that allows for the president to post incendiary things on the platform “pretty ridiculous” in a new interview.

The social media giant has been criticized for its more lax approach to moderating posts from the president compared to other platforms like Twitter.

A New York Times column last month had sources who speculated Zuckerberg and Trump have some kind of deal that allows Trump more leeway on the platform in exchange for the administration not setting its sights on the company in the form of regulation.

Trump and Zuckerberg were among a group of people who had dinner at the White House last year, and Zuckerberg’s vagueness about what occurred during it only added fuel to the speculation.

In an interview with Axios published on Monday, Zuckerberg shot down claims about some sort of secret understanding between him and the president.

“I’ve heard this speculation, too, so let me be clear: There’s no deal of any kind,” Zuckerberg told the news outlet. “Actually, the whole idea of a deal is pretty ridiculous.”

“I do speak with the president from time to time, just like I spoke with our last president and political leaders around the world.”

Zuckerberrg addressed the dinner in a Q&A with employees last week, according to Axios, where he said the dinner “does not suggest we have some kind of deal.”

While Zuckerberg denied having some kind of understanding with the president, it likely won’t do much to quell the criticism his company is facing for its decisions surrounding some of Trump’s posts.

While Twitter has removed and fact-checked several posts made by the president, Facebook has left similar posts up without any context. Zuckerberg even criticized Twitter’s decision to fact-check the president.

This inaction has led to employees holding a virtual walkout and an advertising boycott against Facebook by several companies.

Amid all of this, Zuckerberg announced last month that “harmful” posts from public figures would soon include a warning label.

You can read more about Zuckerberg’s interview with Axios here.