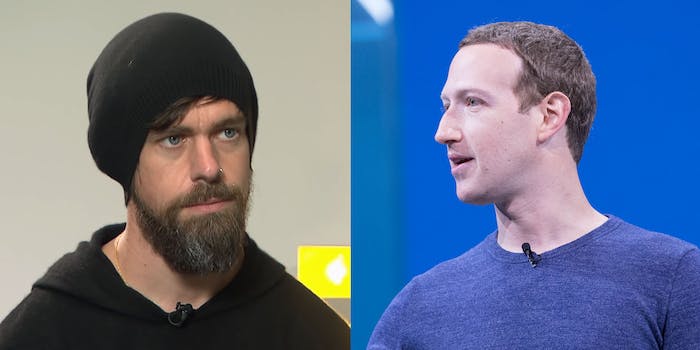 Trump’s tweets made unsubstantiated claims about mail-in ballots, prompting a first-ever fact-checking label for one of the president’s tweets. The labels directed users to a page on Twitter fact-checking the remarks.

On Wednesday, Zuckerberg told Fox News that he did not believe that private companies like Facebook should be the “arbiter of truth,” in a dig at Twitter’s decision.

“We have a different policy, I think, than Twitter on this,” Zuckerberg said in a preview of the interview. “I believe strongly that Facebook shouldn’t be the arbiter of truth of everything that people say online. I think in general private companies shouldn’t be—especially these platform companies—shouldn’t be in the position of doing that.”

The president’s fact-checked tweets were also posted on Facebook, which did not take any action against them. Facebook has taken a more lax approach to what politicians say on its platform and has been criticized for its political advertising policy.

Despite his comments in last night’s interview, the social media giant did put a “partly false information” label on a viral ad that criticized Trump for his response to the coronavirus pandemic. The ad was fact-checked by a third-party fact-checker.

Dorsey responded to Zuckerberg’s remarks in a series of tweets on Wednesday night.

“Fact check: there is someone ultimately accountable for our actions as a company, and that’s me. Please leave our employees out of this. We’ll continue to point out incorrect or disputed information about elections globally. And we will admit to and own any mistakes we make,” the Twitter CEO wrote.

“This does not make us an ‘arbiter of truth.’ Our intention is to connect the dots of conflicting statements and show the information in dispute so people can judge for themselves. More transparency from us is critical so folks can clearly see the why behind our actions.”

The president has also reportedly thought about establishing a commission to review complaints about the alleged bias, according to the Wall Street Journal.