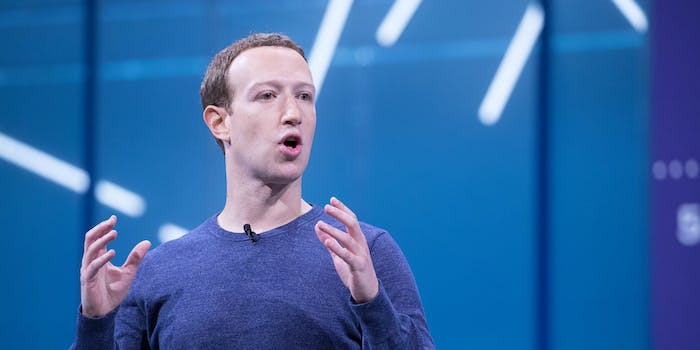 Zuckerberg defends inaction on Trump in call with employees

He called the inaction a 'tough decision' but one that 'was pretty thorough.'

Facebook CEO Mark Zuckerberg defended his decision to not take any action on posts made by President Donald Trump during a call with employees on Tuesday, according to a new report.

Zuckerberg’s stance on Trump’s posts—which have been flagged for “glorifying violence” and were fact-checked by Twitter—has drawn scorn from some of the social media giant’s employees. A group of employees staged a virtual walkout earlier this week protesting the company’s inaction on the president.

The posts that were scrutinized by Twitter were also posted on Facebook, where they did not face any kind of labeling. Zuckerberg laid out his stance on the issue last week when he told Fox News that he did not believe social media companies should be the “arbiter of truth.”

On Tuesday, Zuckerberg defended the decision during a question-and-answer call with employees.

The New York Times reports that Zuckerberg called the decision not to take any action as a “tough decision” but one that he thinks “was pretty thorough.” The Times listened to audio of the call.

The CEO also addressed a phone call he had with Trump last week.

“I used that opportunity to make him know I felt this post was inflammatory and harmful, and let him know where we stood on it,” he told employees.

The Times reports that during the question-and-answer session, most Facebook employees were “pointed” with Zuckerberg, and only one employee expressed support for Facebook’s stance on the president’s posts.

Following the labeling of his tweets on Twitter, Trump signed a social media executive order that targets a bedrock principle of the internet that shields websites from liability over what is posted on them by third-parties.