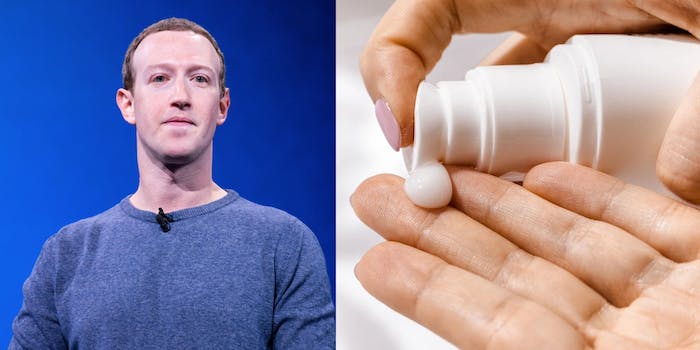 'This photo of Mark Zuckerberg with way too much sunscreen and a dump truck a** is my new sleep paralysis demon.'

Facebook CEO Mark Zuckerberg has once again become a meme after being photographed with his face completely covered in sunscreen.

The billionaire, who was seen on an electric surfboard in Hawaii, appeared bewildered as his security team watched from a boat nearby.

The entrepreneur was compared to a whole host of characters, from mimes and clowns to iconic villains.

“Was trying to think of who Mark Zuckerberg surfing reminded me of & then it came to me,” @RufusTSuperfly wrote.

But it wasn’t just Zuckerberg’s face that was garnering attention. Twitter users left and right couldn’t help but notice his “dump truck ass.”

“This photo of Mark Zuckerberg with way too much sunscreen and a dump truck ass is my new sleep paralysis demon,” @rachellobaugh said.

“No one has ever seen Mark Zuckerberg and the ghost from Spirited Away in the same room, just saying,” @brent_peadbody added.

Zuckerberg is no stranger to being memed. The Facebook founder is often compared to a lizard hell bent on global domination. Unsurprisingly, Twitter users found a way to combine all their favorite Zuckerberg memes.

The comparisons kept flooding in at a merciless pace.

“OMG, I had no clue Mark Zuckerberg was in Bill & Ted 3 as Death’s baby bro, brah!” @nyactor said.

Zuckerberg’s sunscreen was so thick that many questioned whether he was wearing it in place of a face mask.

“I will wear my mask and never complain once,” @ryanfield said. “But I will not wear the mask Mark Zuckerberg wears and you can’t make me.”

Many were convinced that Zuckerberg’s ass could be made of cake following the recent popularity of the “everything is cake” meme.

“Brb cutting Mark Zuckerberg open cause there is no way that ass is not 100% cake,” @my_demon_and_i proclaimed.

In all reality, a thicc sunscreen-slathered Zuckerberg is a step up from his previous status as a lifeless robot determined to appear human.