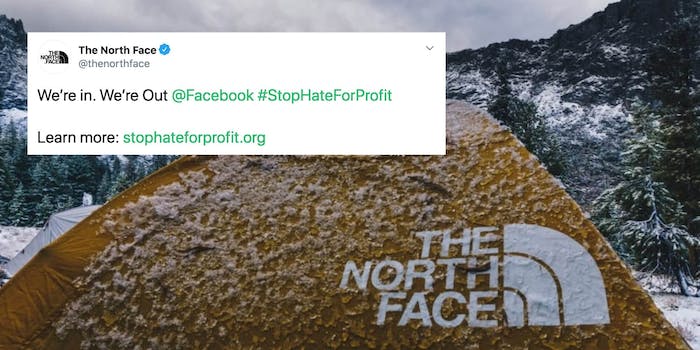 The North Face is pulling its ads from Facebook

The company is fighting the 'racist rhetoric and misinformation' allowed on Facebook.

The North Face announced on Friday plans to boycott Facebook in response to the social media platform’s content moderation policies.

The company, known for its outdoor recreation products, revealed that it would no longer purchase Facebook ads in the U.S.

The first large brand to do so, The North Face’s decision was spurred by a new political campaign known as “Stop Hate For Profit.”

The campaign, backed by organizations such as the NAACP and the Anti-Defamation League, is calling on businesses to stop advertising on Facebook during July.

Facebook is accused by the campaign of numerous offenses, including turning a blind eye to calls for violence against protesters and voter suppression.

“Let’s send Facebook a powerful message: Your profits will never be worth promoting hate, bigotry, racism, antisemitism and violence,” the campaign says.

In a statement on the matter, Steve Lesnard, The North Face’s global vice president of marketing, defended the company’s decision.

“We know that for too long harmful, racist rhetoric and misinformation has made the world unequal and unsafe, and we stand with the NAACP and the other organizations who are working to #StopHateforProfit,” Lesnard said.

The North Face will not be removing its ads, however, from Instagram, a service owned by Facebook.