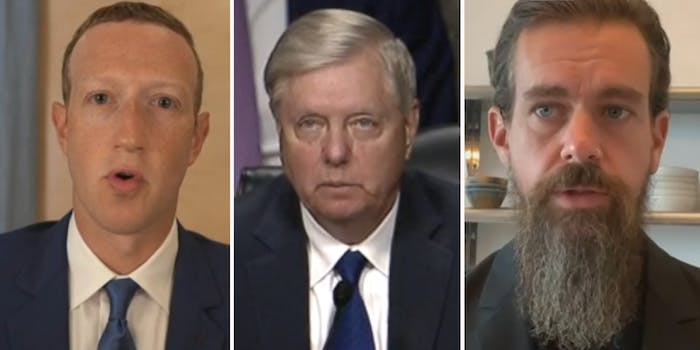 Mark Zuckerberg and Jack Dorsey testified before a Senate committee on Tuesday.

Facebook CEO Mark Zuckerberg and Twitter CEO Jack Dorsey testified before the Senate Judiciary Committee on Tuesday, where they were bombarded by questions about alleged bias and changes to one of the most important internet laws.

Like the last time Zuckerberg and Dorsey testified in Congress, much of the hearing was dominated by accusations of perceived bias against conservatives by social media companies. However, the heads of the two tech giants were also asked about changes to Section 230 of the Communications Decency Act. The law acts as a liability shield for websites and blocks them from being held liable for content posted on them by their users.

The section has been hailed as a vital internet law and tech companies and advocates have said changes to the law could have far-reaching consequences. Despite this, the law has become a target for lawmakers on both sides of the aisle.

It was no different on Tuesday, with Chairman Sen. Lindsey Graham (R-S.C.) and Sen. Richard Blumenthal (D-Conn.) promising that changes were coming to Section 230.

“I think Section 230 has to be changed” Graham said during his opening remarks, later adding: “Section 230 as it exists today has got to give.”

“Change is going to come. No question. Change is on the way, and I intend to bring aggressive and targeted reform to Section 230,” the senator said.

Their stance is not shocking. Both senators have pushed the controversial EARN IT Act, which would change portions of Section 230. The bill has been hotly contested by tech and privacy groups.

However, both Dorsey and Zuckerberg signaled that they thought changes to Section 230 were necessary. Later in the hearing, Dorsey warned against changes to the law but said he thought it was possible to “build upon” it.

“From a historical perspective, 230 has created so much goodness and innovation. If we didn’t have those protections when we started Twitter 14 years ago, we could not start,” Dorsey said, adding: “We do have to be very careful and thoughtful about changes to 230 because going one direction might box out new competitors and new startups, going another might create a demand for an impossible amount of resources to handle it, and going yet another might encourage even more blocking of voices or what’s being raised here which is censorship of voices and changing the internet dramatically.”

Experts and advocates have warned that changes to Section 230 might have the opposite effect than what some politicians—like President Donald Trump—want as they complain about alleged conservative bias.

Others have urged caution with changing the law for other reasons. Reddit, in a filing with the Federal Communications Commission (FCC) about Trump’s executive order that targets the law, said changes to it “would change the very trajectory of the internet.”

The popular site also noted that changes to the law would not just affect the company, but individual moderators who run subreddits.

Fight for the Future, a digital rights advocacy group, has previously said that without Section 230, “social media platforms would likely engage in mass censorship and banning of accounts rather than open themselves up to lawsuits for hosting controversial opinions.”

“Keeping Section 230’s good framework in place is key to maintaining platforms’ ability and right to check the facts, moderate and remove objectionable information. While some senators on both sides of the aisle are wrongly calling for an outright repeal of Section 230, such a drastic step would either punish platforms for their constitutionally protected editorial decisions or else force them to leave up all kinds of hateful, harmful and unwanted content,” Free Press Action Senior Policy Counsel Carmen Scurato said in a statement on Tuesday.