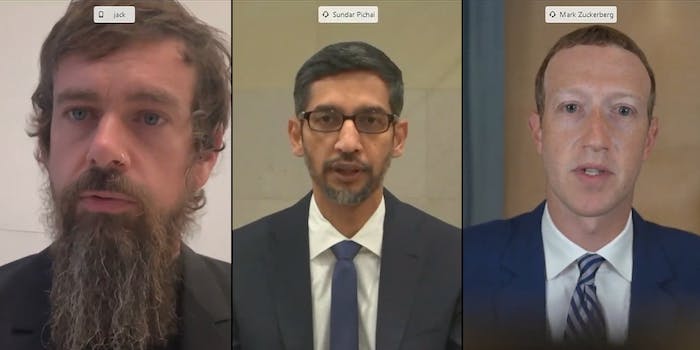 The meeting was ostensibly supposed to be about Section 230.

The Senate Commerce Committee on Wednesday held a hearing that ostensibly was meant to discuss Section 230 of the Communications Decency Act, but mostly devolved into conservative lawmakers lamenting a perceived anti-conservative bias among social media sites.

Sen. Roger Wicker (R-Miss.), the chairman of the committee, kicked off the hearing by saying that Section 230 needed to be changed.

“The time has come for that free pass to end,” Wicker said.

Section 230 acts as a liability shield for websites. Essentially, it shields websites from being sued over what users of the sites post on it. It’s been called one of the most important laws that created the modern internet.

Despite this, the law has come under attack from lawmakers on both sides of the aisle. A flurry of bills have been introduced in Congress and both President Donald Trump and former Vice President Joe Biden have called for Section 230 to be repealed or revoked.

Amid all of this, tech advocates have warned that changes, or outright revoking, Section 230 could have far-reaching consequences.

When the Federal Communications Commission (FCC) was collecting public comments on whether it should move forward with Trump’s controversial social media executive order that targets Section 230, Reddit warned that that changes to the law “would change the very trajectory of the internet.”

The popular site also noted in its comment that changes to Section 230 would open up moderators of its subreddits to liability.

Those kinds of consequences were mostly ignored on Wednesday, with Republican lawmakers zeroing in on a perceived bias by social media companies against conservatives.

The lawmakers spent most of the hearing grilling Twitter CEO Jack Dorsey, Facebook CEO Mark Zuckerberg, and Alphabet CEO Sundar Pichai about that.

Dorsey took the brunt of the questions about perceived bias, with Republican lawmakers touching on President Donald Trump’s tweets being flagged and labeled for misinformation about voting and Twitter’s initial decision to block links to a controversial New York Post story about Hunter Biden earlier this month.

Twitter initially said the story violated its hacked material policy, but later said it would change the policy in the wake of the outcry—especially among lawmakers—over the story being blocked.

Several Democrats on the committee criticized the Republican leadership for holding the hearing just ahead of next week’s election, with Sen. Richard Blumenthal (D-Conn.) saying they were trying to “bully and browbeat” the companies to loosen their policies as the election loomed.

Meanwhile, Sen. Brian Schatz (D-Hawaii) declined to use his time to question Dorsey, Zuckerberg, and Pichai because he felt that the hearing was a “sham.”

Trump also weighed in, tweeting “repeal Section 230!” during the hearing. It’s worth noting that experts have said Trump benefits from Section 230, because without it, websites might take down posts that could subject them to being liable.

While most of the questions centered around bias or other gripes with Silicon Valley, Section 230 did actually come up briefly.

Sen. Shelley Moore Capito (R-W.V.) asked the three tech CEOs about the “otherwise objectionable” portion of the law, specifically if they would be open to “redefining” that part of it.

The immunity provided by Section 230 allows platforms to take down and moderate content they deem “otherwise objectionable,” in addition to a number of other things.

Dorsey said Twitter interpreted “otherwise objectionable” as “anything that is limiting potentially the speech of others.”

Meanwhile, Zuckerberg said Facebook defined “otherwise objectionable” as including “generally bullying and harassment of people on the platform.”

He also added proposals to change Section 230, including getting rid of “otherwise objectionable,” could “limit our ability to remove bullying and harassing content from our platforms.”

“I think we need to be very careful in how we think through that,” Zuckerberg said.

However, Zuckerberg also told Capito that he thought “it may make sense to modify 230 at this point, just to make sure it’s still working as intended.”

Finally, Pichai saiid because content is “so dynamic,” the “otherwise objectionable” portion of the law gives websites “flexibility.”

Hearing gets blasted by tech advocates

Both before and after the hearing, the Senate Commerce Committee’s questions—and the tech executives’ testimony—were swiftly criticized.

Sen. Ron Wyden (D-Ore.), one of the co-authors of Section 230, called Wednesday’s hearing a “sad spectacle.”

“When it comes to writing laws usually you need two things—first, lawmakers need to agree on what the existing law says, and second, they need to know what problem the new law would solve. After watching the hearing today, I don’t believe my Republican colleagues have read the First Amendment, let alone Section 230,” Wyden said in a statement.

“I stand ready to take on big tech and ensure that users, free speech, and innovation are always the guiding light of tech policy. I’m all for comprehensive privacy laws, stronger antitrust enforcement, and, importantly, laws to better protect and empower the vulnerable online. But today’s sad spectacle shows how far this body is from having a rational debate about how to make the internet a better place.”

Evan Greer, the deputy director of Fight for the Future, said lawmakers have turned Section 230 into a “partisan football to kick back and forth as they each attempt to ‘work the refs’ ahead of Election Day.”

Fight for the Future collected comments in opposition of Trump’s Section 230 executive order to deliver to the FCC.

“While Section 230 is often incorrectly portrayed as a ‘gift’ or ‘prized liability shield’ for Big Tech, in fact it is a foundational law that has allowed the best parts of the internet to flourish by enabling websites and apps to host user-generated content like videos, photos, memes, music, reviews, comments, and opinions,” Greer said in a statement, adding: “We need lawmakers to take meaningful action to rein in the growing power of Big Tech companies, like breaking up monopolies, mandating data portability and interoperability, and enacting strong Federal data privacy legislation that makes surveillance capitalist business models illegal.”