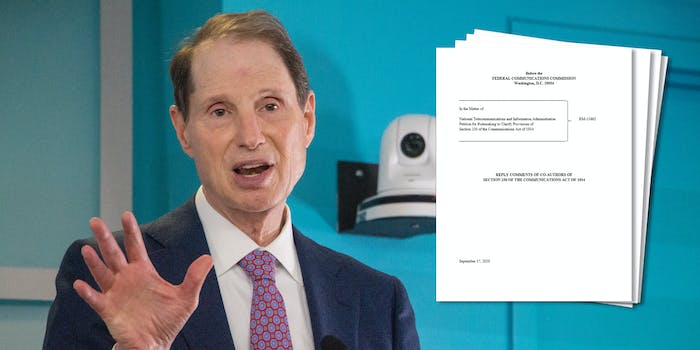 Sen. Ron Wyden (D-Ore.) and former Rep. Christopher Cox (R-Calif.), the authors of Section 230 of the Communications Decency Act, filed a comment with the Federal Communications Commission (FCC) picking apart the arguments for dismantling the law.

Section 230 shields websites from being held liable for content posted on them by their users. It’s been called “the 26 words that created the internet” and “one of the most valuable tools for protecting freedom of expression and innovation on the internet.”

Despite this, the law has been under fire from both sides of the aisle. President Donald Trump signed an executive order in May that asks the FCC to “clarify” Section 230. As part of that process, the FCC opened up public comments for people to weigh in on it.

Advocates and websites have argued that changing the law could have far-reaching consequences online, with Reddit saying it “would change the very trajectory of the internet.”

Wyden and Cox filed a reply comment on Thursday poking holes in the arguments for changing the law.

“This reply addresses certain assertions of both law and fact made in several of those comments that we know to be inaccurate, based upon our experience with the law in question,” their comment reads. “We have focused in particular on points that have been raised by multiple commenters, indicating that the views expressed are commonly held.”

First, Wyden and Cox address whether the FCC has the authority to do what the executive order asks of them. It’s been a question raised ever since Trump signed his executive order.

Wyden and Cox note, as the authors of Section 230, that the FCC does not.

“Several commenters have repeated the claim in the Petition that ‘[n]either section 230’s text, nor any speck of legislative history, suggests any congressional intent to preclude the Commission’s implementation.’ In fact, however, as the authors of the legislation and the floor managers of the debate on the bill in the House of Representatives, we can assure you the very opposite is true.”

They also argue against the idea that Section 230 is “outdated” and therefore needs reform, an “urban legend” they said they want to “put to rest.”

The current senator and former lawmaker note that Section 230 was written to address the flood of user-generated content making its way online, something that is “not a problem the internet will ever grow out of.”

“Far from wishing to offer protection to an infant industry, our legislative aim was to recognize the sheer implausibility of requiring each website to monitor all of the user-created content that crossed its portal each day,” their comment reads.

Wyden and Cox also touch on several other arguments brought up during the debate. You can read all of their comment here.