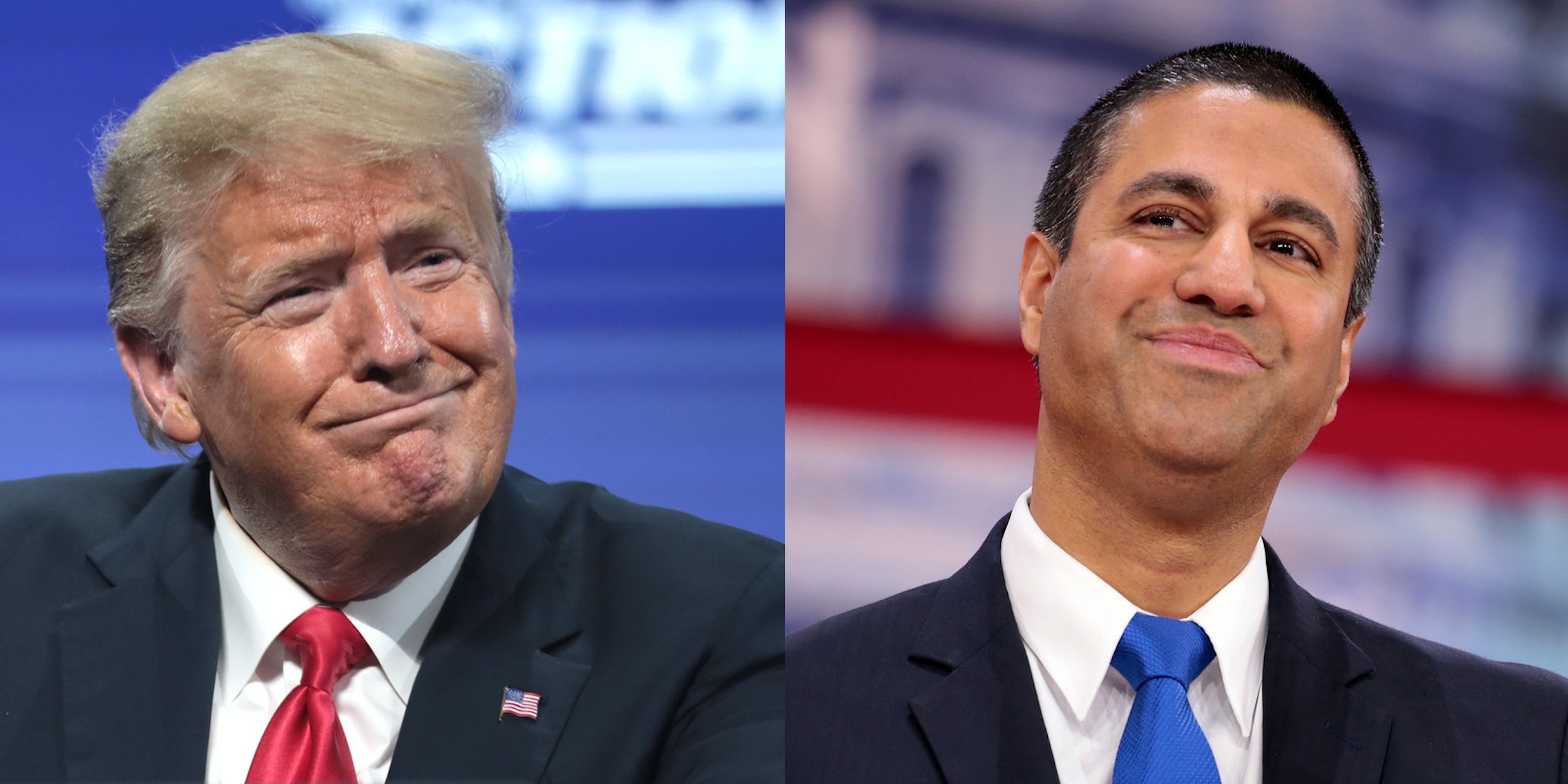 One opinion Ajit Pai is ignoring on Trump’s social media order? His own

Pai doesn't seem to have the same criticism of presidents weighing in on FCC matters as he used to.

As Federal Communications Commission (FCC) Chairman Ajit Pai gets ready to consider President Donald Trump’s controversial social media executive order, there is one person’s opinion he should probably take into consideration: his own.

Pai has tried to define his tenure at the head of the agency as being against “heavy-handed” regulation and has promoted a “light-touch” approach to regulation industry. And yet he seems to be totally fine with the FCC jumping headfirst into government regulation with President Donald Trump’s controversial social media executive order.

Pai also took issue with former President Barack Obama weighing in on how rules establishing net neutrality played out. Yet, now he appears to be more than willing to carry out Trump’s executive order that targets Section 230 of the Communications Decency Act.

Section 230 shields websites from being held liable over what its users post. Essentially, the law says that if a user makes a post that is illegal, someone can sue that user, but not the platform itself. The law has been hailed as being responsible for why we have the modern internet, which is filled with user-generated content.

Trump is far from the only one targeting the law. Lawmakers have introduced several bills that target Section 230, and even former Vice President Joe Biden has called for the law to be “revoked.”

Trump’s order—which comes as he’s been extremely vocal about Section 230—asks the FCC to “clarify” the provisions of how websites get Section 230 protections. Pai last week said the agency would move forward with what the order asks of the agency.

It’s a stark pivot for Pai, who dissented to the 2015 Open Internet Order by claiming that Obama’s video stating that he wanted to see the FCC enact net neutrality rules was the president meddling with the independent agency.

In the YouTube video, Obama came out in support of net neutrality rules and said he was “urging the Federal Communications Commission to do everything they can to protect net neutrality for everyone.” In the video, the former president also noted that the FCC was an independent agency and that “ultimately this decision is theirs alone.”

Which is pretty much exactly what is happening with Trump’s social media order.

The president has repeatedly called for the “repeal” of Section 230 or to “strip” websites of the protections under the law. While he hasn’t specifically said—or released a video—calling on the FCC to do that, it is what his social media order asks the agency to do.

The order directed the National Telecommunications and Information Administration (NTIA), a part of the executive branch, to file a petition for rulemaking with the FCC. The order asks the agency to “clarify the provisions” of Section 230.

While Pai danced around the question as to whether the agency would take up the NTIA’s petition, last week he announced that the FCC would move forward with Trump’s executive order.

The decision prompted swift condemnation from tech groups, lawmakers, and even members of the FCC.

The FCC did not return a request for comment by the Daily Dot.

Meanwhile, in his net neutrality dissent, Pai argued that he would oppose the order because the FCC did not have the authority to carry out the changes.

“In short, because this Order imposes intrusive government regulations that won’t work to solve a problem that doesn’t exist using legal authority the FCC doesn’t have, I dissent,” Pai wrote at the time.

There have been numerous questions raised about whether the FCC has the authority to carry out Trump’s Section 230 order. In fact, shortly after Republican Commissioner Michael O’Rielly raised such concerns, Trump revoked his re-nomination to the FCC and instead nominated an NTIA staffer who reportedly had a hand in crafting the executive order.

Pai insisted last week that those concerns wouldn’t be a problem, saying in a statement that the FCC’s general counsel “has informed me that the FCC has the legal authority to interpret Section 230.” Pai did not elaborate on how the FCC has authority.

While Pai has pushed a deregulatory agenda—just look at all of his statements about the net neutrality repeal—it seems like an about-face to now wade into Section 230 regulations. Pai kicked off his tenure as chairman by saying he wanted to take a “weed whacker” to regulations.

Now, with Trump in charge, that weed whacker is apparently going back in the shed.