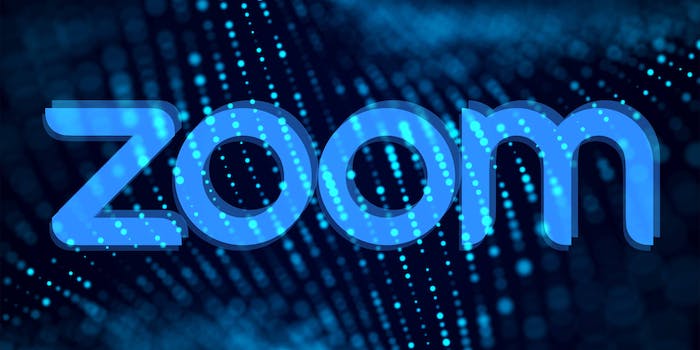 It can let your boss know if you aren't paying attention.

With many companies, governments, and schools shuttering their workplaces for the foreseeable future and asking employees to work from home to mitigate the spread of coronavirus, the cloud meeting app Zoom has surged to the No. 3 spot in the Apple App Store’s free app rankings, beating out Netflix, YouTube, Instagram, Snapchat, and Messenger. In Italy, Google’s Hangouts Meet and Classroom are the most downloaded apps of any category.

And as it’s spiked in popularity, people are raising concerns about the kinds of data it collects on users.

Zoom declined to comment on its increased user base and whether that has led to any problems with its functionality, though at least one educator reported via Twitter that the platform has pulled some features like dial-in by phone from their free accounts to encourage users to upgrade to paid accounts.

At the end of January, Zoom CFO Kelly Steckelberg announced that average meeting minutes were up significantly.

The software firm Productiv determined that Zoom usage was up 30% from the beginning of February for their clients under travel restrictions, compared to Microsoft Teams usage which was up 20% in the first week of March. Zoom’s stock is up more than 20% as well, despite the stock market’s overall instability. Cisco Webex, which offers many digital work services, announced that free sign-ups in impacted countries are up seven-fold versus prior to the outbreak.

Indeed, Zoom’s Service Status page highlights some of the degraded performance problems users have tweeted about, from cloud recording processing times to issues sending and receiving files. Significant but temporary outages occurred on March 5, 13, and 17. Other teleconferencing services like Microsoft Teams have experienced high-traffic outages as well.

Network operators like DE-CIX have set world records for data throughput in the meantime.

Microsoft Teams, Google Classroom, and Slack have become popular alternatives to office meetings as well during the pandemic and in response to increased demand, all are offering certain product features for free.

Zoom typically maxes meetings out at 45 minutes for free accounts. In China, those time limits are gone. It’s all in the name of helping others, but it also doesn’t hurt to acquire a lot of new first-time customers who might return to the service again in the future.

There’s a lot of appeal in using apps like Zoom to telecommute. Unlike a standard video conferencing tool like Skype, Zoom allows you to see all of your employees at once. If your home is particularly messy, you can even use a virtual background through the service to hide it.

The functionality of Zoom, Google Hangouts, and Microsoft Teams will continue to be tested in the wake of the Trump Administration’s March 16 decision to expand telemedicine coverage and lift HIPAA rules against telemedicine calls. Current private telemedicine providers like Doctor on Demand and Express Care Online can barely keep up with demand due to the extreme volume of patients seeking advice about COVID-19—there are simply not enough clinicians available to take on the new caseload. It’s only a matter of time until doctors everywhere embrace apps like Zoom and Microsoft Teams simply due to their relative stability.

But in our rush to embrace these services, there’s a darker side many have not considered: their privacy policies. On the website, Zoom’s privacy policy highlights that if you participate in a Recorded Meeting or subscribe to their in-house cloud recording services, the company collects personal data associated with call participants. That can include your name, address, contact information, credit cards, employer, job title, and Facebook profile.

In a section titled “Does Zoom sell Personal Data?” the company says it “depends.” Although Zoom does not run ads on their app, the company uses tools like Google Ads and Google Analytics that do require personal data, and Google can use that information to “improve its advertising services for all companies who use their services.”

The default setting is to collect this data—and, worryingly, last year the privacy organization EPIC complaint to the FTC that “Zoom intentionally designed its web conferencing service to bypass security settings and remotely enable a user’s web camera without the knowledge or consent of the user.”

EPIC claims this kind of design exposes users to the risk of remote surveillance and unwanted video calls.

Zoom defends its use of personal data as essential to maintaining the service for its users, but some Twitter users have highlighted how this can be used against workers.

For example, Zoom offers a tool called attendee attention tracking that alerts a host if a user has stopped paying attention.

If a manager uses Zoom and enables this feature, they can tell if an employee minimizes the Zoom app for more than 30 seconds while someone is sharing a screen—this means that the manager hosting the call can ensure all users have their Zoom meeting open and active.

Even if these policies seem shocking to the average teacher or salaried employee using a service like Zoom for the first time, others will point out that these are fairly standard rules that most services apply as well. This country simply has not addressed data concerns to the extent that the average person would know that a specific data collection policy is potentially of concern. And with a lot of free tools popping up in the wake of the novel coronavirus outbreak, this could be the first brush of tech overreach that many people encounter.