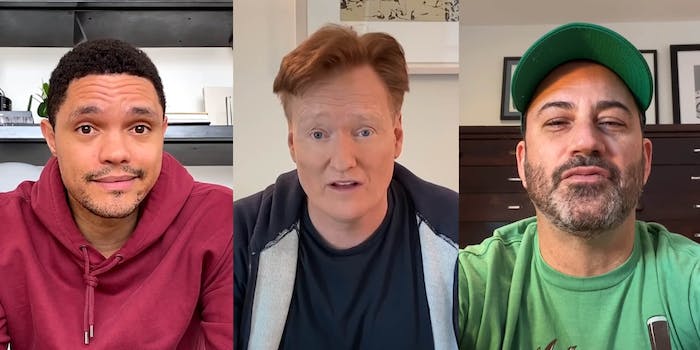 The coronavirus has closed TV and film productions down left and right, and in the wake of preventing further spread of COVID-19, even late-night shows—which have become something of a comforting staple in the past few years as hosts had to address tragedies and uncertain times—have shut down. But several of the hosts aren’t letting that stop them from entertaining their audiences in inventive ways.

Initially, several late-night shows, including The Late Show, Jimmy Kimmel Live, and The Tonight Show, all filmed in their studios without an audience and with minimal crew. Now, even that was been scaled back as every show has canceled production for the time being. As of press time, Conan is the first slated to begin airing new episodes on TV with staff working remotely, guest interviews taking place with a video chat, and the show filmed on an iPhone.

“We are in the business of making content and this what we do. The idea that we can’t do it is a little frustrating,” Conan executive producer Jeff Ross told Variety. “We have a staff that wants to work, that doesn’t want to not get paid, and you just want to keep the business going.”

Even though none of the other hosts have revealed when they’re returning just yet, that doesn’t mean they’re letting the coronavirus stopping them from delivering monologues, interviews, and even just comforting observations from their homes and outdoors—while practicing social distancing, of course. Several of them are also using their videos to raise money for various charities.

And during what’s, at the very least, a very weird time in entertainment, many of these hosts have more or less turned into vloggers, giving us a glimpse into how the hosts of late-night live.

“Hello there! Well, well, well, um, this is weird, isn’t it?” John Oliver said at the beginning of the latest episode of Last Week Tonight. “This is definitely weird.”

Oliver was located in a white room that looked like he was right in the middle of Janet’s void from The Good Place in an undisclosed location that wasn’t his usual studio. Why? Because, he explained, both his studio (at the CBS Broadcast Center) and his office building have had confirmed coronavirus cases. He assured viewers that he was filming with a very limited crew and that his staff was working from home.

He then launches into his big topic of the show, a second video on the coronavirus. His commentary is sharp and informative as ever, and with the exception of no laughter and the white background, it feels almost like any other Last Week Tonight episode.

Conan O’Brien’s social distancing videos are the furthest away from his normal schtick, although his quintessential humor still pulls through. With frequent reminders to wash your hands included, O’Brien offers alternatives laying around your house or apartment that you could use if you can’t get your hands on toilet paper.

Stephen Colbert took “filming from home” to another level by bringing viewers straight to his bathtub for a low-fi deep dive into his monologue. He’s since taken subsequent videos outside—and with more graphics—but his first dispatch captures some of the same charm that his audience-less monologue did. He doesn’t need an audience to reel you in.

Need survival tips? Samantha Bee offered some from outside the wooden shed she got while she prepared for something like this for years. As it turns out, chopping wood is a lot harder than it looks.

Jimmy Fallon is also filming from home, and he’s already experiencing—like so many people who are no longer working in their offices—the quirks of working from home: He can dress more casually, but it also gives his children an excuse to hang out with him while he works, which works wonders. And he’s even testing out lower-quality video for a lengthy interview with fellow dad Lin-Manuel Miranda, who touches on learning to home school. (And yes, there’s a musical performance at the end.)

Trevor Noah is dressing more casually and located on his couch, but otherwise, it’s largely the same Daily Show. It has plenty of clips and graphics to showcase the larger coronavirus story, but it also has sillier moments embedded for some levity. At one point, Noah phones in correspondent Roy Woods, Jr., who relays a different kind of coronavirus-inspired horror story involving a bar of soap and a clogged toilet.

Jimmy Kimmel also embraced the more kid-friendly and DIY elements of filming at home (he says his daughter made the opening for him), although he noted that while filming his monologue a couple of days ago, he was hiding in his office away from his children. While he does tackle some of the day’s news, he also chats with his sidekick Guillermo Rodriguez to see how he’s holding up. And how is that? About as well as the rest of us.