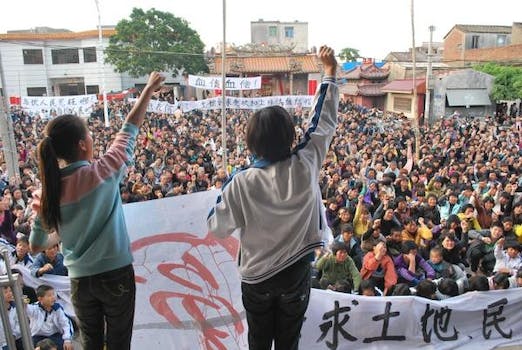 China’s microblogging services are preventing news of a rebellion in Wukan from spreading, but a Daily Telegraph reporter managed to provide this first-hand account.

An entire Chinese city has risen up against local communist party officials, and the revolt is being live-tweeted—except from within China, where the country’s censors are slicing any mention of the events from domestic social media.

The tense situation in Wukan, a village of 20,000 in China’s southern Guangdong province, has been developing for months. Villagers are particularly furious over the communist party’s land grabs—allegedly forceful takeovers of village land by the communist government, often for the benefit of the wealthy or politically connected.

Demonstrations began in September and were followed by a 4,500 person march last month. But things really came to a head last week, when authorities arrested members of a village board attempting to negotiate a settlement with the government. One of those arrested was Xue Jinbo, a village representative, who died in police custody. The villagers revolted. By Monday, the village’s entire communist government had fled.

Wukan’s 20,000 residents have barricaded themselves in with chopped-down trees and bamboo spikes. Its small fishing fleet—the villagers’ main source of income—has been blocked from leaving the harbor. An attempt to recapture the village with 1,000 armed police officers earlier this week failed. Meanwhile, the village only has 10 days of worth of food remaining.

China’s microblogging services are making sure news of the rebellion doesn’t spread beyond the barricaded walls of Wukan itself. China blogger Charles Custer notes that several of the Sina Weibo accounts he follows have been deleted or had offending tweets removed.

“Citizens of Wukan are attempting to spread news of their movement via Weibo,” Custer wrote on his blog, ChinaGeeks, “but unsurprisingly, posts and accounts are being deleted with great speed.”

The censorship comes as little surprise, as the government has hinted for months of an imminent a crackdown on what it calls dangerous “rumors” spread through Chinese social media.

On Twitter, at least, live updates and photographs have been poring in, the majority from Malcolm Moore, a Daily Telegraph reporter who managed to break in to the barricaded city. Moore told the Daily Dot he accessed Twitter through a virtual private network, or VPN—a common tool used by foreigners and tech-savvy Chinese to evade Internet censorship. (Twitter is blocked in mainland China.)

Moore’s tweets and his stories in the Telegraph provide what is likely the only first-hand account of the events in English.