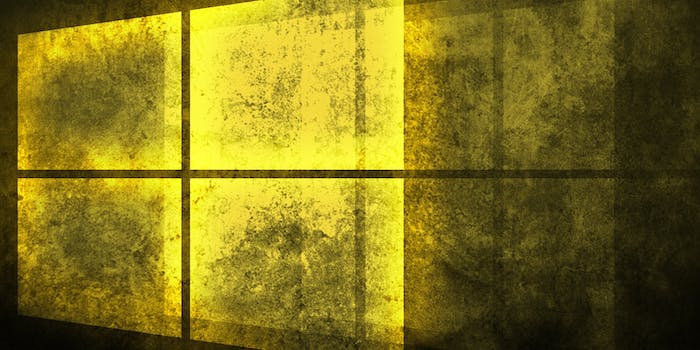 Here’s what we just learned about Windows 10

If this doesn't make you upgrade from Windows 7, we don't know what will.

Wednesday at a press event held at its headquarters in Redmond, Wash., Microsoft finally divulged official information regarding Windows 10. The operating system’s latest iteration was made known to the public late last year, during Microsoft’s Windows 9 event.

So what features and perks related to the much-anticipated OS do we need to know about? Here are a couple of highlights:

Forget about that time Microsoft took out the Start button from Windows 8, or the time Windows 8.1 brought it back but failed to mimic how it worked on Windows 7. The brand-new Start menu on Windows 10 features a transparent design that combines Windows 7’s organized-list style with Windows 8.1’s colorful Live Tiles view, keeping Microsoft’s focus on providing stellar visuals alive. 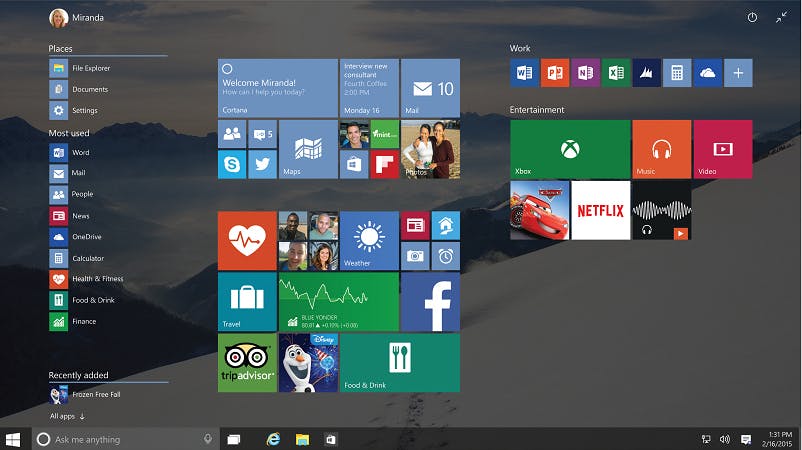 The whole menu takes up the full screen, but can be resized to a smaller mode so those who are still getting used to switching from Windows 7 can be more comfortable. 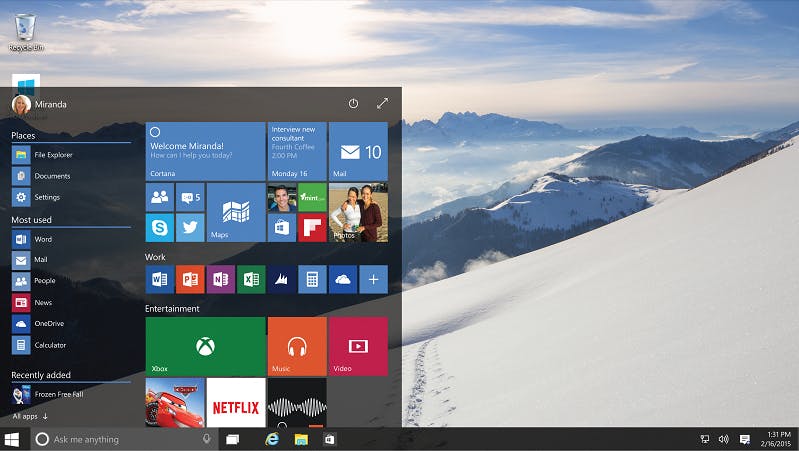 Microsoft has added an Action Center that keeps together common tasks—like Bluetooth and Wi-Fi controls—as well as notifications from various apps, making it easier for you to view all of them quickly and in one place. 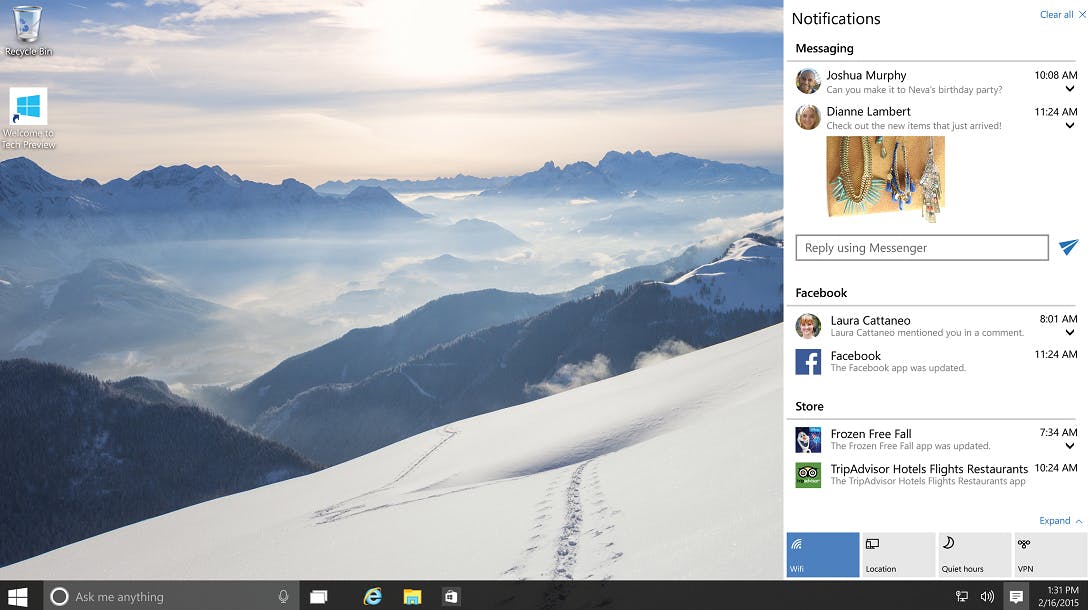 Action Center is actually synced across all your devices, so when you dismiss a notification on your Windows 10 phone or tablet, it will simultaneously disappear on your desktop.

Gone are the days of not knowing where to go to tweak your computer’s or an app’s settings—they are all presented with a cleaner, more minimalist look.

As we previously reported, Windows 10 will show up in its classic desktop mode on devices that have a keyboard or mouse connected. Without them, Windows 10 will launch in tablet mode, featuring the Live Tile layout. This feature is useful and necessary in streamlining Windows 10 use between various devices—whether you’re in the comfort of your own home in front of your PC, or in your car with your tablet in hand, the experience will be seamless and consistent.

5) Features that are in the works

Joe Belfiore, Corporate Vice President of Operating Systems at Microsoft and host of the Windows 10 walkthrough during the Microsoft event, announced feature builds that are not yet finished but will be coming over the next three-to-five months. 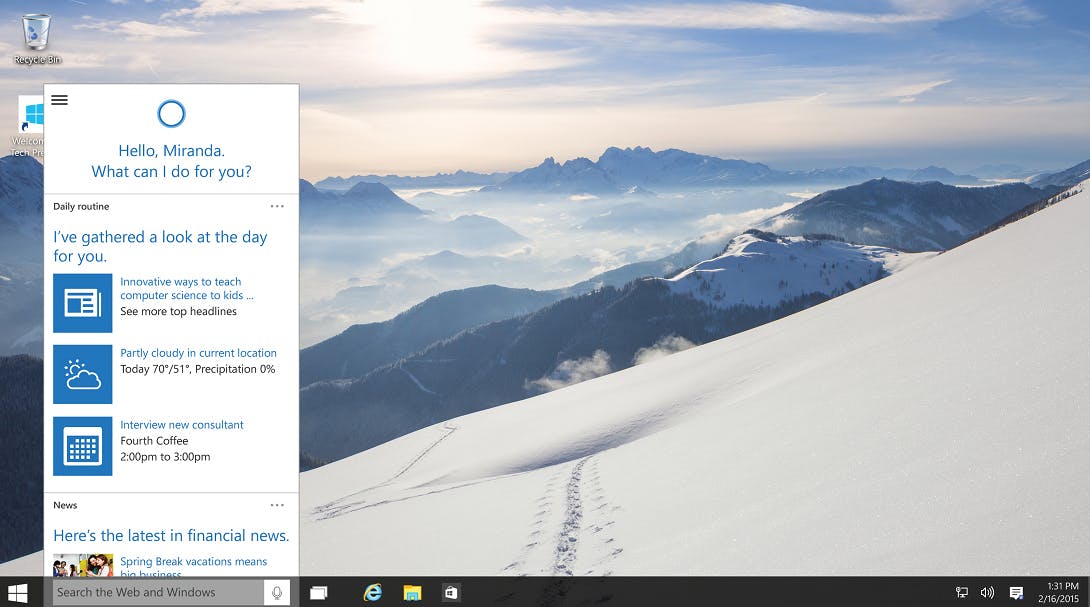 Microsoft’s personal assistant, after making its debut on smartphones, will become available on the desktop through Windows 10 as its main search tool. While it’s expected to fulfill all-encompassing searches that cull content both locally, on OneDrive, and on the Web, Cortana’s intelligence does not stop there.  It can launch your music app and even turn down the volume if you tell it to “be quiet.” It can take dictation, so you can send emails without the need to actually type. Like most technologies these days, Cortana gets better and smarter the more you use it, but the user still has full control on what it can and cannot do—through the Notebook feature.

Windows 10 on phones and tablets

For the Microsoft event, Belfiore opted to demonstrate a version of Windows 10 specifically tailored to devices smaller than 8 inches, and it actually looks almost better on the phone than on the desktop. The background image is behind the tiles, making the interface look cleaner and a lot more attractive. It also has the new Action Center that works in sync with your desktop, as well as a view of the Settings that is more organized and easier to look at.

Nifty tweaks that optimize overall phone use were also added, such as the ability to reply in-line to notifications while in minimized view and being able to move the keyboard all over your phone screen, wherever it’s most accessible and out of the way.

Lastly, Microsoft’s mobile messaging has been vastly improved, with Skype’s full integration into Windows 10 phones. Users with Skype accounts will automatically be detected and messages sent through the service will be sent into the SMS app and vice versa, when it’s more convenient. Although Skype was the only messaging app mentioned during the demo, integrations with other popular messaging apps are in the works.

A whole slew of brand-new universal apps will come with Windows 10. More polished Calendar, People, and Photo apps will appear consistent on both PC and phone. Word, Excel, and PowerPoint will be included on all phones and small tablets, as well as wireless printing support in Office for touch devices.

Outlook has also gotten an upgrade on both platforms. The mail client for the phone has full Word capabilities in terms of style and formatting, and maintains them no matter what device you use to check your email. The desktop version’s interface can now be personalized further, with a background photo of your choosing.

A new and improved Photo app will aggregate all the photos sourced from your various devices and present you a simpler view of your photo collection, minus the duplicates. The Photo app also fulfills certain automatic fixes and tasks, such as enhancing photos by reducing red-eye and brightness and arranging photo uploads into easily shareable albums, complete with featured image.

Other upgrades include a Maps app with Cortana integration and a Music app that reportedly will allow users to put their entire music collection in OneDrive. Belfiore re-iterates that while not all of these features will be available in the first build, they are all in the works and are coming soon.

Good news for those of you who despise Internet Explorer—Microsoft will be bringing in a brand-new browser for Windows 10, codenamed “Project Spartan.” Though its official name wasn’t exactly revealed, its three main features were.

First is the browser’s Note-Taking Mode, which allows you to draw or write all over a Web page, then share your annotations right on the Web page. That’s right—on this browser, you can touch, use your pen, or click anywhere on the page to add a comment. Then you can either share the page containing your notes or save the page in its entirety. You also have the option to save only parts of it, which you can limit using a clipping tool that shoots it automatically into OneNote. 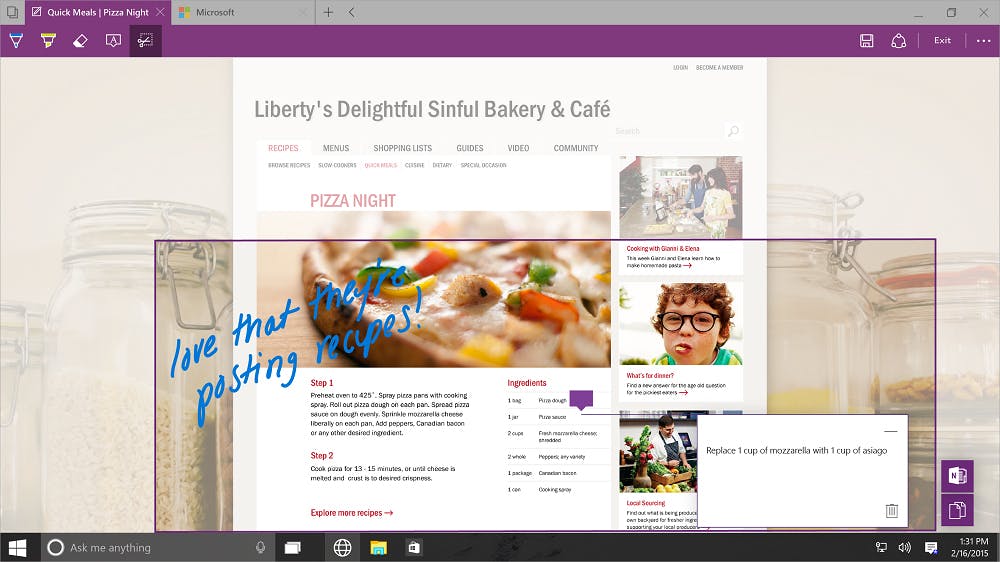 Next feature is the Reading Mode, which turns Web pages into pages of a book, without the usual mumbo jumbo that clutters your browser. You also have a Reading List that will sync across all devices that also stores content, so you can read them offline at a later time.

Finally, the new browser will come with full Cortana integration, showing smart search things like weather and flight updates as you type the search into the address bar. When you visit a restaurant’s website, Cortana will show you its menu, contact info, hours of operation, location, and directions. Right-clicking on words will give you their dictionary definitions.

While you are playing a video game on the Xbox One, you can simultaneously stream it onto a Windows 10 device, and be able to fully control and view it remotely. Additionally, users who play games on Windows 10 PCs and Xbox One will be able to play across platforms. There’s a lot going on here, so check out what Microsoft has brewing for the future of gaming.

HoloLens. What more do you need? 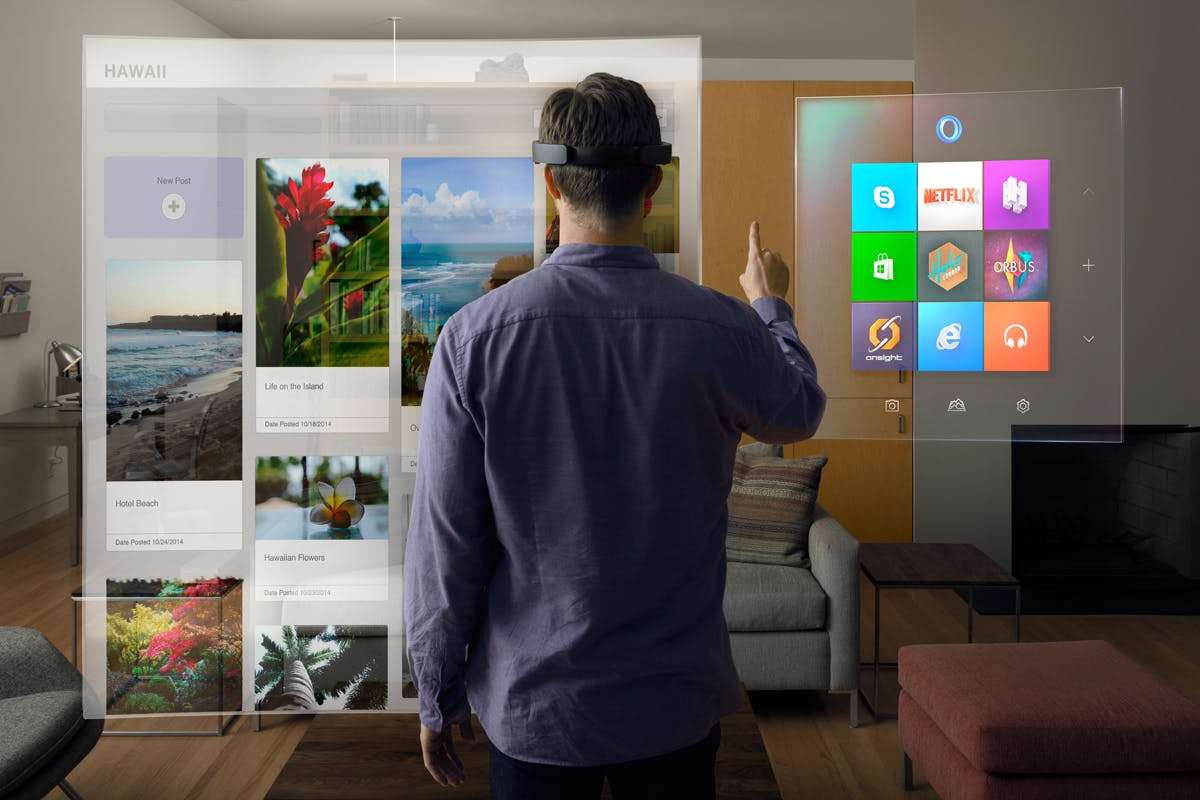 When can you try Windows 10?

All these things to be expected from Windows 10 just became all the more sweeter when it was announced that for the first year after Windows 10 becomes available, a free upgrade to the new OS will be given to users with devices running Windows 7, Windows 8, and Windows 8.1—Windows Phones included. Once a device has been upgraded, Microsoft will “[keep] it current for the supported lifetime for the device,” says Myerson. “Windows 10 is so much more than the latest version of Windows. Windows 10 changes the rules of the game.”