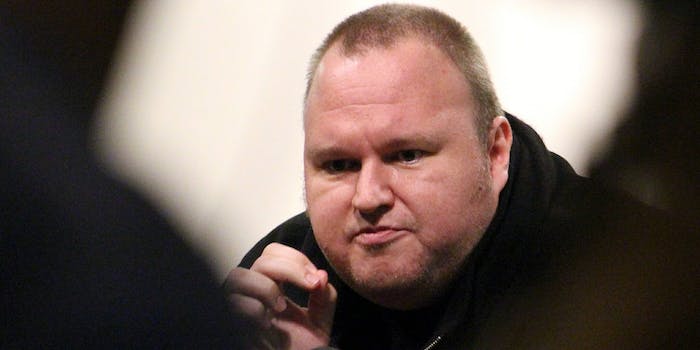 In case you’re confused by his outsized personality, his similarly-named sites, or his insanely convoluted legal proceedings, we’ve put together an explainer of who Kim Dotcom is and what’s at stake.

Who is Kim Dotcom?

This question alone could easily be its own explainer. In short, he’s a 41-year-old German hacker and Internet entrepreneur who moved to New Zealand and founded two free cloud-storage companies in the past few years. First it was Megaupload, which lasted from 2005 to 2012. Then, after the U.S. and New Zealand governments shut Megaupload down, he created its sequel, simply called Mega. The second site is similar, though it offers users the added benefit of encrypting their files.

As for Dotcom himself, he’s huge, in pretty much every sense of the world. Physically, he’s reportedly 6-foot-7 and some 350 pounds (or at least approaching that; accounts vary). His personality is enormous, as are his I-just-won-the-lottery tastes. (The best insight into his character comes from this 2012 Wired profile.) And while he’s hardly the first person to make money from the Internet, how many Web entrepreneurs do you know of, even the really rich ones, who gleefully show off their mansions, huge estates, $100,000 custom Swedish beds, and fancy cars?

Are his sites any good?

Sure. Megaupload did, and Mega does, offer a good bit of online storage for free. (Disclosure: It’s not my go-to storage site, but I use the free Mega occasionally.) You can find plenty of former Megaupload users who are salty about its closure, though. After it went down, a lot of users never saw their files again. A lot of user content ended up stored with a Dutch site called Leaseweb, which said that it wiped its servers for other uses after going more than a year without being paid or hearing anything about that data. Dotcom lamented it as “the largest data massacre in the history of the Internet.”

Why is he named Kim Dotcom?

His paternal line doesn’t trace back to a professional website, if that’s what you were thinking. Like a lot of hacker types, he’s gone by a few personas over the years. He was born Kim Schmitz and for years went by “Kimble.” He legally changed his last name to Dotcom in 2005.

At least as early as 2001. A Guardian story from that year spoke of Dotcom—back then, he was still Schmitz—as a reformed hacker who was hopelessly optimistic about his venture at the time, an online retail store called LetsBuy.It. He was living the big life, even then: He had a jet, a helicopter, a yacht.

A year later, LetsBuy.It’s stock was almost worthless, and Dotcom was convicted of insider trading.

What’s he accused of now?

Dotcom’s charges—and it’s really worth noting here that what he’s fighting now is whether he should be extradited to the U.S., not whether he’s guilty—are often reduced to something like “facilitating copyright infringement.” And to be fair, Megaupload made sharing pirated files extremely easy: Pretty much anybody could simply upload a movie file to the site and share the link with whomever they wanted.

But his actual charges are a little more complicated. The U.S. has accused Dotcom, as well as three others who were deeply involved with Megaupload, of operating what they call the “‘Mega Conspiracy.” And what’s that? It’s “a worldwide criminal organization whose members engaged in criminal copyright infringement and money laundering on a massive scale with estimated harm to copyright holders well in excess of $500,000,000 and reported income in excess of $175,000,000,” according to the U.S. Department of Justice.

Yeah, that number’s questionable. Our deep dive about Hollywood-funded piracy studies found that companies that allege mass copyright infringement have some pretty creative ways of coming up with the highest possible amount of money they’ve lost to piracy. Remember how the record industry used to sue people for insane amounts of money for using programs like Kazaa? U.S. copyright law allows for damages of up to $150,000 per instance of deliberate infringement. Multiply that by whatever, and you get $500 million.

How did Megaupload make its money?

The U.S says that premium accounts—which you could rent for a few dollars a day or buy a lifetime membership for $260—brought in $150 million and that online ads brought in an additional $25 million. So, over the course of its existence, the guys at Mega allegedly made around $175 million.

That sounds pretty standard for a big Web company. What’s the “conspiracy?”

Every major site that’s centered around user-submitted content has to deal with users submitting copyrighted material. It’s simply the reality of the Internet. Per the U.S.’s Digital Millennium Copyright Act (DMCA), sites won’t be charged for that user content—they’ll be given “safe harbor”—if they follow certain procedures for dealing with it.

But the U.S. claims Megaupload not only didn’t do its fair share to earn safe harbor, it was was exceptionally lax. It says Dotcom and crew winked at users who helped each other pirate content with its “uploader rewards” program, which paid and gave extra benefits to users who uploaded the most popular content, which, of course, was often whatever hot movie or album or program that people would otherwise pay for.

So he’s actually charged with… ?

I assume that when Dotcom was served, it was cordial and polite.

Why does the U.S. care so much about what a German-New Zealand pirate does?

Unclear. But I’ll just point out that the MPAA and RIAA—the biggest trade organizations representing Hollywood’s and the record industry’s interests in the U.S., respectively—wield heavy influence in Washington.

So, he’s finally on trial for something he may have done until 2012.

Nope! This is an extradition hearing. It’s to decide whether Dotcom and his three closets Megaupload companions should be tried in the U.S. because these are U.S. charges. It’s generally thought that the U.S. will be tougher on him than New Zealand.

Dotcom has an interesting advocate in his corner, though: Harvard professor, “copyleft” activist, and 2016 presidential candidate Lawrence Lessig, who wrote an affidavit for Dotcom that pokes a lot of holes in the case for extraditing him. Lessig notes that the U.S. is lacking a number of specifics in their charges against Dotcom’s alleged infringement, that the U.S. doesn’t at all show that the anonymous users who uploaded a lot of the files are guilty of willful infringement, and that many of the charges have exceeded their statute of limitations for extradition to the U.S., per its treaty with New Zealand.

If he survives the extradition hearing, and then survives the big charges against him, does he get off scot free?

Heavens no! The music and movie industries hit him with an enormous lawsuit in 2014.

Why does Dotcom tweet so much about Edward Snowden?

I know Dotcom talks a lot about Internet freedom. Is he really some kind of activist, or is he more of a scam artist?

This is another question that could easily be its own piece, but I’ll leave you two points for the former question and one for the latter.

Dotcom did create file storage services that are free to use and, in the case of Mega, are encrypted. And he started the so-called “Internet party” in New Zealand, which proposed, among other things, creating a Bitcoin-like cryptocurrency for the entire country and ending New Zealand’s special intelligence-sharing partnership with the U.S.’s National Security Agency. (It was a bust.) These efforts endear him to Internet-freedom activists.

On the other hand, his problems with the U.S. and New Zealand government can be pretty easily explained by the fact that he’s had to deal with lawsuit, the threat of extradition, the seizure of his stuff, and the fact that he was hit with an armed raid. And while he joins forces with the legion of Internet activists who argue that the pro-copyright industry censors and undermines free expression on the Internet, he did have a business model that benefitted from copyright infringement.

You know that episode of The Office where Michael Scott makes a really embarrassing video of himself as a secret agent? Did Dotcom ever do anything like that back in his hacker days?

Yes. Back when he still went by Kimble.

Has he ever written truly awful poetry about someone at the Department of Justice?

I’ve still got a couple minutes. Can you fill my head with random Kim Dotcom facts?

There are so many! My favorite is that for a while, he was the top-rated Call of Duty player in the world. Besides that, let’s just limit it to things that happened in 2014. That year, he: