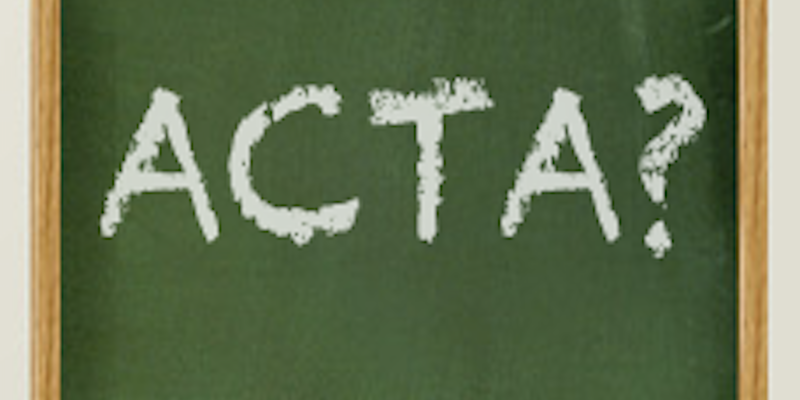 Critics argue that the Anti-Counterfeiting Trade Agreement circumvents democratic systems and that the vague language in the agreement could hinder the rights of Internet users.

Just when you thought the Stop Online Piracy Act (SOPA) and Protect IP Act (PIPA) were dead, a new acronym comes to town to threaten your Internet freedom. It’s called ACTA, and it aims to make intellectual property rights an international issue.

ACTA, which stands for the Anti-Counterfeiting Trade Agreement, is not a bill like SOPA and PIPA were. It’s a trade agreement. Typically, a trade agreement is made when several countries decide to unite and deal with an issue—in this case, intellectual property rights online—in the same way as a group.

While ACTA is a topic of note right now in the aftermath of PIPA, it ‘s nothing new. For four years, various countries have been negotiating the agreement, mostly in secret. Currently, the United States, Canada, South Korea, Morocco, Japan, New Zealand, and Singapore have signed up for ACTA. The European Union, Mexico, and Switzerland all support ACTA and may sign in the future.

Critics argue that the agreement is copyright legislation disguised as a trade agreement in an attempt to circumvent democratic systems. That’s a legitimate point, since ACTA includes criminal sanctions for violating the rules—something very unusual for a trade agreement.

Also problematic to critics is the excessive secrecy that surrounds the agreement. Ordinarily, trade agreements are negotiated in Europe by the European Commission (EC). However, this time the EC was not allowed to have a say about the most controversial part of the bill—Section 4, Article 23, which deals with criminal enforcement.

While opponents have a problem with the secrecy in which the agreement was negotiated, the entirety of ACTA is now out in the open for anyone to read. While the finished agreement is weaker than some of its drafts (one of which concerned “disconnection of Internet access”), some critics are still worried. Even weakened, ACTA remains an agreement instead of a law and would bypass any democratic government’s attempt to legislate it.

Supporters of ACTA—including the pharmaceutical and entertainment industries worldwide—say they will use ACTA to create harsher penalties for creating and distributing counterfeit goods. But much like with SOPA and PIPA, opponents say that the wording of the agreement is so vague that it could be used to clamp down on users’ Internet freedoms.

ACTA could go to a vote in the European Union as soon as Jan. 26. La Quadrature du net has set up a quick way for citizens of the European Union to write to their MP or MEP to convince he or she to oppose the agreement. Some U.S. citizens have put together a petition to the White House to “end ACTA,” but it’s unlikely this method will work since President Obama has already signed the agreement.

However, with seven countries already signed on, it’s unlikely that the European Union’s refusal to sign will at all prevent ACTA from passing. Four years in, there’s hardly a chance of an overturn as there was with SOPA or PIPA.

To that end, Anonymous created this informative, albeit biased video, that breaks down the basics of ACTA.