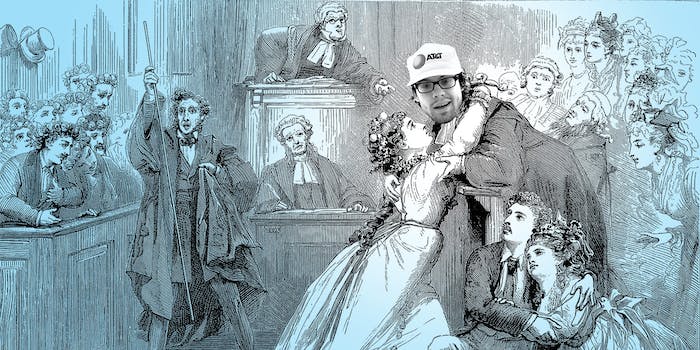 On the scene for hacker Weev’s first and only appeal

Imprisoned hacker Andrew “Weev” Auernheimer wasn’t allowed to attend his own appeal Wednesday. The court was more concerned that he had to be tried in New Jersey.

In Auernheimer’s first and only appeals hearing after being convicted of violating the U.S.’s controversial Computer Fraud and Abuse Act, judges focused on the venue. Weev’s case could set precedent for any state to charge people for Internet-related crimes, because people in any state can get online.

Auernheimer was part of a group of hackers who, in 2010, discovered that an AT&T security breach made it easy to acquire the email address of more than a hundred thousand iPad subscribers, and passed that information to Gawker for an article. In 2012, he was convicted of violating the CFAA, the same law used to prosecute Internet freedom activist Aaron Swartz, who committed suicide before going to trial.

Somewhat surprisingly, the Philadelphia Court of Appeals judges who heard his case were mostly concerned with location, rather than whether what he’d violated the CFAA. Weev, currently serving a 41-month prison sentence, hacked from his native Arkansas; Gawker is based in New York.

But he was charged in New Jersey, where prosecutors successfully argued that by intentionally violating the state’s computer access statute, he committed a CFAA felony, rather than a misdemeanor.

During presentation, the prosecution admitted that none of the addresses Gawker published belong to New Jersey residents, but that Auernheimer had intended to harm residents in all 50 states, making Jersey fair game.

More than a dozen spectators came to the trial solely out of interest in the case and support for Auernheimer. When the prosecutor seemed out of touch—at one point, he argued that Auernheimer “had to download the entire iOs, and did things I don’t even understand”—some visibly shook their heads.

Spirits were positive but muted among Auernheimer’s supporters and counsel after the hearing. “I’m cautiously optimistic for the court to be persuaded by the venue,” Tor Ekeland, one of the lawyers representing Auernheimer, told the Daily Dot. “It was one of the arguments I gave originally; why are we in New Jersey?”

Others on Auernheimer’s side agreed. “I thought it went good, though you never know with these kind of things,” one supporter said.

The court of appeals is finding moves at its own pace, but is expected to come to a decision later this year.

Correction: An earlier version of this story incorrectly stated Auernheimer had previously been scheduled to testify.