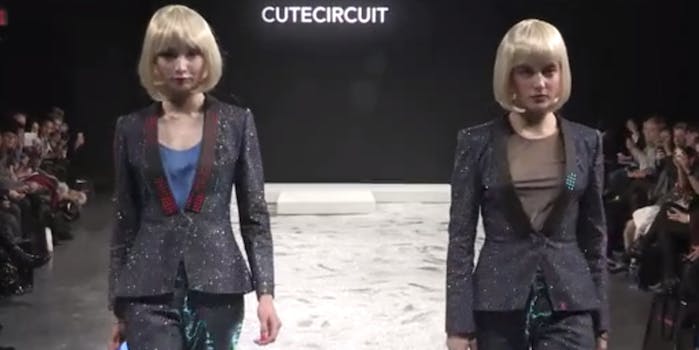 In the days leading up to the release of Apple’s much-anticipated iWatch, “wearable tech” has become something of a buzzword in the fashion world, despite its reputation for being ugly, bulky, and unfashionable. Designers like Tory Burch and Ralph Lauren have already dabbled in the wearables space, and Opening Ceremony and Rebecca Minkoff are also expected to unveil their own wearable tech jewelry pieces during New York Fashion Week (Sept. 4-11.)

Yet in the basement of the Hudson Hotel last Thursday, one label hewed more closely to the definition of wearable tech by showcasing—wait for it—tech you would actually want to wear.

To celebrate its 10th anniversary, the tech fashion company CuteCircuit debuted their spring/summer 2015 ready-to-wear collection. Designed by Francesca Rosella and Ryan Genz, the collection features interactive textiles and smart microfibers, allowing the wearer to interact with the garments by changing their patterns or color via a specialized smartphone app.

Debuting Thursday at the Hudson Hotel in midtown Manhattan, the CuteCircuit 2015 RTW collection featured everything from menswear-inspired structured blazers with plunging necklines and LED-embossed lapels to delicate, feminine dresses with full skirts equipped with movement sensors. One model carried a clutch with the word “LOVE” flashing in LEDs.

Unlike most tech-infused fashion, which can look bulky and unwieldy, the textiles in CuteCircuit’s line look lightweight, and the electronics are seamlessly integrated into the fabric.

As Rosella explained in an introduction to the show, the CuteCircuit collection envisions a world in which updating your wardrobe will be as simple as downloading an app online. “In our ideal wardrobe, we can have just a few pieces and then you can just download new patterns,” she said. “So you have one skirt, but you actually have a thousand pieces.”

Launched in 2004, CuteCircuit has also created the Hug Shirt, a shirt that uses Bluetooth and motion sensor technology to allow the wearer to send and receive hugs from a distance, as well as the Twitter dress, an LED-embedded, USB-rechargeable garment that displays tweets in real time. The company has also designed costumes for pop stars Nicole Scherzinger and Katy Perry, including an evening dress Perry wore to the Met Ball containing 3000 microLEDs.