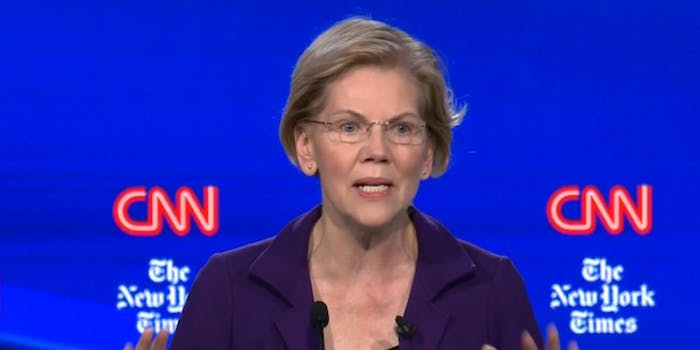 She also defended her wealth tax.

Sen. Elizabeth Warren (D-Mass.) said she did not “have a beef with billionaires” after she was pushed by a fellow 2020 Democratic presidential hopeful about her extreme wealth tax on Tuesday night.

The remarks from Warren came after former Rep. Beto O’Rourke pushed her about her plan to tax extreme wealth during the fourth 2020 Democratic debate on Tuesday night.

“Sometimes I think Senator Warren is more focused on being punitive, or pitting some part of the country against the other instead of lifting people up and making sure this country comes together around those solutions,” O’Rourke said, adding: “She has yet to describe her tax plan.”

“So I’m really shocked at the notion that anyone thinks I’m punitive. Look I don’t have a beef with billionaires. My problem is–you made a fortune in America, you had a great idea, you got out there and worked for it, good for you—but you built that fortune in America. I guarantee you built that fortune in part using workers all of us help pay to educate. You built it in part getting your goods to market on roads and bridges all of us helped pay for. You built it at least in part protected by police and firefighters all of us helped pay the salaries for.”

“And all I’m saying is, you make it to the top–the top one-tenth of one percent–then pitch in two cents so every other kid in America has a chance to make it.”

"I don't have a beef with billionaires" is peak Warren. She's been riffing on this ideas — that the wealthy owe back — for a long time now. That if you're rich because of trucks, you got there on roads, etc. pic.twitter.com/grlYPfuVod

Warren also faced pushback from Sen. Amy Klobuchar (D-Minn.), who said “no one on this stage” wants to protect billionaires, adding that Warren’s idea was “not the only idea.”

Klobuchar and Warren face-off over how to roll out a proposed billionaire tax #DemocraticDebate pic.twitter.com/iJSv3UTDof