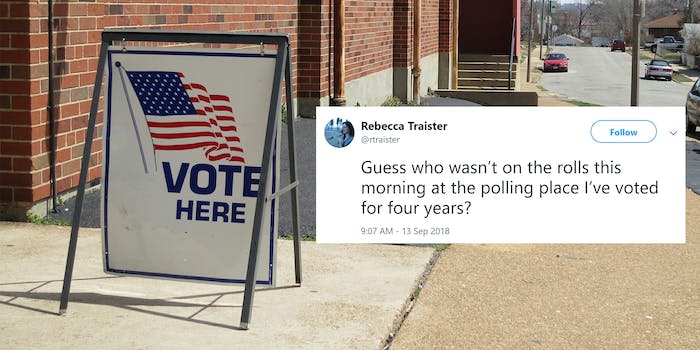 Something's up with today's primary.

Several New York voters reported Thursday that they were not on the voter rolls at their voting locations during today’s Democratic primary for governor despite being registered voters and not having changed addresses since the last election.

Registered Democrats in Brooklyn, Washington Heights, and Pelham, New York reported that their names were missing from voter rolls in their voting locations, despite having voted there before and having made no changes in their registration or address.

Some individuals who have reported difficulties voting also expressed their plans to vote for Cynthia Nixon for governor. Nixon’s progressive stance on issues like single-payer healthcare and marijuana legalization make her an appealing candidate and a formidable alternative to Governor Andrew Cuomo.

Guess who wasn’t on the rolls this morning at the polling place I’ve voted for four years?

Writer Rebecca Traister tweeted about her voting experience, saying that she had to cast an affidavit ballot—essentially an absentee ballot for those who are present and registered but encounter problems voting.

Traister said her neighbor had experienced the same thing, as did journalist Lydia Polgreen.

James Ryan, a professor at New York University, tweeted that both he and his wife were not on the voter rolls at their polling place in Washington Heights. Ryan said that he had planned on voting for progressive candidates Nixon, Jumaane Williams, and Zephyr Teachout in today’s elections.

Jennifer Merritt said that several people in her hometown of Pelham had voted by affidavit ballot because their names had disappeared from the rolls at the polling places where they’re voted before.

Three of us just in my line weren't on the voter rolls at my polling place (in Clinton Hill). This is the first affidavit ballot I've had to cast there. WTAF indeed.

Same for me! Very weird.

Writer Elon Green reported having trouble at the polls, too:

Twitter user @adrianeisoverit reported that she couldn’t vote in today’s primary because her registration was changed to Republican.

.@NYCMayor’s son Dante was forced to vote by affidavit ballot — despite showing up at his polling place with his voting card from the Board of Elections, he wasn’t on the rolls.

Throughout the day, more people reported having problems voting in today’s primaries.

Checked my voter registration online. According to the state, I’m not anything. I’m a registered independent. So to recap, the poll workers say I’m a member of the Reform Party, the Democrats say I’m a Democrat, and the state says I’m an independent. Cool. pic.twitter.com/cjGCqTasNd

….Aaaaaand after a bunch of phone calls and affidavit nonsense, I managed to get my #NYPrimary vote in. Hoping Cuomo and Teachout can get along…. #PrimaryDay

Myself and a classmate both had to vote provisionally this morning. We're law students so, you know, we were both very on top of following arbitrary bureaucratic rules to register. Truly a mystery

This is not the first time New Yorkers have experienced serious problems casting their votes. In 2016, widespread voter roll purges prompted a lawsuit by the good government group Common Cause and Eric Schneiderman, the former Attorney General of New York.

The New York Board of Elections did not comment on the situation by press time.