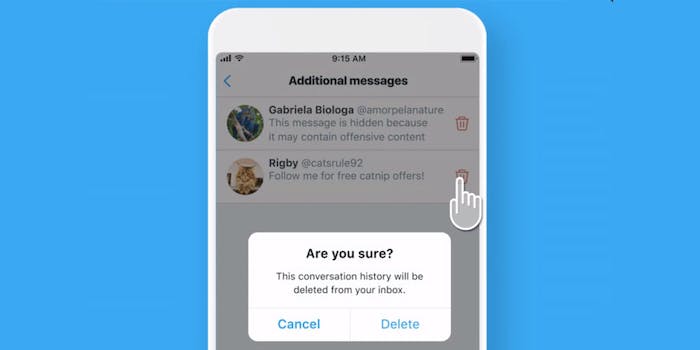 A filter would keep unwanted messages 'out of sight, out of mind.'

The tech company revealed news of the experimental feature in a tweet on Thursday.

“Unwanted messages aren’t fun,” the company said. “So we’re testing a filter in your DM requests to keep those out of sight, out of mind.”

Unwanted messages aren’t fun. So we’re testing a filter in your DM requests to keep those out of sight, out of mind. pic.twitter.com/Sg5idjdeVv

A GIF accompanying the tweet shows a new submenu under the “message requests” section located in a user’s direct messages. Users can click through to read or delete “additional messages, including those that may contain offensive content.”

While Twitter has provided few details, the system is potentially based off of a similar flagging feature that currently hides tweet replies based on keywords.

Twitter users responded to the news as they normally do when a new feature is revealed: with jokes and repeated requests for an edit button.

How about you make an edit button first

Like many of Twitter’s test features, it is possible that the function will not become integrated into the main platform. However, given the prevalence of abuse on the site, it’s likely that the feature will eventually be used.

The tech company is also currently testing a snooze button for push notifications.