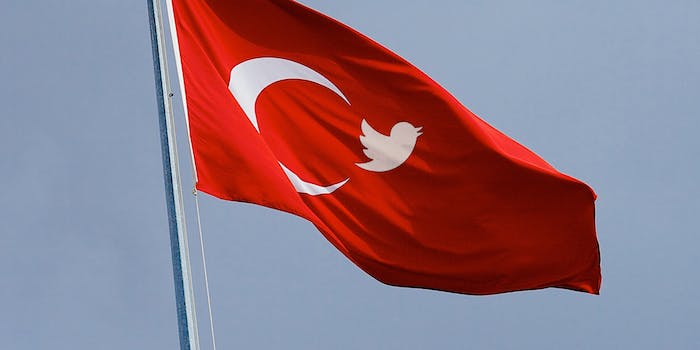 Twitter obey's Turkey's censorship requests, but it can also listen to reason.

It’s no secret that Turkey has recently ramped up its censorship of all kinds of online content that the government doesn’t like. It’s blocked YouTube to censor evidence of corruption, WordPress for what may have been a clerical or automated error, all sorts of nominally atheist and anti-Muslim content online, and Twitter for a wide range of reasons.

Just two weeks ago, the country endured a tragedy. The leftist group DHKP/C took a public prosecutor hostage and posted photos of him with a gun to his head to social media sites. Neither the prosecutor nor the gunmen survived, and Turkey’s Internet censorship machine quickly took hold. A court ordered a ban on 166 URLs related to the incident. Twitter was among the biggest recipients of that ban, which named 54 specific tweets and 10 entire users accounts, all of which were blocked on April 3.

Three days later, I unwittingly joined them. One of those censored tweets came from the newspaper Millyet’s story on the hostage situation, and it included a graphic image—already iconic to people who followed the story—of the prosecutor with a gun to his head. So I tweeted a screengrab of that tweet to a fellow sociologist who also researches censorship on social media.

Their email, sent to me on April 9, reads:

Please note that the demand received is regarding the image within the Tweet, and thus the commentary in your Tweet associated with the image would not be withheld under this demand if re-posted on Twitter. Due to the structure of Tweets, we are currently unable to withhold only the image in Turkey without affecting the associated commentary of the Tweet.

Based on the concerning nature of these demands, we have filed an objection to this order in Turkish court on freedom of expression and other grounds. If the court accepts our objection we will reinstate the content in Turkey, as soon as possible.

There are a number of problems here. As frequently stated by activist law professors Yaman Akdeniz and Kerem Alt?parmak—who successfully reversed the ban on Twitter in April 2014—Twitter, as a U.S. company, has no obligation to abide by Turkish court orders.

The country’s censorship does not distinguish intent or the source. Included among those 54 tweets withheld by the latest decision, seven users were foreign citizens tweeting in English or Spanish. Twenty-two belong to the news media accounts reporting about the hostage situation. Five did not even directly share the photo, but thanks to Twitter’s Cards feature, their link to an article made it visible.

My tweet above was merely reporting this absurdity. So I fought back. These court orders are clearly politically driven, and they clearly violate users’ freedom of speech. As the Electronic Frontier Foundation argues, this makes Twitter “complicit in Turkey’s long history of silencing dissent.”

I wrote my concerns to Twitter’s legal team. Saturday, they responded.

We have received and reviewed your message and your request for unwithholding of the Tweet at this URL:

Given the nature of your research and the additional context, at this time, we have unwithheld your Tweet in Turkey. We will inform you if we hear again from Turkish authorities regarding the Tweet.

This may seem like a win, but it is definitely a small one. There are still more than 80 accounts and more than 2,000 tweets withheld in Turkey.

Besides, Twitter’s decision to un-withhold my tweet sounds like a privilege they chose to grant to a researcher, not a political right to which all Internet users should be entitled. It will take a lot of uncensoring until every Twitter user from Turkey can enjoy the same rights as users from rest of the world.

This would be possible only if Twitter takes a firm stance against Turkey’s political pressure, and stops the policy of “censoring to avoid a ban.”

As a private company, Twitter can choose strategies which return the highest profit, and bowing down to Turkish requests likely follows that path. But in the long run, users’ trust can only be gained if the company keeps its promise of respecting user privacy and becoming, as CEO Dick Costolo once promised, the “free-speech wing of the free-speech party.”

Photo via Nico Kaiser/Flickr (CC BY 2.0) | Remix by Jason Reed