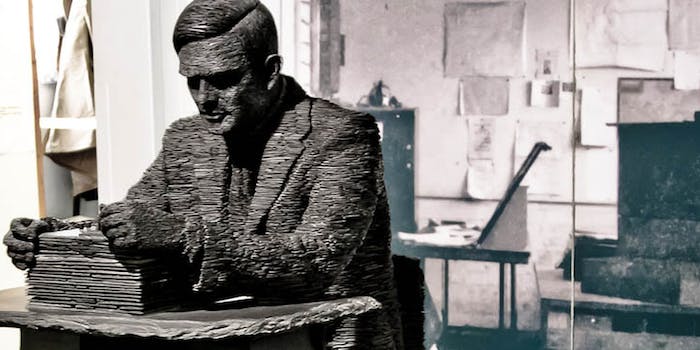 At the Bonhams auction house in New York City, an unnamed bidder on Tuesday just bought a significant piece of scientific history. A handwritten notebook belonging to World War II codebreaker Alan Turing was sold for just over $1 million.

The notebook dates back to 1942 and contains writings from Turing’s time at Bletchley Park, the central site of the United Kingdom‘s Government Code and Cypher School. The notebook contains, among other things, the codebreaker’s foundations of mathematical notation and computer science.

Fellow mathematician and friend Robin Gandy was entrusted with Turing’s notes upon Turig’s untimely death in 1954. Gandy donated the majority of Turing’s work to the Archive Centre at King’s College, Cambridge in 1977. But he held on to the notebook because of a private, personal message scrawled in the central pages. The notebook was found among Gandy’s personal belongings after his death in 1995.

Turing, often referred to as the father of modern computing and artificial intelligence, is perhaps best known for his work in cracking the code used by the Germans with their Enigma machines. One of the Enigma coding machines was sold at the same auction as Turing’s notebook, fetching $269,000.

Though his contributions to the war effort were vital and his legacy lives on in computer science, Turing’s life came to an abrupt end. He was convicted of gross indecency in 1952 for having a sexual relationship with a man. Turing was chemically castrated. Two years later, he died of cyanide poisoning in what is believed to be a suicide. Turing was granted a posthumous pardon in 2013.