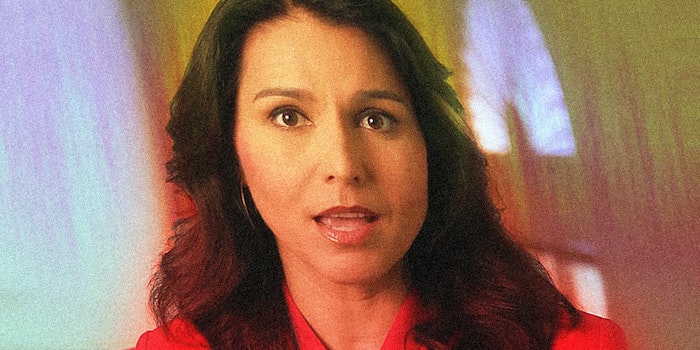 Rep. Tulsi Gabbard (D-Hawaii) is (probably) not a Russian asset, but she has an unorthodox set of political loyalties that are making her endlessly vexing to both parties

The most recent bout of fury against the Hawaiian congresswoman erupted after a tense exchange with Sen. Kamala Harris (D-Calif) during a Democratic primary debate. Gabbard hammered Harris’ record as a prosecutor saying, “Senator Harris says she’s proud of her record as a prosecutor and that she’ll be a prosecutor president. But I’m deeply concerned about this record.”

Following the debate, Ian Sams, Harris’ press secretary, tweeted out stories linking Gabbard to Russian propaganda, reigniting distaste and distrust for Gabbard from all over the American political landscape.

More fuel was added to the fire due to a recent spat with Hillary Clinton. On former Obama advisor David Plouffe’s podcast, Clinton said, “I’m not making any predictions, but I think they’ve got their eye on somebody who is currently in the Democratic primary and are grooming her to be the third-party candidate. She’s the favorite of the Russians.”

Though Clinton didn’t explicitly name Gabbard, Tulsi fired back via social media, calling her a “warmonger.” The surrogates and supporters of the two women have been going at it ever since. This back and forth has given continued relevance to Gabbard, who is polling around 1% in the Democratic primary.

Great! Thank you @HillaryClinton. You, the queen of warmongers, embodiment of corruption, and personification of the rot that has sickened the Democratic Party for so long, have finally come out from behind the curtain. From the day I announced my candidacy, there has been a …

As Gabbard has drawn the ire and suspicion of major Democratic figures, she has become the target of #resistance Twitter mainstays like Claude Taylor and Louise Mensch. These self-appointed experts wile away the days amplifying Russiagate conspiracy theories in exchange for Twitter faves and clearly view Gabbard as attractive fodder for their Twitter threads.

Is @TulsiGabbard a Russian asset is only a dumb fight until she runs third party. https://t.co/U3FkE7I6Ma

Meanwhile, Gabbard herself is fanning the flames through what she calls outreach, appearing on right-wing shows like Tucker Carlson’s, and sitting for interviews with Breitbart.

Much of what is said about Gabbard is outlandish, but a close look at her foreign and domestic policy reveals why partisans of both parties find her so vexing and also so interesting.

The key to understanding Gabbard is understanding where her loyalties lie. It wouldn’t be fair to call her a foreign asset, but Gabbard simply has a different set of backers than almost all American politicians. This unique coalition of supporters manages to make everyone in mainstream U.S. politics mad at her for one reason or another.

Much of the evidence for Gabbard’s alleged affinity for Russia can actually be traced to the fact that she is a supporter of the Indian far-right. Specifically, Gabbard has ties to Rashtriya Swayamsevak Sangh (RSS), a nationalist organization known for being anti-Muslim, with direct ties to hardline Indian leader Narendra Modi.

Gabbard is the first Hindu member of Congress, but her support for Modi goes beyond spiritual affinity. Modi’s party has raised funds for Gabbard and she has opposed a resolution criticizing Modi’s failure to protect “the rights and freedoms of religious minorities,” dismissing violence against Muslims as “misinformation.”

Here, Gabbard has drawn the ire of the left for siding with Modi’s authoritarian regime. Anti-imperialist writers with a global perspective, like those who write at Jacobin, Current Affairs, or the Intercept, regularly criticize this position.

Nooooo Krystal! Tulsi isn’t actually anti-war and calls herself a ‘hawk’ on the war on terror. And yes she called out the Saudis – good – but not Sisi or Modi who she has lavished praise on. You don’t have to defend Tulsi to dislike Hillary. It’s not either/or.

Imagine thinking Tulsi Gabbard is a Russian asset when she's actually a Modi plant, which is much much worse

Modi is not the only authoritarian figure for whom Gabbard has expressed support. She is also a booster of Syrian leader Bashar al-Assad. Gabbard met with Assad and has offered legislative support of the Syrian leader. She voted to restrict the resettlement of Syrian refugees, voted against condemning the Assad regime’s war crimes, and stoked doubt regarding the regime’s responsibility for chemical weapons attacks.

While the same left flank opposes her here as well, she also has drawn the ire of right-wingers who would like to see Assad deposed and a U.S.-friendly government installed.

.@TulsiGabbard’s obsequiousness towards Assad is nauseating. She is terrible on foreign policy in general. But where is the evidence that she is a Russian agent? Baseless accusations help Russian propaganda by discrediting those of us trying to undermine Russian propaganda.

Tulsi Gabbard is an Assad-apologist, a guy who gases and murders children. https://t.co/5zT7xcVZrJ

Some Clinton loyalists are also hawkish toward Syria because this was the position that Hillary Clinton took as secretary of state.

Thus, the center-left is mad at her too, as this is a long-standing point of contention between Gabbard and Clinton.

Damn, Biden just wiped the floor with Tulsi Gabbard. The only way to make this worse for her is if he stands really close and says she smells nice for an Assad apologist.

The Tulsi kerfuffle will be short-lived.

Which means I need to hurry before it ends!

In three tweets she called Hillary worse than she has ever called Assad or Putin.

If Russian-compromised-trump and 3rd-Party-Menace-Jill-Stein had a child, it would be Tulsi Gabbard.

With her position on Syria, Gabbard may have successfully angered every major political formation in the U.S.

The Hawaiian politician’s connections to Syrian leadership have stirred so much controversy that she has included a “Reports on Chemical Attacks in Syria” section on her 2020 presidential campaign page. In this section, she writes, “I believe that we should all carefully look at the evidence before coming to any conclusions as to whether or not al-Qaeda or the Syrian government were responsible for this particular attack.”

As if this weren’t controversial enough, the congresswoman’s affinity for nationalistic authoritarian figures coincides with what some view as an anti-Muslim streak. She has the Republican tic of demanding acts of terror in the Middle East be called “Islamic extremism” and “radical Islam.”

This has drawn odd fans to her, including Steve Bannon, who set up a meeting between Gabbard and President-elect Donald Trump at Trump Tower.

Gabbard’s stance here has made her a favorite on Fox News and drawn criticism from left-leaning publications as well as prominent Muslim writers and intellectuals. An article in the Week speculated that “there may be some truth” to the claim that her foreign policy is “driven by Islamophobia.”

The congresswoman’s fondness for Assad is at the heart of why she is sometimes accused of being a Russian asset. While the stance of supporting Assad in Syria while opposing ISIS has been what critics have to link her to Russia, there are other countries, like India, that oppose ISIS while more or less supporting Assad.

Confusing Gabbard’s allegiance with India as an alignment with Russia is somewhat understandable, as they are both BRIC (Brazil, Russia, India, China) nations, and sometimes share foreign policy goals as emerging economies.

While Gabbard’s foreign policy may seem strange to some Americans, if you recognize that she is backed by Hindu nationalists and Modi supporters at home and abroad, her positions become pretty clear. As the Intercept reported, she receives a ton of money from American Hindus as a reward for her unwavering support of the interests of India’s ruling class.

The tens of thousands of dollars she receives from them may be what is keeping her in office and funding her national ambitions.

Domestically, Gabbard has also managed to strike a balance that has also angered people from every political affiliation. Gabbard’s father, Mike, is also a politician and has a long record of social conservatism anti-LGBTQ activism. Though Gabbard has changed her position in recent years, as recently as 2004 she was expressing similar views. She previously supported an amendment defining marriage as between a man and a woman, used the phrase “homosexual extremists” to describe her political opponents, and was once pro-life.

But as recently as 2015 she noted her personal views have not changed. Even when apologizing to LGBTQ activists in 2012, she still careful to note, “that’s not [her] lifestyle.”

This has drawn the ire of liberals who view unequivocal support of the LGBTQ community and a woman’s right to choose as litmus test issues for Democrats.

.@TulsiGabbard's response clearly shows how very little time she has spent to understand situations around abortion. She chose to stigmatize women and medical procedures rather than ask why politicians should make critical and fundamental decisions rather than women. Unacceptable

Despite her strange socially conservative streak, Gabbard famously endorsed Sen. Bernie Sanders (I-Vt.) in 2016 and supports his economic program with policies like Medicare for all and free college. Her early support of Sanders angered the right and center. This is the root of much of the establishment Democratic distaste for the congresswoman, as she became a favorite punching bag of Clintonites who are still angry at Sanders.

(2) Bernie Sanders is a legit foreign asset according to the Mueller Report.

Tonight, Bernie Sanders defended Tulsi Gabbard with more swiftness and conviction than at any point for Hillary Clinton who was the democratic nominee.

As with her foreign policy, Gabbard’s unorthodox domestic policy can be traced back to particular supporters who have backed her since the beginning of her career.

As a child, Gabbard was educated under the auspices of a guru is known for running his adherents for local political office in Hawaii. Some in Hawaii view Gabbard’s ascendance as the product of Chris Butler’s longtime attempt to gain a foothold in state politics with a group called Independents for Godly Government (I.G.G). Her domestic policy certainly aligns with the views of Butler and the I.G.G.

Though Gabbard’s political positions are fairly easily explained if you look at her donors and supporters at home and abroad, they don’t fit into any clear political box. While she is most likely not a Russian asset, she sure does know how to make all sides of U.S. politics angry better than anybody else.