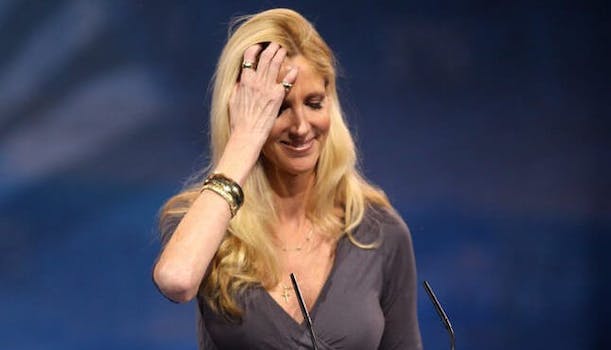 That's one point for Cat Turd 2, none for Coulter.

Presidential hopeful Rep. Tulsi Gabbard (D-Hawaii) surprised a few by voting with 231 of her Democratic colleagues on rules for the public phase of an impeachment inquiry into President Donald Trump.

Probably most surprised was far-right columnist Ann Coulter. Coulter seems to have been operating under the mistaken belief that Gabbard is in the Senate, not the House.

It all began when @catturd2 tweeted, “For all you foolish Tulsi Gabbard fans … She just voted for an illegal impeachment coup,” and likened Gabbard to House Majority Leader Nancy Pelosi (D-Calif.).

Conservatives have come to love Gabbard in recent months, and Cat Turd 2 was trying to dissuade them of their fandom.

Upon reading this tweet, Coulter swooped in with her editor’s pen for a stiffly-worded correction. “No she didn’t. Tulsi is a SENATOR, meaning she’s in the SENATE and doesn’t vote on HOUSE resolutions,” she tweeted. 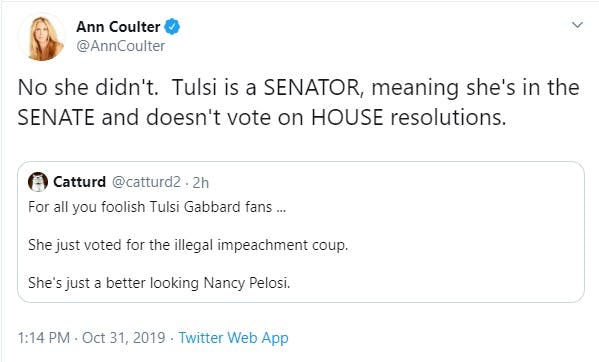 Twitter did not waste a millisecond pointing out that Gabbard is not, nor has she ever been, in the Senate.

“In fairness to Ann Coulter, Google takes *over half a second* to tell you that this isn’t true,” tweeted one snarkster.

“Today I am, for no reason at all, thinking about how Ann Coult*r once wrote a column about how *I* needed to learn how to use google,” National Law Journal reporter Jacqueline Thomsen said.

Many people were deeply amused that Coulter was losing an argument with someone who calls themselves “Cat Turd 2.” The feline defecator in question even got in on the fun, tweeting laughingly that thousands of people were responding to their tweet to incorrectly correct them about which branch of Congress Gabbard is in. (Ann, in case you’re reading this: It’s the House.)

"Lebron James is a great quarterback."

Ann bricking an attempted thundering dunk on “Cat Turd 2” is something you love to see pic.twitter.com/xXbC6XcEA9

Right into my veins. pic.twitter.com/MQuCx6hfS7

Everything about this is amazing. Ann attempts to dunk on Cat Turd 2 (the first Cat Turd was taken?) and bricks her dunk in a spectacular fashion. https://t.co/42t1FhAGfQ

People don’t pay Ann Coulter’s $15-20K speaker’s fee for her political expertise. They are paying for the racism. pic.twitter.com/pctFEtbe9s

Ann Coulter @AnnCoulter apparently auditioning for a spot in the @realDonaldTrump administration with an epic fail. https://t.co/6u9m4jsVu9

I’m pretty sure she has no friends to call and tell her.

For others, it merely confirmed everything they already know about the pundit.

Aaron Blake of the Washington Post wondered if Coulter had mixed Gabbard up with Sen. Mazie Hirono (D-Hawaii). After all, one is 38 and the other 71; and one is Samoan-American and the other Japanese American. But they are both female racial minorities from Hawaii, so it’s probably super easy for someone like Coulter to get them mixed up.

A few did come to Coulter’s defense. (Okay, not really.)

This is what happens when your brain is 99% racism.

Coulter herself finally weighed in after a few hours, tweeting, “This should make international headlines. Coulter Makes Mistake! First Ever!” She wasn’t done there.

She SHOULD be in the senate. https://t.co/Z2qqzaEj3N

Well that doesn’t make it true.