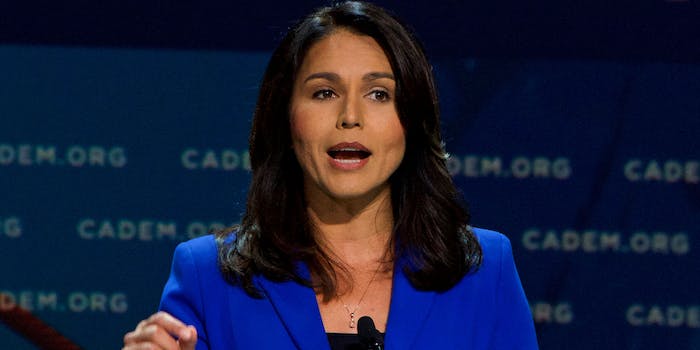 And then there was Rep. Tulsi Gabbard (D-Hawaii).

Gabbard’s candidacy has been both an enigma and a fascination. She hasn’t had the kind of breakout moments like Mayor Pete Buttigieg, or faded away like Rep. Eric Swalwell. But she’s remained, all while facing accusations of cozying up to dictators and being a new front in Russian interference election.

The last —thatcould be possible she is an Angelina Jolie-esque SALT-type sleeper agent—has made for some interesting bedfellows.

Because while conservatives don’t tend to support any Democrat, the current had of their party also could (could, we’re saying could) be a similar kind of pro-Putin agent: President Donald Trump.

From withdrawal in Syria to more free-market solutions to healthcare, conservative commentators and outlets are watching and have found they really, really, really like Tulsi.

Gabbard could beat Trump in a landslide. She'd win all of the anti-Trump votes, plus a lot of the people in the middle, and probably even some conservatives. She's also young and attractive. But the Dems will never nominate her because she isn't excited enough about abortion.

ICYMI: Tulsi Gabbard's definitive "no more regime change" statement was one of the best moments of the #DemDebate https://t.co/urKWOWjbSb

I declare Tulsi the winner of the debate https://t.co/urKWOWjbSb

Tulsi also extended an olive branch to the conservative fans of her campaign, noting that she did not believe Trump supporters to be “deplorables,” the phrase Hillary Clinton used to describe the most festering parts of the far-right, instead calling them “fellow Americans.”

My only takeaway from last night's debate is that my years-long crush on Tulsi Gabbard is growing.

She's not only gorgeous, she's also smart and decent.

Gabbard is routinely considered to be the most pro-Russia candidate in the races, even using their language to describe American intervention in Syria as a “regime-change” war.

While supporters of Trump tend to deny he’s got any untoward relation with Moscow, that supporters of the president flock to Gabbard says… something.