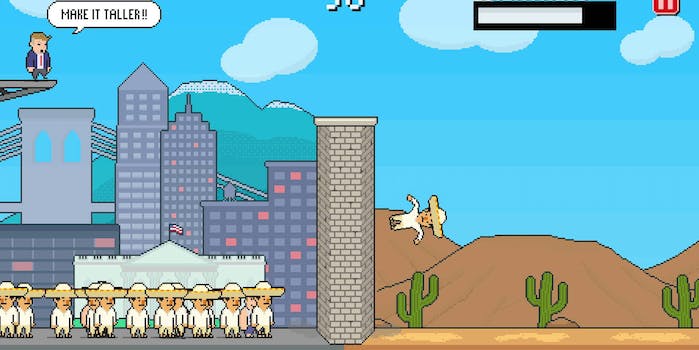 Everyday Arcade says it'll share the games on its own.

A game development company is going independent after it says Apple vetoed its political satire games.

Everyday Arcade, which launched this week, posted on Medium that Apple wouldn’t approve its games about the 2016 election because they’re offensive. The first three games from the ongoing series called “GOP Arcade” are indeed eyebrow-raising. Trump Toss makes players throw stereotyped Mexican characters over an ever-rising border between the U.S. and Mexico. Good Guy with a Gun puts the player in the role of a gun salesman selling guns to anyone who doesn’t have evil glowing red eyes.

And yes, that includes children. 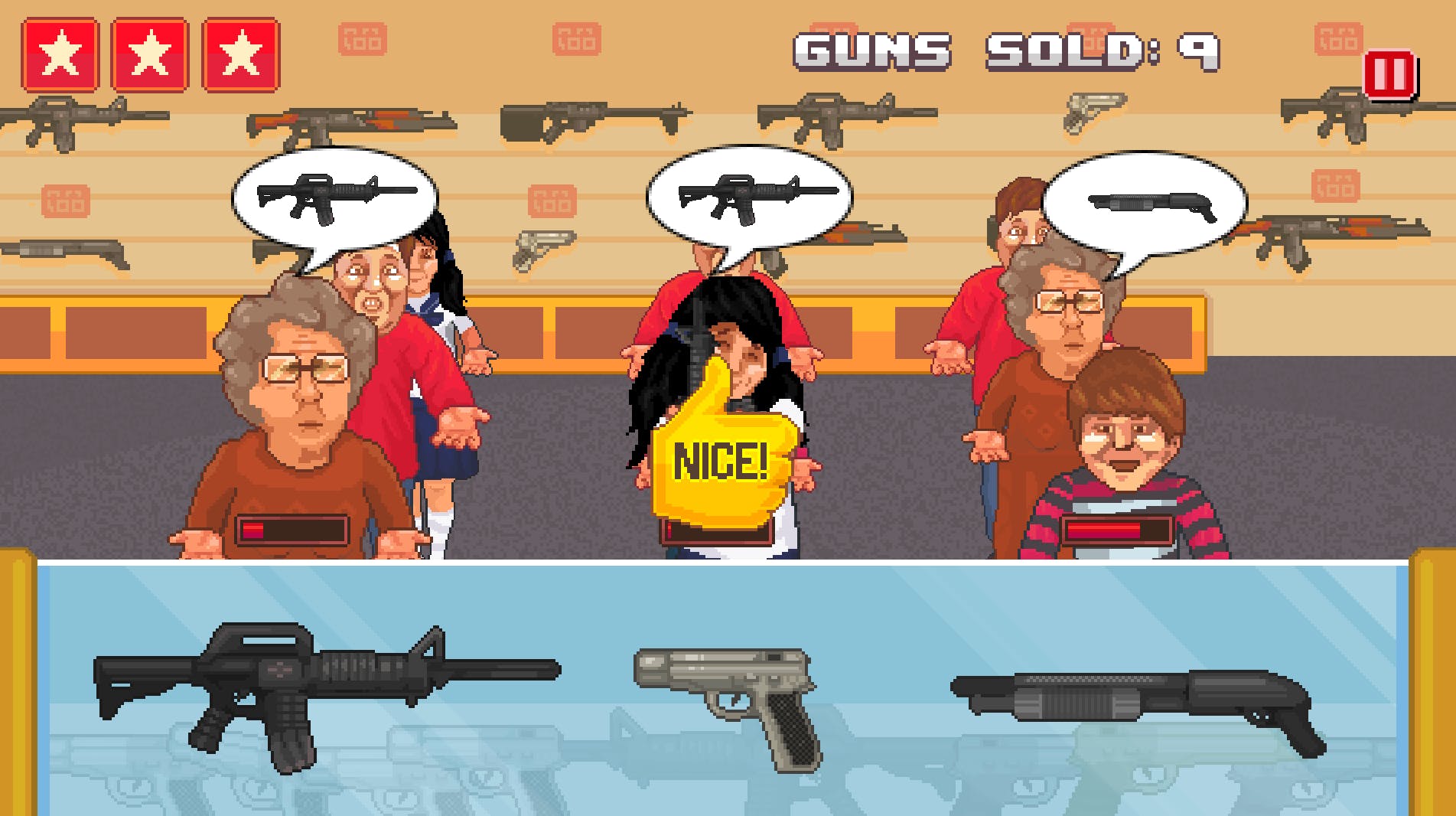 The third one is Bomb the Right Place, where the player tries to bomb locations in the Middle East. However, the map is unlabeled, so it’s up to the player to know where Cairo, Baghdad or Kabul are. Given that half of Americans couldn’t identify Syria on a map in 2013, it’s no surprise the game is tough. Luckily, even if the player messes up, they still technically “win.”

Game developer Mike Lacher told the Daily Dot the games can be considered offensive if someone takes them too seriously. But, he said they’re clearly identified as satire, using over-the-top stereotypes to poke fun at the rhetoric that’s become a staple in Trump’s presidential campaign. He said putting these talking points in game form encourages players to step back and really think about the messages they’re receiving.

“We’d like people to look at these issues in a different way,” Lacher said. “You get caught up in the news cycle that everything becomes so serious, [but] some of this stuff is ridiculous.” 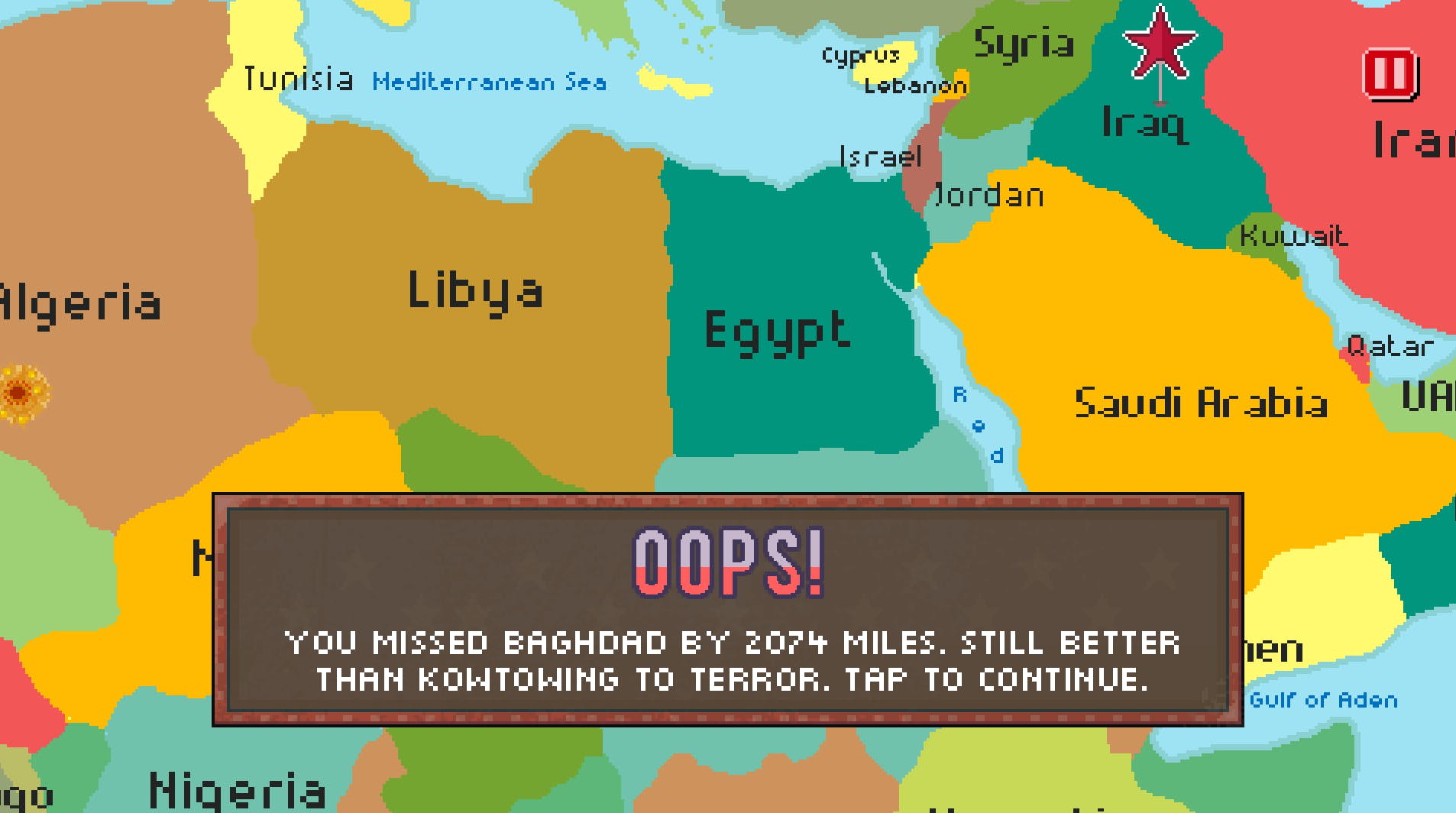 Lacher and his co-creators are no strangers to controversial games. They’ve built online games about drunk shopping and creeping friends out with comments on their old Instagram photos. However, this is the first time they’ve delved into the election.

Lacher said Apple rejected the games because they targeted Middle Eastern countries and stereotyped Mexicans. The Daily Dot reached out to Apple for comment, but has not received a reply.

Apple has already approved games that can be considered offensive toward immigrants, Mexicans, and Muslims. Soledad features a sombrero-wearing Mexican stereotype stuck in the Antarctic, while ImmigRUN: The immigrant game is about a refugee fleeing through Europe. There’s even a trivia game in the App Store called Illegal Immigration: A Game, which includes the phrase “illegals are criminals who threaten U.S. security.” 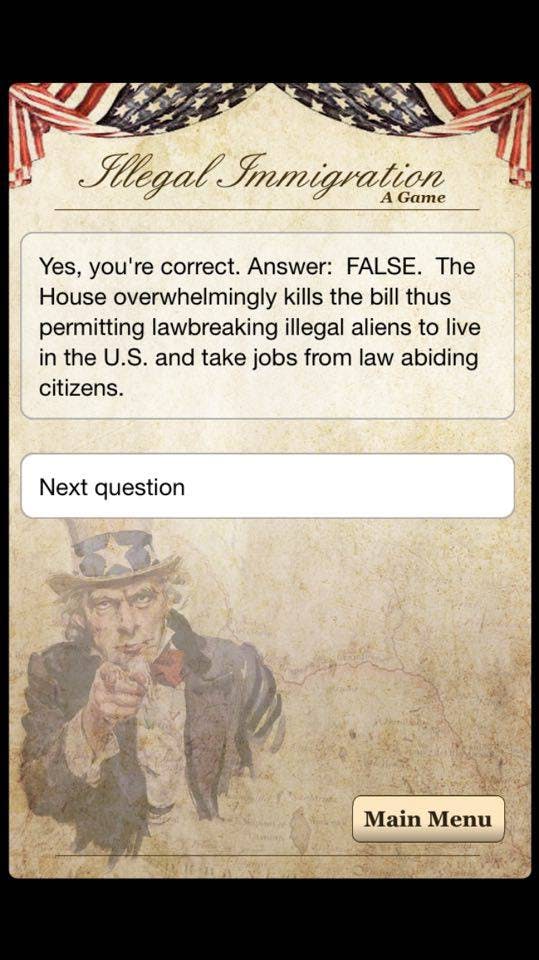 According to the App Store Review Guidelines, Apple will not accept games that are violent, offensive, gross or mean-spirited against other people. Still, it’s clearly more on a case-by-case basis than a uniform policy. For example, Apple rejected The Binding of Isaac in February for depicting violence against children, even though it’s commentary on the horrors of child abuse. However, there’s a game in the App Store called Beat the Bully! where you punch a kid in front of a school.

And even though Apple said it doesn’t want games depicting violence against public figures, there are games where players can punch or defecate on Trump, or build a wall using the heads of his opponents. “The initial feedback they gave us was a large number of people would be offended by the games. People could take them as offensive since there’s stuff around public figures, “Lacher said. “We replied with a huge list of Trump games.”

Apple does have an exemption for “professional political satirists and humorists.” This largely came after Apple rejected a political cartoon app from Pulitzer Prize-winning satirist Mark Fiore in 2010, reversing the decision after public outcry.

Lacher is a regular contributor to McSweeney’s, including the 2012 book The McSweeney’s Book of Politics and Musicals, so he figured he’d qualify as a satirist. He didn’t, but that’s not the first time that’s happened. Last year, Apple rejected a satire app that mocked politicians who voted against reproductive rights, even though it was from “The Daily Show” co-creator Lizz Winstead. 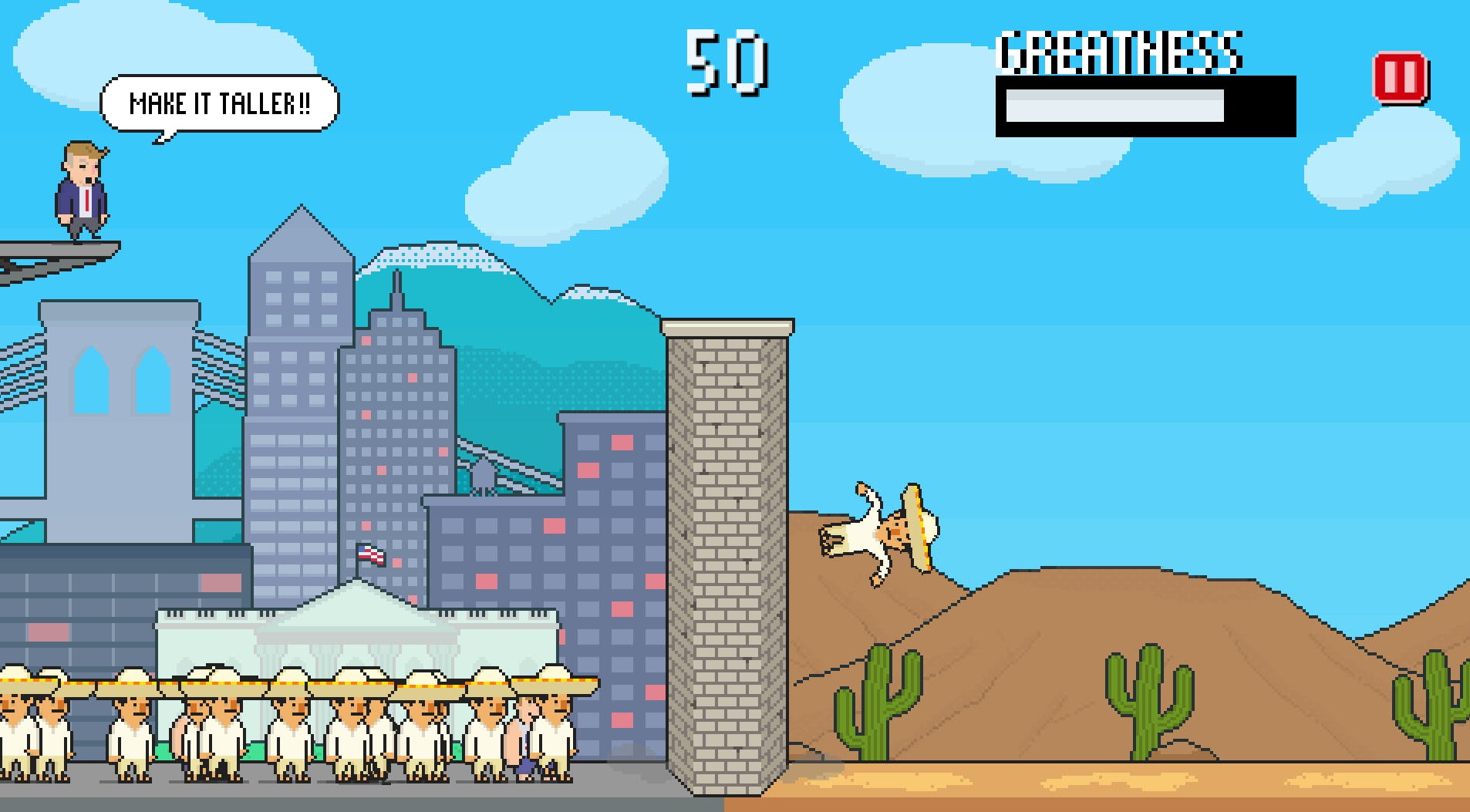 Everyday Arcade has chosen to publish the games for free on its website, where it’s working on more games in the ongoing series. Lacher said the next one, called Science Fighter, is a platform game where the player battles scientists. They also have games in the works about transgender bathrooms and SuperPACs. He hopes the games help people laugh as much as learn, as satire should.

“I think satire has a tremendous power because it takes a different angle, rather than just the straightforward shouting,” Lacher said. “The great thing they do is they’re able to make an argument in a way that feels more compelling and entertaining.”