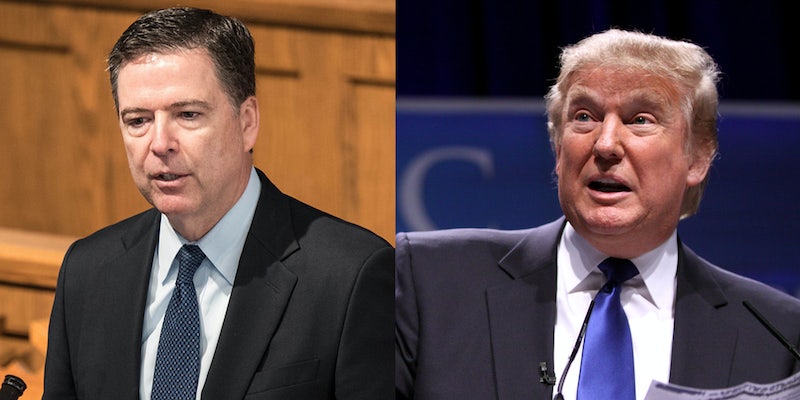 The pee tape lives on.

Former FBI Director James Comey claims in his upcoming book that President Donald Trump asked him to investigate the so-called “pee tape,” according to a new report.

Trump wanted Comey to investigate the tape—which was mentioned in the Steele dossier and allegedly shows Trump paying prostitutes to pee on a bed in Russia—to reassure First Lady Melania Trump, the New York Post reports.

The dossier said the tape was collected by a Russian spy and was being kept as a way to blackmail Trump.

“He brought up what he called the ‘golden showers thing’ … adding that it bothered him if there was ‘even a one percent chance’ his wife, Melania, thought it was true,” Comey wrote, according to an excerpt published by the Post. “He just rolled on, unprompted, explaining why it couldn’t possibly be true, ending by saying he was thinking of asking me to investigate the allegation to prove it was a lie. I said it was up to him.”

The former FBI director says he told the president that if he investigated the “pee tape” it would “create a narrative that we were investigating him personally.”

Comey also writes that he wondered why Melania Trump may think it was true, according to the Post.

This isn’t the first time Comey has caused a stir surrounding the “pee tape.” During his testimony before Congress last June, the former FBI director, who was abruptly fired by Trump last year, did not comment on the existence of the dossier–leading everyone to clamor about the tape.

Comey’s book, A Higher Loyalty: Truth, Lies, and Leadership, is scheduled to be released next week. He will also be interviewed by ABC on Sunday.

You can read all of the New York Post‘s report here.