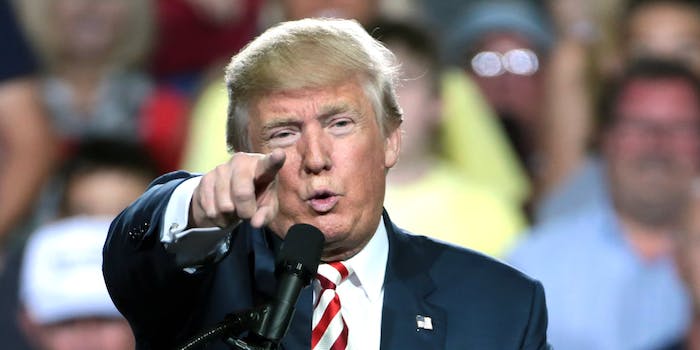 'Obviously, they are hoping to delay the answer until after November 3rd.'

President Donald Trump on Saturday suggested that the Food and Drug Administration (FDA) was purposefully delaying testing for a COVID-19 vaccine in an effort to harm his reelection efforts.

In a tweet directed at Dr. Stephen M. Hahn, the FDA commissioner Trump himself appointed, the president made numerous conspiratorial claims regarding efforts to combat the contagious disease.

“The deep state, or whoever, over at the FDA is making it very difficult for drug companies to get people in order to test the vaccines and therapeutics,” he tweeted. “Obviously, they are hoping to delay the answer until after November 3rd. Must focus on speed, and saving lives! @SteveFDA.”

Despite vaccines normally taking anywhere from three to five years to develop, Trump has pushed scientists to significantly reduce the timeframe, even though doing so could be dangerous.

It appears Trump, as revealed by his tweet, is more concerned about producing a vaccine to aid his reelection than actually saving lives.

Just last week, Peter Marks, director of the FDA’s Center for Biologics Evaluation and Research, stated in a conference call that he would resign from his position if the president hastily approved a vaccine that wasn’t shown to be safe and effective.

Several drug makers, including John Maraganore, the chief executive of Alnylam Pharmaceuticals, have since come forward to push back against Trump’s claims.

“Politics must stay out of the conduct and interpretation of clinical trials aimed at evaluating the efficacy and safety of Covid vaccines, as public trust in the results is paramount to ending the pandemic,” Maraganore told online publication STAT.

“One of the great things about FDA is that decisions are made by full-time civil servants without conflicts,” he said. “They work for the public health.”

Experts also note that COVID-19 vaccine development is already progressing at unprecedented speeds. Pushing scientists further could endanger not only trial participants but the public as well if an unproven vaccine is released.

Trump’s remark comes just days after his administration announced that it would permit individual laboratories to carry out vaccine tests without FDA review.

The president also criticized the FDA on Saturday for revoking its emergency use authorization for hydroxychloroquine, the anti-malaria drug Trump has repeatedly touted despite no evidence showing it to be an effective treatment for COVID-19.