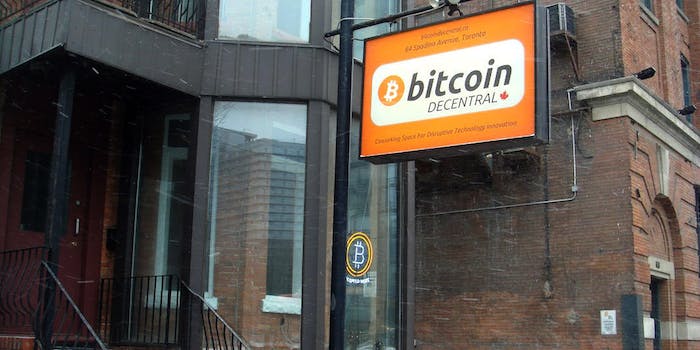 Everything I know about cryptocurrency I learned from a Bitcoin ATM

Turns out using a Bitcoin ATM is way easier than understanding Bitcoin. And that's the beauty of it.

In downtown Toronto, the intersection of King and Spadina is wide and lively, with streetcar wires intricately criss-crossing above clusters of harried business-type Torontonians with places to go, wearing $700 Canadian Goose coats and carrying Starbucks or Tim Hortons. The dilapidated hostel on the northwest corner is closing down; rumor has it, glossy condos are going up, something that happens frequently in the increasingly gentrified area.

This isn’t a hacker enclave or where you’d think a project trying to bring a radical alternative currency to the mainstream would settle.

But besides the hostel, there are a few other janky heritage buildings left standing near the corner, and one of them is now adorned with a bright, unmissable orange sign for Bitcoin Decentral. There’s a neon Bitcoin sign on the window for good measure. People in Toronto tend to keep their heads down and swathe themselves in peripheral-vision-destroying scarves during the Canadian winter, but they notice this particular building, even in flurries of cold snow. In the few times I’ve been there, I’ve seen passersby gawking, nudging each other to look and see.

When I first entered Bitcoin Decentral a few weeks ago, there wasn’t much to see. It’s a 5500 square foot heritage home, with beautiful bones, and soon, ideally all floors will be filled with startups focused on digital currency. Right now, though, only the first floor and basement are occupied, and renovations are still under way, so things feel a little slipshod. When I tiptoed in, it was nearly empty, save for a few chairs and desks haphazardly strewn about, and a slew of empty tallboy Canadian beer cans crumpled on the ground.

The ATM, a surprisingly slim machine, was unplugged in the back. A young Bitcoin enthusiast named Vitalik was the only person there, trying to get the Wi-Fi in the building up and running. He advised me to come back later. 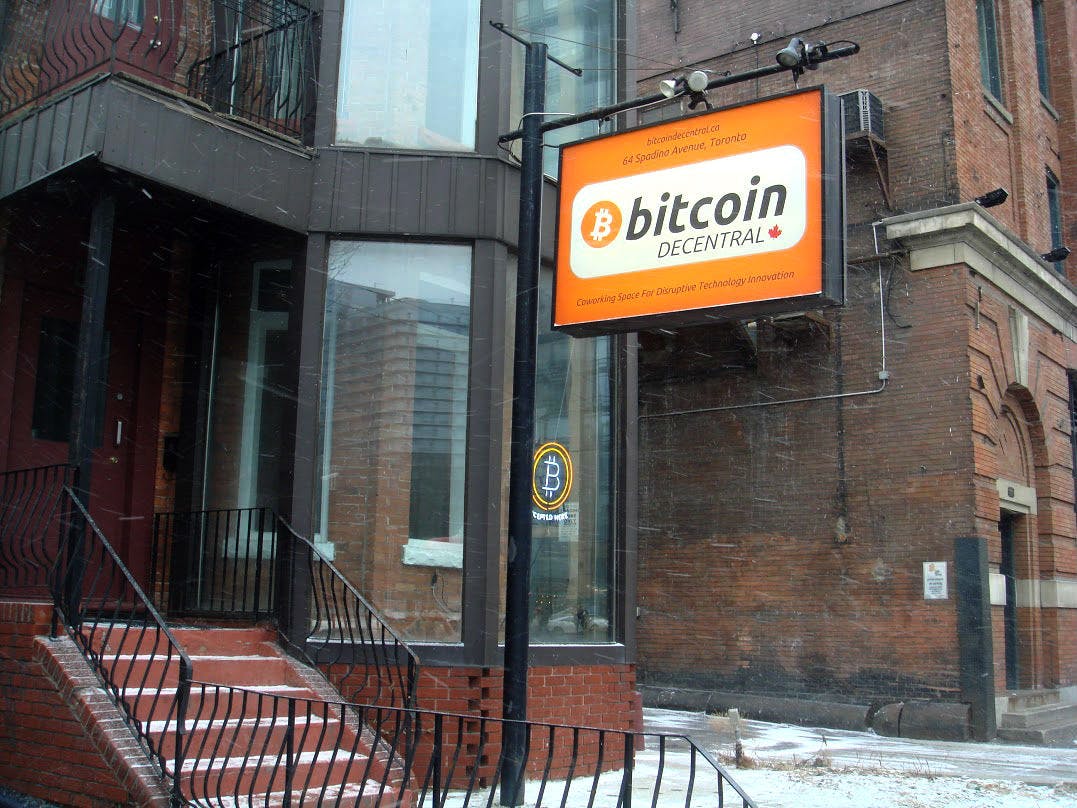 When I did come back, things were significantly less raggedy: a cleaning crew had de-beerified the floor, and the ATM was running and stationed in the front of the room. In the back, the desks and chairs were neatly arranged, with a spread of Bitcoin-themed magazines laid out at the tables.

I came back to meet with Anthony Di Iorio, the owner of this Bitcoin ATM as well as the executive director of Canada’s Bitcoin Alliance, but when I arrived to Bitcoin Decentral he was occupied, enthusiastically chatting with someone who’d walked in off the street. This is a common occurrence since the ATM officially opened last Wednesday; Di Iorio told me there’ve been hundreds of people coming in off the street to check it out and exchange their cash for bitcoins. 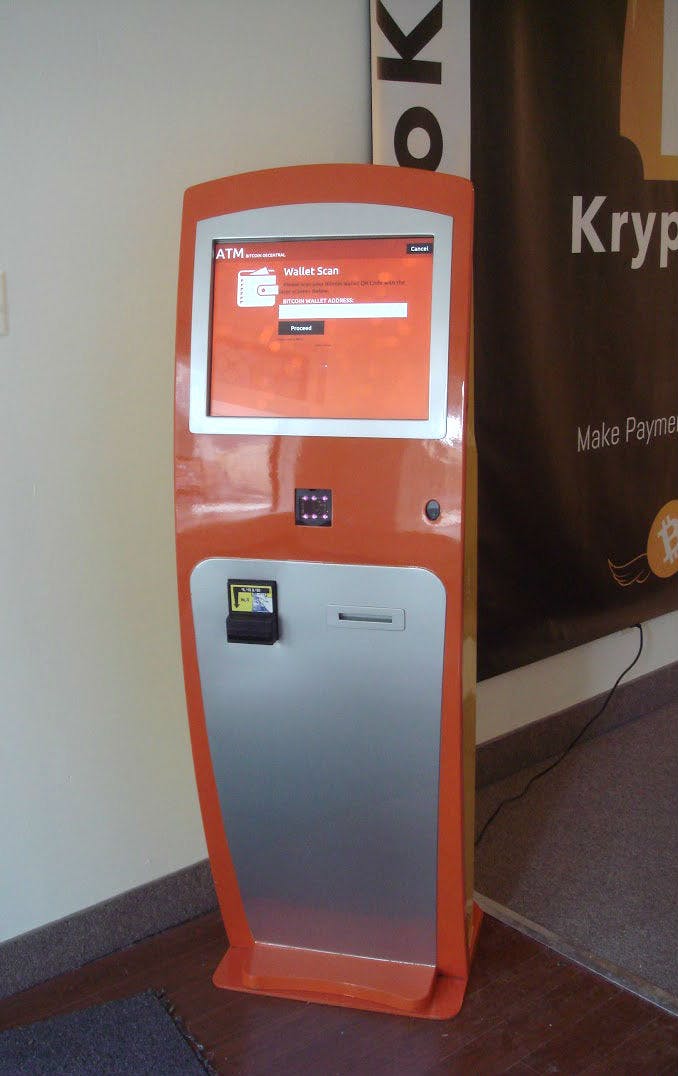 As the men chatted, I examined the ATM—the second operational Bitcoin ATM in the world (the other one’s in Vancouver—though a third opened in Ottawa this week). The U.S. doesn’t have any yet, stymied by stricter regulations, though that’s expected to change. Hong Kong is set to get one by the end of January, and a traveling Bitcoin ATM appeared at CES, bearing tidings of a future full of mobile Bitcoin transactions. There are also operational Bitcoin ATMs that opened in the past two months in Stockholm, Bratislava, and Helsinki.

But for now I am looking at something that is still a rarity: a Bitcoin ATM ready to take my money in exchange for bitcoins. The machine is a slender trapezoid, more of a kiosk, really—and to use it, you first have to have your own Bitcoin wallet. I wanted to test it out and figured I’d buy some bitcoins, just for fun, but I hadn’t thought ahead to set up a Wallet.

No problem. I downloaded Blockchain, a mobile Bitcoin wallet, on my iPhone. It sent me an SMS with a confirmation number, and then I was the owner of my very own and very empty digital currency wallet.

I fixed that pretty much immediately. The whole transaction took probably about 30 seconds; first, I pulled up the scannable QR code on my phone (in the Blockchain app) and held it up to the ATM’s webcam, so the machine would know which digital wallet to put the bitcoin. Then I slid a crisp new Canadian $20 into the machine. And then I was $20 CDN poorer and .02121 bitcoins richer.

Did I just make a wise investment or purchase the equivalent of a digital Beanie Baby? I honestly don’t know, but I do know that it was extremely easy. It’s definitely designed to ease people into their first Bitcoin purchases.

It wasn’t always so easy. Before Bitcoin attracted the imaginations of venture capitalists, journalists, and Winkelvii, it was a lot harder to get the digital currency. You could mine it, of course, but that takes a know-how and the right tools. (Mining isn’t meant to go mainstream.) Exchanges have cropped up recently, making it easier, but it’s not like popping into a Chase to grab some quick cash.

Anthony Di Iorino didn’t mine his personal supply of bitcoins, he bought them a few years ago when they were $10 a pop. And now he wanted to make the process simpler for the next wave of Bitcoin users. In addition to serving as the executive director of the Bitcoin Alliance (which is kind of like Canada’s answer to the Bitcoin Foundation, a nonprofit that raises awareness and spurs development of the cryptocurrency), Di Iorino created Bitcoin Decentral, which serves as home base for his Chrome Extension KryptoKit, which facilitates one-click Bitcoin payments. Moreover, Di Iorino purchased and runs the ATM himself (and collects commission himself). In fact, all of the bitcoins people are purchasing from this flagship location are coming out of his personal wallet, though he intends to change that soon and use an exchange.

Di Iorino has five more Bitcoin ATMs on the way, all from the Ottawa manufacture BitAccess, and he plans to sprinkle southern Ontario with these kiosks.

I asked Di Iorino why he chose BitAccess instead of Robocoin, the company that made the ATM in Vancouver. “The guys from Ottawa contacted me and said they had an ATM ready, I went to see them and it was available for purchase right away,” he explained. “There was a big wait for the ones in Vancouver. Plus, these were cheaper machines, and Canadian-made.”

Right now, the Toronto Bitcoin ATM goes one way, meaning you can purchase Bitcoin but you can’t sell it. But Di Iorino plans to retrofit his ATMs to allow both types of transactions in the next few weeks.

Di Iorino has other plans in motion besides retrofitting. He’s slowly filling the old, empty building with startup allies, including a company called Satoshi Fashions, an apparel line named after the mysterious founder of Bitcoin, as well as Ethereum, his latest project.

Ethereum is actually an entire separate digital currency Di Iorino is working on to complement Bitcoin. “Bitcoin is very good at sending transactions, but it struggles to do a lot of other financial transactions,” he says. “The team I’m working with now have fixed some issues that the creator of Bitcoin couldn’t address when Bitcoin was created, so we’ve created this platform that will be able to do any type of financial transaction possible. Smart contracts, smart property, all of these different things. I’m really excited—it’s the most exciting project I’m working on.” Supporters are referring to Ethereum as a “crypto-currency 2.0,” something that takes the foundation laid by Bitcoin and smooths over the rough patches.

So does Di Iorino see a conflict in creating a new digital currency while supporting Bitcoin? I asked him, but before he could answer his phone rang and he had to take a call. While waiting, I started flipping through YBitcoin, one of the magazines splayed out on the table. In it, there was a promotional page for a conference in Berlin next month. “Our panel of top venture capitalists will discuss what business opportunities are on the horizon,” it read. Advertisements like these, for conferences and forums filled with venture capitalists eager to turn hype into money, continue to crop up as Bitcoin creeps into mainstream adoption. 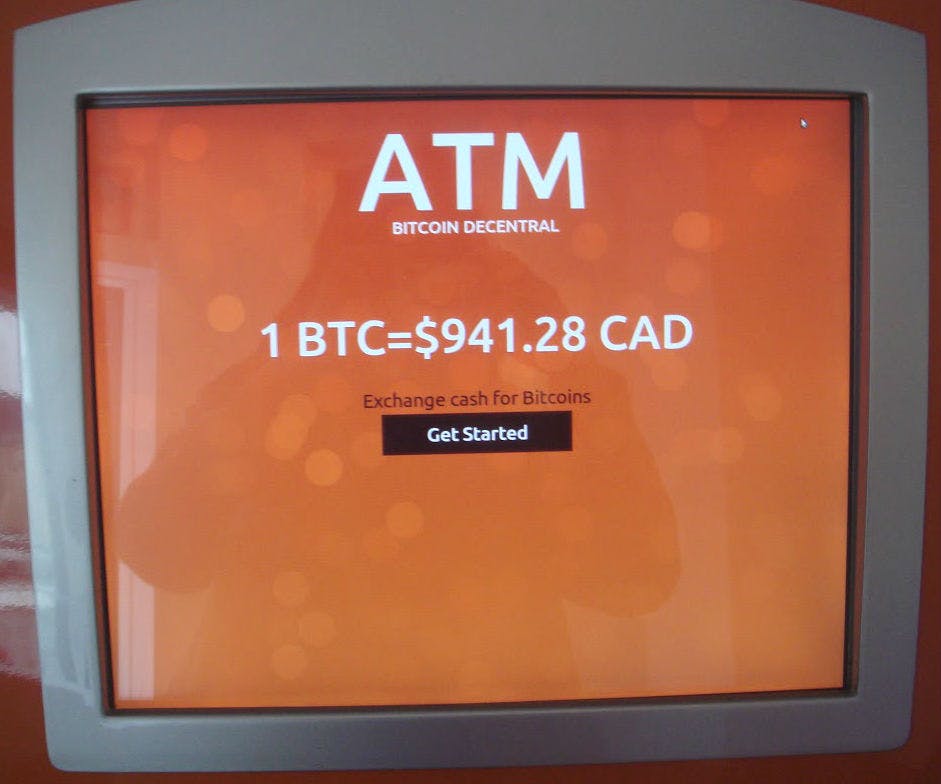 Di Iorino is clearly passionate about Bitcoin and the digital currency community, especially in Canada. He eventually returned to the table and assured me that he saw a future where Bitcoin and Ethereum both flourished. And he means what he says; he wants them both to flourish. He uses Bitcoin Decentral to arrange meetups every week—every Wednesday, he says, encouraging me to come. He even runs Bitcoin 101s to help people understand the concept better. He’s not just in this for the money; he is a true believer.

But of course, the money also matters. Di Iorino is a shrewd businessman, which gives the Bitcoin ATM legitimacy, but also underscores something about the currency’s future that may unsettle some of its early crypto-anarchist supporters: Yes, Bitcoin may be a political statement, but it’s also getting adopted as a payment system and a currency by capitalists of varying degrees of wolfishness. This rising tide of Bitcoin ATMs represents greater accessibility to normal people like me who shamefully withdrew from Econ 101 after failing the midterm and who don’t really understand the math behind Bitcoin.

These machines are also made to let people abandon their bitcoins for dollars backed by central governments, yoking the digital currency closer towards the types of currencies it was originally trying to radically disrupt. From dollars you came and to dollars you shall return.