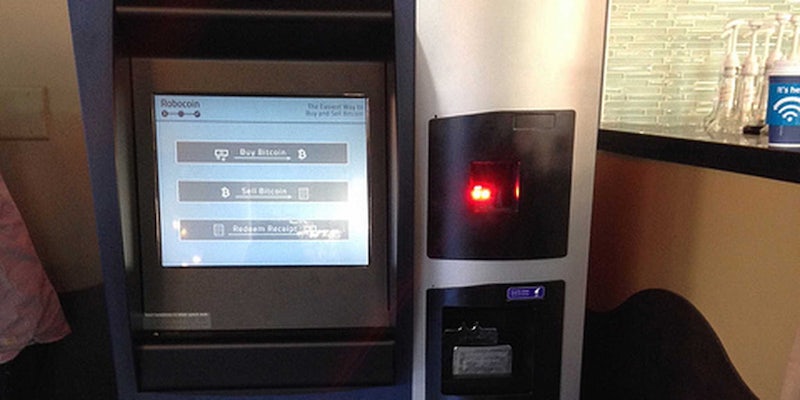 The ATM is located in a Vancouver, Canada, cafe.

In its first week, the Bitcoin ATM, located at a coffee shop in Vancouver, traded more than $100,000 CDN worth of the cybercurrency, though it’s unknown how many unique users took advantage of the new service.

Reaching the $100K mark was no doubt aided by the fact that Bitcoin is currently trading at an all time high. On Monday, a single Bitcoin traded for as much as $372 U.S., according to Mt. Gox, the world’s leading Bitcoin exchange.

It’s a tremendous rise for an experimental cryptocurrency that started the year trading for less than $10 and has experienced numerous crises of confidence in recent months. In the past month, the price of Bitcoin has steadily increased from $140 to its present, record value.

As the price has gone up, there have been numerous efforts to add legitimacy to the currency. Bitcoin was anonymously created four years ago as unregulated digital currency that could be spent like cash online. Because of its experimental nature, Bitcoin has been dismissed by many, but supporters are eager to prove it’s here to stay.

Though Nevada-based Robocoin has been building the machines for a while, stringent government regulations—especially in the United States—have kept operators from installing them. That is, until the end of last month, when the three teenage owners of Bitcoiniacs established their first location in their hometown of Vancouver. The Bitcoiniacs spent $18,500 on the machine, with plans to set up several more throughout Canada.

Though they divulged their gross transaction amount to the public, the operators of Bitcoiniacs would not detail just how many users tried out the machine in its first week. It’s clear the sum came from more than just a few users, because Canadian money laundering laws prevent anyone from depositing more than $3,000 Canadian a day into the machine. A palm scanner on the machine itself prevents users from exceeding the daily deposit limit without forfeiting their anonymity.

Mitchell Demeter, one of the ATM’s owners, told the Vancouver Sun that the number of daily users so far has exceeded his expectations. The machine has also had the added effect of boosting general interest in Bitcoin.

“We knew people would be excited and interested,” Demeter said. “I’m a little bit surprised by the amount of new people who are excited about it and just coming out and learning.”

The success of Bitcoiniacs’ machine and Bitcoin’s stratospheric trading price is cause for joy for a lot of Bitcoin boosters, but there is still plenty of risk associated with the currency. A lack of regulation can mean a lack of security, as several panics resulting from technical glitches at Mt. Gox proved earlier this year. And the looming threat of a government crackdown could make the entire system worthless or relegate it to the dark corners of the Internet.