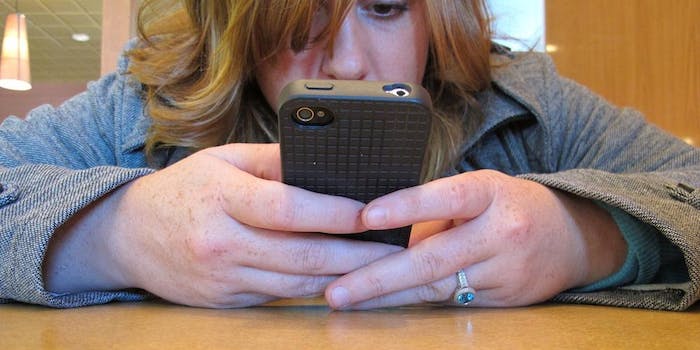 Why is Tinder so addictive? Here, let science tell you

Basically, what it comes down to is that humans are really, really bad at flirting IRL.

We’ve all been there: It’s 3 a.m., you’re exhausted and you have to be at work for a meeting in five hours. Still, you’re lying in bed obsessively swiping through Tinder until you wake up with circles under your eyes and carpal tunnel in your thumb.

But why, exactly, is Tinder so addictive? Science says there’s actually a pretty simple reason: Because humans are really, really bad at flirting, and Tinder is one of the few ways that let you know for sure if someone is interested.

So exactly how bad are we at flirting? According to researchers from the University of Kansas, the issue is not that we’re unskilled at the art of the pickup per se. It’s that we have absolutely no way of telling if someone is interested.

After watching 52 strangers flirt with each other in a room for 10 minutes, the researchers found that the men and women in the study could only tell if someone was flirting with them 36 and 18 percent of the time, respectively. They could, however, accurately determine if someone wasn’t flirting with them, correctly identifying their conversation partner’s lack of romantic interest 80 percent of the time. (Considering my own experiences at college parties, that percentage sounds about right).

For the second stage of the study, the researchers asked 250 men and women to watch tapes of the couples in the first stage to assess whether or not they were flirting. The results were only slightly better. Men had a 38 percent success rate at picking up flirtation cues, while women could identify flirting only 22 percent of the time.

So what does this study say about flirting and gender? Well, for one thing, there’s clearly a significant gap between men’s ability to pick up on flirtation cues and women’s ability to do same. (Take that, well-worn stereotype that women are somehow more “intuitive” and better at reading emotions than men!).

But what’s most important about the study is that it points to exactly why apps like Tinder have been so successful. By taking all the pesky guesswork out of the flirting game, Tinder has made it so gauging romantic or even just sexual interest is as simple as a split-second thumb swipe. Whether or not that’s a good or bad thing is up for debate. But if nothing else, it’s made pre-hookup convos at college parties a hell of a lot less awkward.