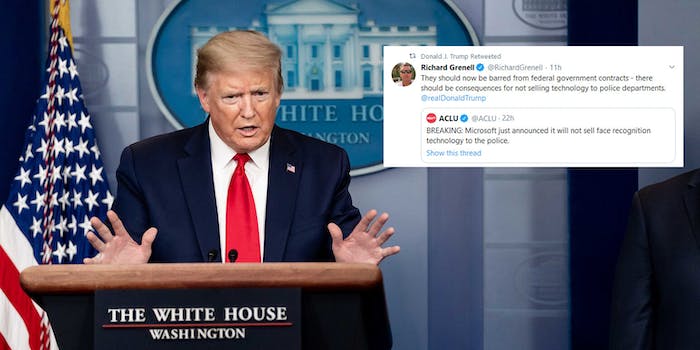 President Donald Trump on Friday appeared to make his stance known about facial recognition technology being used by police when he retweeted a former member of his administration who called for Microsoft to be banned from getting government contracts.

The president retweeted Richard Grenell, the former acting director of national intelligence, who criticized Microsoft’s announcement that they would not sell facial recognition tools to police until there was federal legislation surrounding the technology.

Facial recognition’s use by police has gained more attention in recent days as protests against police brutality and racism continue across the country in the wake of the police killing of George Floyd.

Members of Congress have noted that facial recognition has been used as part of federal surveillance of the protests and privacy and racial justice advocates have long warned about the technology’s use by law enforcement.

The technology has been found to have a racial bias. A push led by activist organizations has been calling for an outright government ban on the use of facial recognition for months.

Microsoft’s announcement came after IBM told members of Congress it would no longer offer its facial recognition tools and Amazon said it was placing a one-year moratorium on police using its tool, Rekognition.

Amazon’s decision has been criticized by advocates for not going far enough.

However, Grenell seems to think that Microsoft’s announcement is grounds for punishment.

“They should now be barred from federal government contracts – there should be consequences for not selling technology to police departments. @realDonaldTrump,” Grenell tweeted early Friday.

Microsoft President Brad Smith told the Washington Post on Thursday that it would not offer their facial recognition tools to police departments until there were federal laws regulating the technology.

Smith added that the company has not supplied the technology to police departments.