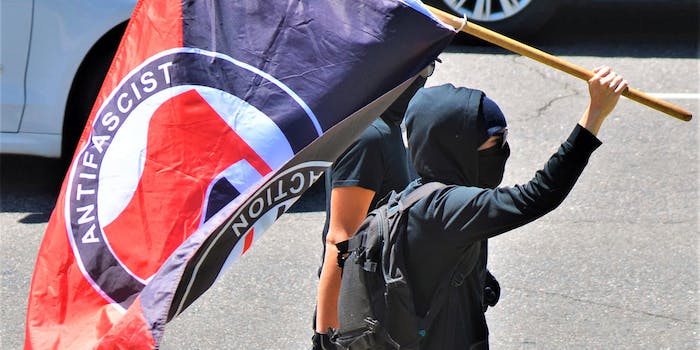 The dangers of Trump’s efforts to label antifa ‘terrorists’

His words could have consequences.

When Americans debate what to do after seeing videos of certain groups committing violent acts against other Americans, there is often a knee-jerk reaction to label it “domestic terrorism.”

Sometimes an act is legitimately domestic terrorism, such as the many mass shootings the U.S. has endured over the years. But civil liberties experts warn that the more calls for groups to be labeled as domestic terrorists, the more broadly that term may be applied, and the consequences could be dire.

President Donald Trump tweeted on May 31 that the United States “will be designating ANTIFA as a Terrorist Organization,” as he attempted to blame looting and property damage that has occurred during the George Floyd protests on leftists. He has since repeatedly referred to the group as terrorists.

While Trump has taken no action to officially designate antifa as a domestic terrorist group, and there’s arguably currently no way for him to do that, the effects of Trump and Barr’s actions could have a serious impact on people’s ability to exercise their First Amendment rights.

Antifa is not, in the first place, an organization.

It is a term for a highly decentralized network of leftist activists who are anti-fascists, which usually means they’re protesting neo-Nazis and other racists. Because it’s not an organization or even a nationally organized group, broadly labeling antifa as domestic terrorists could lead to a situation where anyone on the left that the president and the attorney general disagree with could be labeled as antifa and punished for participating in protests.

Some would argue it’s already begun. Trump said on Tuesday that a 75-year-old man the Buffalo, New York police shoved to the ground recently for no apparent reason was possibly secret antifa.

Jason Blazakis, a professor and director of the Center on Terrorism, Extremism, and Counterterrorism at the Middlebury Institute of International Studies, told the Daily Dot that there is currently no way for the president to label any domestic group as a terrorist organization in the first place.

“In the United States, there aren’t any laws that would provide for the designation of an explicitly domestic group to be sanctioned as a terrorist organization,” Blazakis says.

The U.S. does label foreign organizations as terrorist groups, and there are two ways that can happen.

One is that the State Department can designate a foreign organization as a terrorist group, and the other is a Treasury Department list of terrorists, created by executive order by President George Bush shortly after 9/11.

The first process wouldn’t apply because the statutory authority is limited to foreign groups. The existing executive order also wouldn’t work, because it was issued primarily under the authority of the International Emergency Economic Powers Act, which is a law that applies specifically to threats that emanate largely from outside the United States.

Trump could theoretically issue a new executive order designating antifa as a domestic terrorist group and lay out consequences for being part of the group or supporting members of that group in any material way, but Blazakis says that would be “legally fraught and subject to a pretty quick court challenge,” since he most likely wouldn’t have the statutory authority to do that.

The FBI informally labels some groups as domestic terrorists, but that only determines how agents approach investigations.

Trump doesn’t directly determine who the FBI should consider to be terrorists or not, but considering Attorney General Bill Barr and him seem to be in lockstep on this issue, Barr could certainly intervene and push the FBI to start treating antifa this way.

“You can use the rhetoric, you can internally guide your agents to try to consider a group to be a domestic threat, but in practice, they don’t have the statute to charge them necessarily,” Blazakis says.

One major problem is that the attorney general labeling antifa as a terrorist group opens a doorway for law enforcement agencies, such as the FBI, to increase surveillance on people who participate in protests and use other means of disrupting First Amendment-protected activities.

A report from 2017 found that the Department of Homeland Security and the FBI have already referred to antifa as “domestic terrorists” in classified reports, but it’s unclear if that has affected how these agencies direct their investigations. The rhetoric could increase these agencies’ focus on alleged antifa activity.

There have also already been reports that the DEA is surveilling protesters. House Democrats on the Oversight Committee have called for the Department of Homeland Security to explain why this is being done and have claimed it could violate Americans’ right to peaceably assemble. Blazakis says there could be a “significant violation of privacy and civil liberties” as law enforcement agencies surveil activists under the guise of “investigating” antifa.

Shirin Sinnar, a professor of law at Stanford University, tells the Daily Dot that simply having high-level officials stating that antifa is a terrorist group can have many consequences regardless of if Trump is actually able to officially label.

She says it can change how law enforcement and Trump’s supporters behave toward these protesters and can cause people to become afraid to protest.

“You’re not going to know the details of the laws that are available or not when high-level officials are branding it in that way,” Sinnar says. “It can make people change their behavior—not just those who are engaging in violence but broader movements who are worried about being painted with the same brush.”

Sinnar says she’s also specifically worried about Attorney General Barr having FBI Joint Terrorism Task Forces investigating activists who may or may not identify as antifa.

These task forces have been criticized heavily over the past couple decades because they’re not subject to much oversight. They operate at a regional level, and they bring together federal and local law enforcement officers to collaborate on investigating threats in their areas. Once a police department is participating in a task force, some of the state and local regulations it usually has to operate under are often thrown out the window.

“Even cities and counties that are keen on really regulating their police and making sure that their behavior is supervised through a democratic process—they don’t really have the ability to do that once their local officers start participating in these joint terrorism frameworks, which often involve requirements that go against local law,” Sinnar says. “The second problem—and why the lack of oversight is particularly troubling—is that there are always concerns about surveillance of legitimate political activity or religious activity, for that matter, and how a lot of the terrorism frameworks that are set up, especially those involving the FBI, end up surveilling those sorts of activity in the guise of investigating actual threats of violence.”

As the Intercept reported at the end of last year, a joint task force between the FBI and the San Francisco Police Department frequently violated local laws and the SFPD’s internal policies for years before the SFPD was removed from the task force in 2017.

These policies were meant to prevent the police from doing surveillance based on someone’s political or religious affiliation. Sinnar says this is not an unusual occurrence.

Trump may decide to issue an executive order labeling antifa as terrorists, and it would likely end up in the courts and be struck down, but it could do some damage in the meantime.

Regardless of if he actually takes any actions to pursue the labeling them as terrorists, the effect of the president and the attorney general calling protesters “terrorists” could be profound.