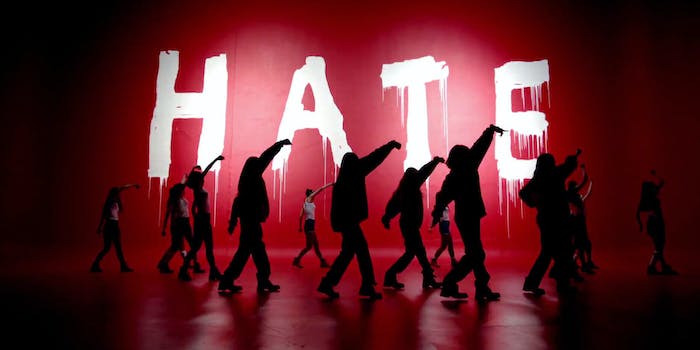 Inside the war between 4chan and K-pop.

K-pop stans have become unlikely vigilante heroes in the online fight against racism.

In recent weeks, fans of Korean pop music, or K-pop, have stormed hashtags promoted by racists reacting to #BlackLivesMatter and #BlackoutTuesday, posting GIFs of their favorite stars, often alongside statements opposing racism.

The method has been extremely successful at minimizing the reach of racist posts.

K-pop supergroup BTS even appeared to support the algorithmic battle its fans were fighting with racists.

On June 4, BTS tweeted in Korean and English, “We stand against racial discrimination. We condemn violence. You, I and we all have the right to be respected. We will stand together. #BlackLivesMatter.”

K-pop stans fighting online racism is one of those glorious internet phenomenons that give people hope for humanity.

But for their opponents, it’s an outrage.

“As you all have witnessed, in the past weeks ‘kpop stans’ (= underaged white fangirls) have hijacked anti-BLM hashtags on Twitter and spammed them with their annoying fancams they used to spam on every trending hashtag,” the 4chan user complained on Saturday.

They urged their 4chan followers to retaliate by spamming K-pop hashtags with pro-Black Lives Matter content; using anti-Black Lives Matter trending hashtags to spam K-pop with redpilled captions; posting pics of K-pop stars in blackface tagged #KPopisracist; and using #KPopforTrump “so that they can’t hijack the message and spin it to marry their narrative.”

“Remember to check trending hashtags in the US. If you’re not american just set the trending # and topics to be from the US in the explore section settings,” they advise. “Another good tactic is to check @YourAnonCentral and @YourAnonNews since they usually start the kpop stans’ ops against ‘racists.'”

The post links to a page with scores of GIFs and memes, most comprising racist captions over images of K-pop stars. “In this thread we counter the kpop shills on twitter by creating gifs and videos of kpop with right wing caption,” the page is captioned.

A couple of Twitter accounts appear to have already heeded the call.

It remains to be seen how effective 4chan will be, if at all, in their battle for internet dominance on racist hashtags.

It may be even more interesting to see how K-pop stans respond.