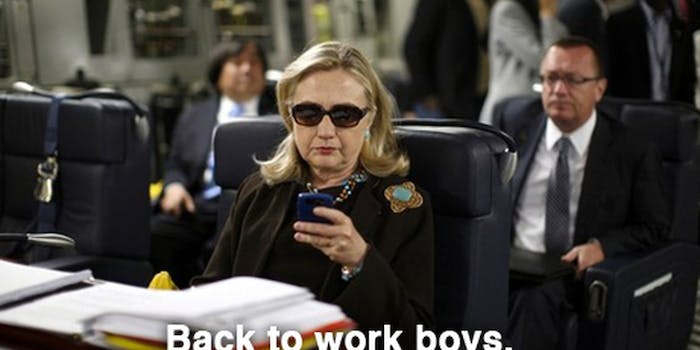 Texts From Hillary calls it quits

"“As far as memes go – it has gone as far as it can go," the blogs' creators posted on Wednesday morning.

The parody Tumblr, which contrasted a serious-looking photo of Clinton texting on her phone with a not-so-serious picture and caption, will stop accepting and posting new submissions immediately, according to a note on the blog.

“As far as memes go – it has gone as far as it can go. Is it really possible to top a submission from the Secretary herself? No,” wrote creators Stacy Lambe and Adam Smith on Wednesday. “But then when you get to text with her in real life – it’s just over. At least for us. But we have no doubt it will live on with all of you on the Internet.”

Since its launch last week, the blog garnered over 45,000 followers, global press coverage, and even a submission from the secretary of state herself. The site won’t be mothballed and will remain up; it just won’t be updated. The note quickly garnered more than 500 notes in an hour.

“It turns out that memes really do come true,” wrote Lambe and Smith at the end of the farewell letter.

As Clinton “texted” in one of blog’s submissions, “Back to work boys.”