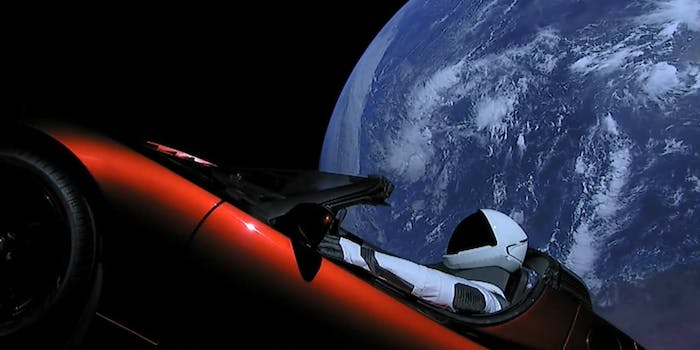 Watch a livestream of Elon Musk’s Tesla floating through space

The electric vehicle has a long road ahead.

You can now watch a Tesla float peacefully through space. No, I’m not referring to a Terrence Malick-directed sci-fi film or some obscure ’80s rock lyrics. A Tesla is actually floating through space right now—and it’s heading for Mars.

Elon Musk posted a link on Twitter to a livestream of the cherry red first-generation Tesla Roadster he launched into space aboard his SpaceX Falcon Heavy rocket earlier today.

Unfortunately, there’s is no audio, so you can’t hear it playing David Bowie’s “Space Oddity” on repeat. You can, however, get a good look at the Stig-esque dummy named “Starman” in the front seat rocking the aerospace company’s stylish spacesuit. The video is jumping between three cameras mounted to the car.

After detaching from the main Falcon Heavy core earlier today, the Tesla sports car began a “billion year” elliptical journey around Mars’ orbit. Of course, it will inevitably be discovered by aliens—but don’t worry, Musk has already thought it through.

“Test flights of new rockets usually contain mass simulators in the form of concrete or steel blocks. That seemed extremely boring,” SpaceX founder Elon Musk wrote on Instagram last year. “Of course, anything boring is terrible, especially companies, so we decided to send something unusual, something that made us feel.”

While you might quickly lose interest in looking at a red Tesla with a black backdrop, things are about to heat up—literally. The car is set to coast for around five hours near Earth’s Van Allen Belt, where it will be subjected to intense radiation. If all goes well, the vehicle will attempt one more burn and start a six-month journey to Mars’ orbit.

“There’s going to be a bunch of sensors on the upper stage [of the rocket], so we’ll get a lot of data back, but I think the most fun stuff is going to be the three cameras that are mounted on the Roadster,” Musk said on Monday. “They should really provide some epic views if they work and everything goes well.”

It’s not clear how long SpaceX will keep the livestream active or how far the signal will reach, so enjoy the bizarre views while you still can.