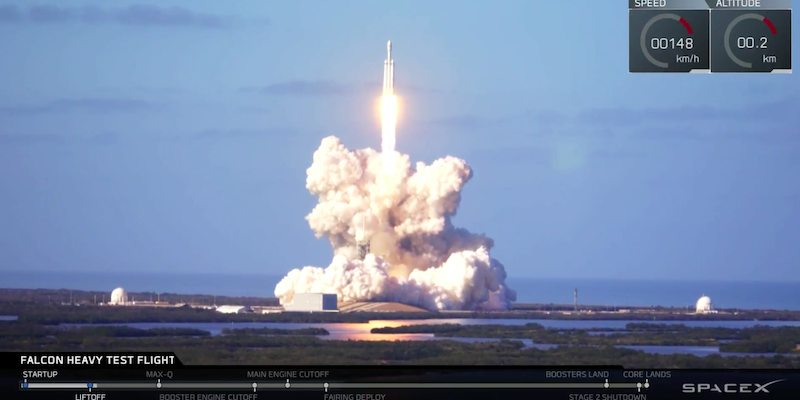 In one of the most impressive displays in spaceflight history, SpaceX successfully launched its Falcon Heavy rocket Tuesday.

Consisting of three Falcon 9 rockets strapped together, the 3-million-pound spacecraft took off with a loud roar at 3:45pm ET as its 27 Merlin engines came to life, shooting out massive plumes of smoke and blinding flames.

Within minutes of takeoff, the test rocket was in orbit. Soon after, both side-mounted Falcon 9s detached from the central core, turned around, and flew back to Earth before making a spectacular simultaneous landing at Kennedy Space Center in Cape Canaveral, Florida. Back in space, the central core fired off its nose cone, sending an electric vehicle payload on a trip around the sun.

We’ll have to wait for official word from SpaceX, but it appears the flight went off without a hitch. Prior to liftoff, Musk repeatedly spoke about the risks of the maiden flight, joking it would either be “a great rocket launch or the best fireworks display” we have ever seen.

Because of the risks of it exploding, SpaceX CEO Elon Musk put the “silliest thing” he could think of on board the rocket. He settled on his personal “midnight cherry” first-generation Tesla Roadster playing David Bowie’s “Space Oddity.” As a final touch, a dummy named “Starman,” wearing SpaceX’s fashionable spacesuit was placed in the passenger seat, and a miniaturized, Hot Wheels-sized version was on board as well. Three cameras were mounted to the vehicle, giving us an extraordinary view of an electric car flying through space.

The car will now coast for around five hours near Earth’s Van Allen Belt, where it will be subjected to intense radiation. If it makes it through, the EV will attempt one more burn and start a six-month journey to Mars’ orbit.

“I love the thought of a car drifting apparently endlessly through space and perhaps being discovered by an alien race millions of years in the future,” Musk tweeted earlier this year. After the launch, the business magnate posted a livestream of the car floating peacefully through space.

Unfortunately, SpaceX’s livestream cut out before we learned the fate of the central core. SpaceX has not said whether the central core landed safely. If all went to plan, the remaining core did a slick turning maneuver and dropped down to Earth, landing back on “Of Course I Still Love You” drone ship in the Atlantic Ocean.

You can watch the full flight in the video below starting at 29:50.

The Falcon Heavy is important to SpaceX because it can lift more payload than any rocket since the decommissioned Saturn V—and far more than other operational rockets. It’s capable of lifting more than twice the payload—140,000 pounds—of the next closest operational rocket, the Delta IV, but costs one-third the price at $90 million. Compared to the Falcon 9, the Falcon Heavy has triple the thrust and nearly three-times the lower-Earth payload capacity. To bring this comparison down to Earth [editor’s note: groan] , the Falcon Heavy has a thrust equal to 18 Boeing 747 airliners.

By showing that it can successfully launch and bring back its Falcon Heavy, SpaceX can now look to secure contracts from the government and private entities wanting to send heavier payloads into orbit. The rocket is already contracted to send three telecommunications satellites and weather forecasting satellites commissioned by the U.S. Air Force into orbit. Incredibly, SpaceX said last year that two unnamed individuals have “already paid a significant deposit to do a moon mission.”

Today’s launch also proves SpaceX’s ability to expand on the success it had with the Falcon 9, an indication that it may have what it takes to get us to Mars, the ultimate goal set out by Musk. SpaceX previously said the Falcon Heavy is capable of traveling to the Red Planet, though it has plans to build a larger rocket called the BFR (Big Fucking Rocket) for future flights.

First announced in 2011 and scheduled for space in 2013, today’s launch was a long time coming for the private aerospace company. Now that the two side rockets have successfully landed back on Earth, they can be refurbished and readied for the next launch.

We will update this article when we learn what happened to the central core and Mars-bound Roadster.