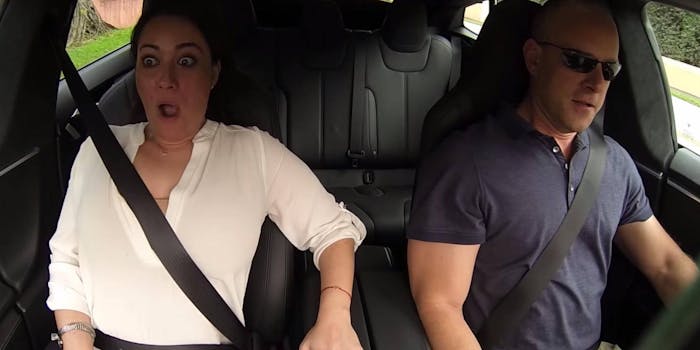 YouTube channel DragTimes is at it again, but this time it’s with the new Tesla Model S P85D.

Announced last year, the P85D is Tesla’s crazy dual-motor, all-wheel-drive version of its luxury sedan. The results produce crazy levels of speed and torque. There’s literally an “insane mode” on the car.

Drag Times put unsuspecting passengers in the car, launched it into insane mode, and just floored it. The reactions were hilarious, to say the least.

We’ve actually gotten some hands-on time with the P85D, and can attest that the mode lives up to its name: It really is that insane. The immediacy of the acceleration is unlike anything else. The car hits 100 mph without breaking a sweat. The result? You feel like you’re riding a rollercoaster; your head and insides just recess into the back of your seat.

We recommend finding a buddy, an acquaintance, or even a random guy on Craigslist who owns a P85D (safety advised) and calling them right away for a ride.